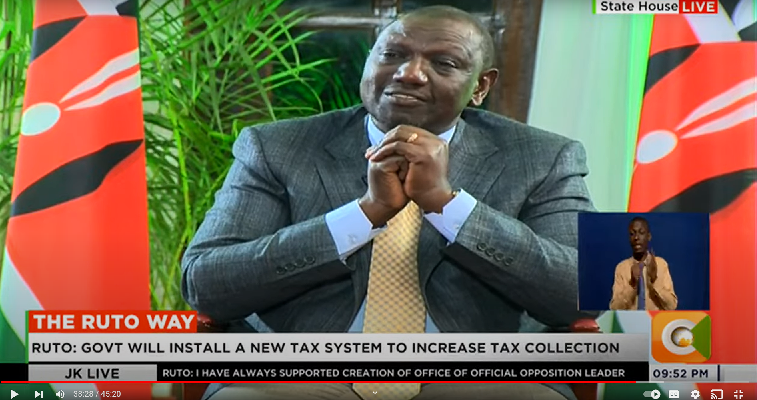 Kenyan President William Ruto held an inaugural interview (video here and here) last Wednesday where he invited the media to State House to discuss and clarify various matters affecting Kenyans at the moment. The interview received quite a reaction from Kenyans, especially considering how the president answered some of the questions. There are those who were in awe of how he presented himself, but there were also a good number who were left wondering if their voices will ever mean anything in this country. Many were left wondering how they are going to survive while others have simply given up on the government and are now working on ensuring that their family and themselves are well off, regardless of how the economy is.

As it stands, a lot of Kenyans are suffering due to various factors such as high inflation of prices, insecurity, unemployment and increase in taxation. It is therefore not surprising that questions related to such topics were the major themes during President Ruto’s interview.

Kenyans wanted to know how the president planned on dealing with the issue of insecurity, especially in gang-prone areas. The president declared he would put all his effort into dealing with the increase in crime. The president then went on to discuss the Hustler fund, an entity that provides loans to Kenyans at more affordable rates than entities such as banks. He was asked to explain why the Hustler Fund Initiative did not have a board of directors as stipulated by the law, making it very difficult to hold anyone accountable in case of any mishaps. President Ruto defended his initiative by explaining that the initiative did not have a board because it was being run by technology which was faster and apparently more transparent as compared to a human. This statement turned a lot of heads, especially after the president continued to state that in February the government plans to introduce a savings account option as well as offer loans to not only individuals and businesses but to also SACCOs and CHAMAs (a CHAMA is an informal cooperative society that saves and invests money). Ostensibly, this seems like a really good idea but the fact that there is no true form of accountability has left many in doubt. This is because even if the President says he will bear the consequences if the initiative fails, the chances of anyone holding him accountable are slim to none.

The next issue that was discussed was the high rate of taxes. A lot was said but what William Ruto really emphasized was the fact that every collectible tax will be collected after the Kenya Revenue Authority has a 2.1 trillion Kenya shilling target to achieve. When Ruto said every collectible tax will be collected he definitely meant it, because in the last week of 2022 word of mobile-to-bank transaction fees being reintroduced had already spread. This hit Kenyans hard and this is because the current state of the economy is so expensive, hence every penny is that more precious. The government even declared that online businesses will now be taxed and platforms such as Netflix and Spotify will also start applying the 16% Value Added Tax (VAT). Moreover, if the government proceeds, even high school leavers that are 18 years and anyone else above the age of 18 would be taxed. That might just happen since the president already insinuated that they should have Kenya Revenue Authority (KRA) Pins. 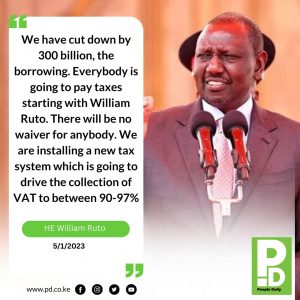 Ruto then went on to discuss the current state of education in Kenya and what plans the government has to further the education sector. This was by far the most controversial topic discussed during the interview. The president was asked was his thoughts were on a competency-based curriculum (CBC). He began by stating, ” Every parent thinks about the education of their child. That is why this is a very emotional and important topic.” He stated that in order for CBC to fully flourish the government still needs to sit down and work on making some improvements but all in all he believes that adopting CBC was the right choice. He further addressed the concern of the junior secondary since parents were worried that schools in their area do not have the facilities to conduct such a program. President Ruto argued that there were enough classrooms in all primary schools across the country to conduct the program hence parents should not worry. Furthermore, Ruto stated that the issue of facilities such as laboratories would take some time to construct hence schools that lacked such facilities would have to share space with nearby high schools that had their own. This did not really do much to encourage parents since all of them want to ensure their children get the best education that they can give. However, since there is little that they can do they have been forced to hope that what the president said were not just false assurances.

The discussion on education did not end there. Ruto moved on to discuss on the issue of the Higher Education Loans Board (HELB). He declared that the government planned on discontinuing the HELB loan and this one statement has crashed the hearts of many Kenyans. The HELB loan is the reason that so many Kenyans have been able to attain higher education, without it a majority of Kenyans would have never gone to university. The existence of the HELB loan proved to Kenyans that the final equalizer in life is education, it did not matter if you were rich or poor you still had a shot at succeeding in life. The existence of the HELB loan motivated even those in rural areas to work hard since they knew their efforts had a good chance of bearing fruit later on in the future. Plenty of Kenyans, including government officials, would not have had jobs or been in the high positions they are currently in without the existence of HELB and yet that very same government that benefited from it want to scrap it off. Additionally, this comes at a time when universities want to double the school fees. A good number of the public have been left either at a loss of what to do or are disappointed with the government’s actions. The president argues that the reason for removing HELB is because he plans on starting a National Skill and Funding Council that will supposedly eradicate HELB loan interests. This is because education funding will double from 11 billion to 22 billion. 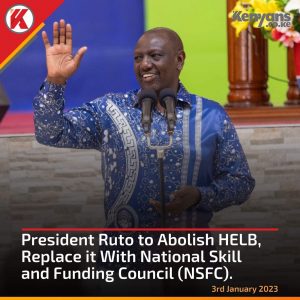 “The government will establish the National Skill and Funding Council that amalgamates Helb, TVET, and University Funding Board,” Ruto said.

His new funding initiative will be interest-free, hence on paper it looks like the better option. Nonetheless, if one looks at Kenya’s current situation as well as the numerous reminders that we have had from our president since last year, the government does not have money so people are wondering how exactly will this initiative work. Where will the 22 billion come from? Can merging the three existing education boards really makes things that much cheaper? If the government really does not have money, how will it be possible to offer these loans to students without any form of interest? Moreover, the fact that Ruto declared that those from rich families will not be able to apply for the new initiative and yet this was a right everyone was entitled to as long as you worked hard in your studies and did well, did not sit well with everyone. The topic definitely caused an uproar among Kenyans, and after Ruto’s interview many either went online while some went on live media to air their grievances. University of Nairobi Student Association (UNSA) chairperson Melvin Thogo has publicly rejected the president’s new plan and has argued that his plan will not benefit anyone and should not be allowed to pass. “While this may look attractive at face value, this is the easiest way to disenfranchise students of this fund,” Thogo said.

Citizens online are wondering why the president could not have focused on improving the HELB loan process rather than scrapping it completely.

With the recent turn of events, some people are starting to believe the president simply wants to remove working government initiatives in order to replace them with his own. All in all Kenyans are frustrated: fuel prices have not gone down, basic necessities are still expensive, electricity charges have gone up, student fees in university are expected to increase and yet there is little the government has done. There are people who are even saying that William Ruto’s government has been cruel to the poor and yet the reason he entered into power was so that even the poor can have a voice; he was celebrated by his supporters as the man who would bring equality to Kenya since he knows what it is like to be on the outsider as well as being poor. However, all things considered, it is hard to say that this nation is a nation for the hustlers or any kind of bottom-up economy. The economy is just too expensive to be anything but a rich man’s nation.