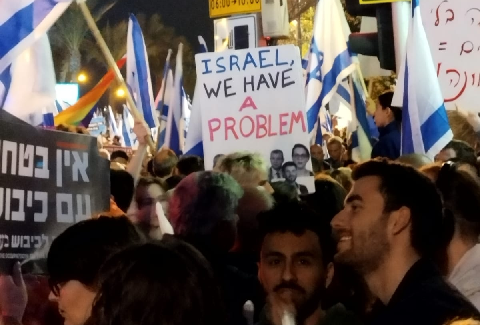 Today, Saturday 21 January, an estimated one hundred thousand Israelis marched through Tel Aviv in a mass protest. Banging drums and kitchenware, holding signs, waving the flag of Israel, and singing “Israel is a democracy”, Israelis came together to oppose the radical legal reform package that the new government of Prime Minister Benjamin Netanyahu is advancing that would limit the power of Israel’s Supreme Court over certain legislative decisions. The number of people grew from last week’s protest on the same issue. The increase is linked to this week’s ruling by the Supreme Court of Israel, which has disqualified Arye Deri from serving as a minister in the Israeli government.

The ruling on Wednesday invalidated the appointment of Deri to government minister by a majority of ten judges to one. Ten judges explained that due to Deri’s many criminal convictions and because, in his trial, Deri had declared before the convicting court that he would not return to public life, he was ineligible to hold public office and that Netanyahu’s decision was highly unreasonable. The minority opinion, written by Judge Yosef Elron, ruled that the decision on the question of Deri’s appointment as a minister should be transferred to the chairman of the Elections Committee, Judge Noam Solberg, so he might determine whether Deri’s actions were defamatory, and according to his qualification for office can be decided.  This decision has thrown the government into chaos. Now, Netanyahu must find a way to fire Deri while also giving something in return to the Shas party, which Deri is the leader of, to prevent them from leaving the government and by that, leaving it as a minority of less 61 sits, which means it will be defeated.

Many speeches were given this evening, one of them by the Israeli author David Grossman, calling the reform “one-sided and predatory, and behind it, we see a burning house. If the status of the rule of law is seriously damaged, all other important struggles will gradually crumble as well. I refuse to be an exile in my country.” He also said: “if we want Israel to continue to exist, it must not distance itself from the hope and vision that created it. You are the hope, you are the vision, you are the chance”. If the spirit of these words is any indication, it would seem that mass protests against a major change in the democratic system will continue every Saturday evening in Tel-Aviv and additional locations across Israel, with the number of protesters growing weekly.