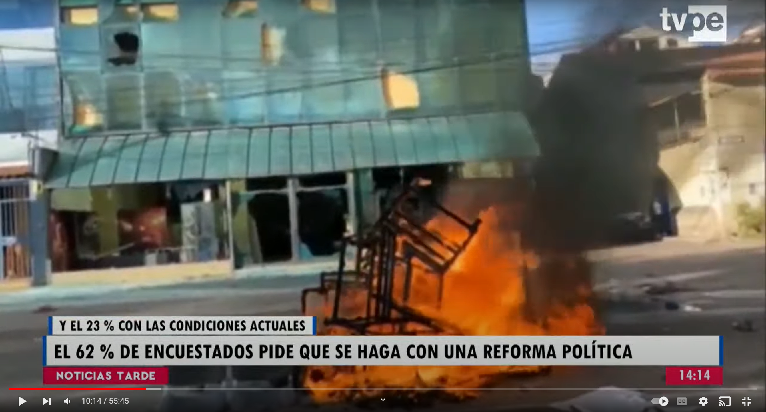 Anjana Meza is a JURIST Staff Correspondent in Lima, and a law student in the Facultad de Derecho, Pontificia Universidad Católica del Perú.

After Dina Boluarte was sworn in as president of Peru earlier this month, on December 10, various protests began in several regional departments of Peru, especially in Arequipa, Huancavelica and Ayacucho.

Protesters in these regions of the country objected to the swearing-in of the new president and demanded her resignation. They also demanded the expulsion of members of Congress and declared elections should be called as soon as possible.

But various people took advantage of the protests to commit violent acts. They caused damage to companies and premises of public entities. In the southern department of Arequipa, for example, they set fire to Gloria Milk, a factory dedicated to the production of dairy products. This factory was unguarded and open to the public, just as it always was. However, this situation was taken advantage of by protesters who, far from peacefully exercising their right to protest, took control of the Gloria facilities and proceeded to set fire to the place regardless of the presence of workers on the premises.

Likewise, they caused riots in the capital of Arequipa, which consequently caused several commercial premises to close their doors for fear of seeing their businesses damaged and transportation to stop. All flights at the Arequipa airport were canceled and the roads were blocked by the protesters, so that land trips could not be made either.

Also, some violent protesters set fire to the headquarters of the Prosecutor’s Office and the Judiciary in Arequipa. Fortunately, the workers made it out in time and were not injured.

This same pattern of attacks attack against the premises of state entities happened in other departments of the country such as the south-central jurisdictions of Huancavelica and Ayacucho, where several violent situations also occurred. In Ayacucho, vandals looted the headquarters of the Judiciary and then set it on fire, causing serious consequences for the justice system, since judicial files that only exist physically were burned. Likewise, they caused panic among the workers and public officials, who left the Judiciary building in terror to get to safety.

Apart from all violence caused by some (not all) protesters in these regions of the country, the police also are reported to have engaged in violent acts of repression, causing the deaths of several people, including children and minors.

Although the protests began in regions other than Lima, it did not take long for protests to begin to emerge in the capital of the country, mainly in central areas surrounding the Congress and the Government Palace. People came from different parts of Lima and also from different parts of Peru to demand the resignation of Dina Boluarte and the departure of all members of Congress.

However, in Lima there have also been violent acts. For example, vandals attacked public transportation stations, which caused some passengers to have to protect their safety and seek alternative transportation routes in the city.

This chaotic situation in Peru caused President Dina Boluarte to say, in a press conference, that the elections in the country would be brought forward with the aim of stopping the protests and acts of police repression. However, last Friday, December 16, Congress decided not to approve the bill that proposed early elections. This prompted the protests in the country to continue over the weekend. As of Saturday, 23 Peruvians had died during the protests.

Unfortunately, the political and social crisis in the country has not ended. President Dina Boluarte has asked Congress to reconsider its decision and to approve the early elections to finally put an end to all the chaos that has been happening in the country.