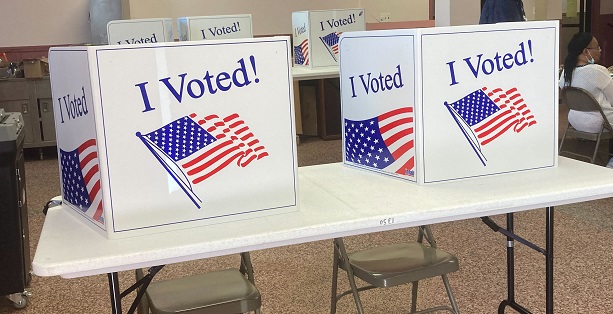 Justin Lindsay is a US National Correspondent for JURIST, and a 2L at the University of Pittsburgh School of Law. He served 10 years as an Officer in the United States Army.

Threats to election safety are rising to a crescendo in the United States. The US “midterms” (called that because they occur between presidential elections) will be held on Tuesday, November 8th, and their results will determine which parties control the lower and upper houses of Congress for the remaining two years of Joe Biden’s current presidency. Reliable odds makers have given the Democrats just a 15% chance of retaining control of the House of Representatives, and the Republicans a better than even chance they will gain full control of the Senate. Many hardcore conservative groups do not trust the election will be run fairly, however, and have begun to take action.

Dangerous and violent rhetoric erupted during the 2020 election, taking many law enforcement agencies and poll workers by surprise. That close election, and Donald Trump’s refusal to accept the results, prompted many to aggressively confront ordinary civil servants. Those confrontations and attempts to alter the results were so dramatic they were highlighted in the January 6th Committee hearings. In harrowing testimony, Georgia poll worker Wandrea Moss detailed grotesque harassment and threats she received from members of the Republican party.

For the 2022 elections, however, the national government is rather more prepared. In June 2022, the US Department of Homeland Security revised the national terror threat to recognize the increased risk of political violence through the election season. At the same time, the FBI began an education campaign, explaining to election officials across the nation options for funding increased physical security for elections and election officials.

The FBI has not been sitting idly by since. In early October, the Department of Justice arrested and indicted an Iowa man for making threats against elections officials in Arizona after telling them “we’re gonna hang you, we’re going to hang you”  (whether that was a general death threat, or a specific reference to a Republican voter’s campaign to hang Mike Pence, is unclear).

Unfortunately, the FBI and the DOJ cannot be everywhere. In Arizona in October, masked men, covered in body armor and taking photographs of voters, staked out a drop box where voters can cast ballots in advance of election day. An investigation by local officials revealed that they were members of “Clean Elections USA”, an arm of the election conspiracy group “True the Vote”. While one might find faceless goons in body armor hovering over the voting booth to be intimidating, a US District Court Judge disagreed and refused to issue an injunction preventing this activity. Only after a second group came forward with a witness specifically describing voter harassment did the judge agree to some restrictions. Some residents were not pleased by the delay, and took their frustration directly to the court.

This kind of intimidation is not an isolated incident or a small operation. “Clean Elections USA” has accrued more than 4,500 volunteers according to a reporter who gained access to their membership roster. They include volunteers in battleground states beyond Arizona, including more than 100 in Michigan and 264 in Pennsylvania as of October 20th.

It is clear that there is a coordinated effort at voter intimidation in the guise of election security. The United States provides numerous legal, non-adversarial ways for members of any political party to ensure the integrity of an election. A member of a political party can become an official “poll watcher” who monitors voting and counting. Someone willing to forgo their party affiliation for the day can become a “poll worker”, and actively do the counting and guide the voting process. States will even pay people to do this job! If these groups were interested in election integrity, they could pursue these well-known and (previously) widely-accepted methods of oversight. Instead, they choose intimidation, threats, and the specter of force.

General threats of violence from right-wing groups and individuals have risen dramatically since 2016. The FBI’s Strategic Intelligence Assessment in May of 2021 identified a shift from individualized, racially motivated attacks to right-wing bombmakers, targeted killings, and premeditated massacres. As 2022 has marched on, the outbursts have become harder to police, and more varied in their targeting. Last week in Tulsa, Oklahoma, a donut shop that had held a drag show was firebombed by a MAGA hat-wearinging attacker in the dead of night. If the violence is to be stopped, or at least mitigated, it will take some effort on the part of the Republican establishment to reign in its more radical members.

On November 3rd, the investigative reporting non-profit ProPublica announced that it had uncovered a series of intimidation attempts not aimed at voters, but at poll workers themselves. After the 2020 election, Texas Attorney General Ken Paxton (famously under investigation for securities fraud for the past five years), who is nominally in charge of ensuring elections are free and fair in his state, opened ten separate investigations into his own poll workers and their conduct on election day in 2020.

While conducting internal inquiries would be within the scope of Paxton’s duties as Attorney General, these were neither internal, nor were they inquiries. In fact, he referred his own poll worker for criminal charges because she refused to allow a political party’s observer to illegally enter and record ballots. Referring a poll worker for criminal charges for quite literally following the very rules Mr. Paxton wrote is a bold move. It was, in fact, so bold that a Texas Grand Jury, hand-picked by Mr. Paxton to be overwhelmingly conservative, refused to indict the poll worker. To give context, Grand Juries are famous for their broad ability to indict.

Again, we are confronted by the absurdity of the claim. Attorney General Paxton indicts his own poll worker for following his own rules under such a laughable premise that a hand-picked jury could not in good conscience refer it for any further investigation. Were this a matter of election integrity, it would not have involved criminal charges for protecting the sanctity of the ballot box. Texas Governor Gregg Abbott has already passed a law that would allow the observer’s conduct to continue unobstructed. It’s clear the purpose of Paxton’s action was to use the mechanisms of law and the power of office to dissuade poll workers from actually performing the duties they swore an oath to do. Look no further than his deployment of a “task force” to ensure the vote comes out the right way in Houston.

American politics is famously fraught, with observers going as far back as Alexis de Tocqueville noting its peculiar power to spur debates from country farmer to farmer, as much as from constitutional framer to framer. Election day violence was a staple in some parts of the United States in the nineteenth and early twentieth centuries. But we like to think those times have long since passed, and that we have advanced beyond setting up covered and concealed positions outside a voting booth to pour fire on our political opponents should they try to exercise their rights. The past six years, however, have disabused us of this notion.

As election day draws near and a Republican-controlled Congress appears likely, the question of election legitimacy will once again arise. If the Republicans regain control of the legislative branch through a legitimate vote, who would argue? But if they regain it and do so while their agents (both legally and extra-legally) influence the process, what then? Should the vote be accepted? Should Biden’s DOJ investigate and make arrests and gather evidence that could alter the outcomes? Will the Republican Supreme Court preemptively rule that this is all poppycock and declare the winner as they did in Election 2000? None of these questions have good answers because no one would accept an answer that goes against them. The American government may be ready to conduct this election, but the American people are not prepared for its aftermath.