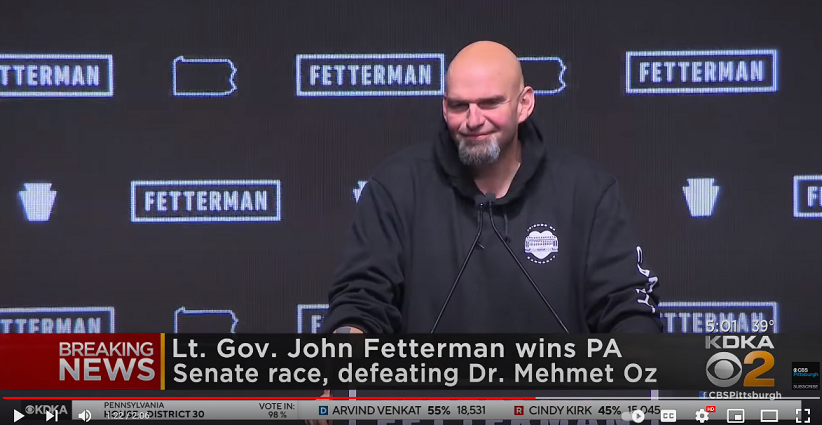 JURIST law student staffers from the University of Pittsburgh School of Law are filing dispatches on various aspects of the November 2022 midterm elections in Pennsylvania. Here, Pitt Law 2L David DeNotaris reports on the race between Mehmet Oz and John Fetterman for one of the two Pennsylvania seats in the closely-divided US Senate.

While overall party control of the United States Senate and House is still uncertain, what is certain now is who will be Pennsylvania’s next US senator. The election is over, the voters decided, and Democrat John Fetterman is going to Washington.

Pennsylvania’s elections were looking contentious before anybody even started voting, with issues ranging from redistricting to the dating of mail-in ballots; several lawsuits were filed against county boards of elections in the days leading up to this election. Fetterman himself joined a suit against 67 county boards of elections over mail in ballots after the PA Supreme Court ordered counties not to count incorrectly dated mail-in ballots.

Pennsylvania, unlike other states, did not have abortion measures on the ballot, but abortion was such an important issue to voters here that many went as far as to say that ‘bodies are on the ballot‘. While voter demographics aren’t out yet, it is certain that Pennsylvania women were responsible for Democrat success. In the only debate between the Pennsylvania candidates for US Senate, Oz said “I want women, doctors, local political leaders, letting the democracy that’s always allowed our nation to thrive to put the best ideas forward, so states can decide for themselves” regarding the abortion decision. In the same debate, Fetterman endorsed codifying Roe v. Wade. Much of the election advertising surrounding midterm elections in Pennsylvania emphasized the importance of the abortion issue, with Josh Shapiro’s win over Doug Mastriano perhaps being the greatest testament to the importance of abortion to Pennsylvania’s voters.

In addition to abortion, an important issue for voters, or at least party advertisers, in this election was fitness for office. John Fetterman, who suffered a stroke in May, had been criticized by Mehmet Oz for being unfit for office. Despite this, Fetterman is likely more fit for office than Tony DeLuca, who died in October and was reelected in Pennsylvania’s 32d district on Wednesday.

It’s difficult to speculate on how the Pennsylvania elections will affect the United States as a whole, because not every national election has been decided. Beyond the Pennsylvania election, a so-called ‘red wave’ was promoted by pundits as a midterm possibility, but it failed to materialize. The Pennsylvania Senate contest was a hard-fought battle, and if election importance can be measured by political spending, Pennsylvania and Georgia have the most important US Senate seats in the country. Some voters are still wondering if it was a good idea to put forward a TV doctor and a former-professional football player, both with no political experience, as candidates for two of the most important Senate seats in the United States. It seems it wasn’t a good idea. As they say, hindsight is 20-20.