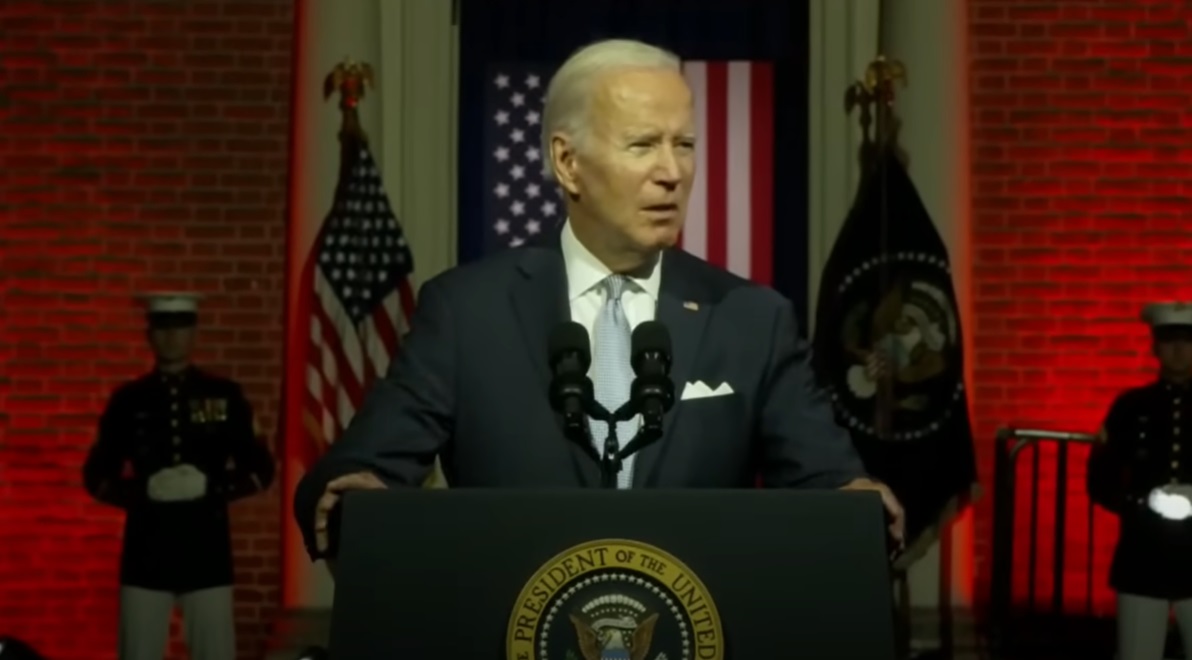 Justin Lindsay is a US national staff correspondent for JURIST, and a 2L at the University of Pittsburgh School of Law.

A gravelly-voiced President Biden called Americans to action on Thursday evening, launching a long-awaited counterattack against anti-democratic elements. Speaking from the steps of Independence Hall in Philadelphia where the Declaration of Independence was signed and the US Constitution was adopted over 200 years ago, the President publicly derided former President Donald Trump and his followers (termed throughout the speech “MAGA Republicans”) as extremists threatening the foundations of the republic.

Biden insisted that MAGA Republicans were a minority within the Republican Party as a whole, even as they dominate the party for the moment. The President’s reason for his careful differentiation became clear as he laid out the case for uniting against radical elements. Pointing to the violence on January 6th and continuing threats in the United States to law enforcement, election officials and judges, President Biden echoed the preamble of the Constitution while asking Americans to reject violence as a tool for political change, insisting that “American democracy only works if we choose to respect the rule of law.”

The audience for the President’s speech was friendly, approving his calls for peace and his review of his legislative accomplishments of the past several months, but the biggest applause was saved until nearly the end. A single heckler with a bullhorn had been attempting to disrupt the speech for several minutes when the President, after conceding American democracy was imperfect, gestured towards the protestor and said he was “entitled to be outrageous. This is a democracy.” The resulting cheers from the crowd drowned out the President for the first time, making clear his political base was behind him. Following a final plea that Americans “Vote. Vote. Vote,” the President broke slightly with tradition: instead of the customary “God Bless the United States”, he added the final, standalone exhortation “Democracy!” before stepping down.

The President’s explicit identification of “MAGA Republicans” as anti-democratic, violent extremists puts them firmly in the crosshairs of the nation’s security apparatus. Likely inspired by January 6th, the Administration released a plan to counter domestic terrorism on Inauguration Day. In May 2021, the FBI’s Strategic Intelligence Assessment already showed a shift from individualized, racially motivated attacks to right-wing bombmakers, targeted killings, and premeditated massacres.

Right-wing elements have rejected their labeling, claiming they are just “offensively patriotic”.  A fact sheet purportedly used by the FBI identifies many common symbols and references used by extremists, connecting the symbols with confirmed attacks. Supporters of right-wing movements believe that their use of these symbols does not identify them as terrorists, presumably in the same way one could wear jackboots and swastikas without actually being Gestapo.

Questionable objections notwithstanding, it appears the Justice Department is taking a harder line on possible domestic terrorists than in years past, especially within the executive branch. In July of 2022 the FBI arrested a former Marine on firearms offensives, but further alleged that he led a Nazi-inspired group with plans to attack a synagogue. And just this week the Department of Justice pressed charges against a former soldier for lying on his security clearance while also alleging that he joined the military specifically to learn to kill minorities. The Biden Administration’s attempts to “clean house” indicate the threat posed by far-right extremists is not likely to dissipate soon.

History would agree. In the wake of the American Civil War former Confederates saw much of their political power disappear as formerly enslaved men were allowed to vote. Unable to accept the results of free and fair elections, these individuals turned to violence. Several disparate groups merged to form the Ku Klux Klan (KKK)  and began a campaign of terror across the southern United States. Such was the violence inflicted on Americans that President Ulysses S. Grant created the US Department of Justice to deal with them.

Ultimately President Grant would need three Acts of Congress and the 7th Calvary to crush them, but even with such overwhelming force it was too late to stop “Jim Crow” from taking root. Indeed, despite the best efforts of the Grant administration, the KKK would rise again in the 1920s, and it persists across the nation a century later. The KKK was successful; its campaign of terror nullified the political power of minorities and enshrined grotesque racial discrimination in the South up to and beyond the Civil Rights Acts of the 1960s.

There are echoes of President Grant in Biden. When Grant warned of the threat of right-wing domestic terrorism, he asked the liberty-loving people of the south, “to suppress all such [lawlessness] by their own voluntary efforts, and to maintain the rights of all citizens of the United States and to secure to all such citizens the equal protection of the laws.”

As Grant invoked the words of the XIVth Amendment, so too did Biden invoke the Declaration of Independence when he reminded “mainstream Republicans”  that the nation was founded on the premise that “we’re all created equal” and to reject Trumpism. And both men retooled the machinery of the executive branch to confront radical right-wing terror. But we can see some differences as well.

President Grant unavoidably spoke to the people of the South as their conqueror, but President Biden is able to hold himself out to Republicans as a fellow American. The location of the speech in Philadelphia and the references to a shared history clearly appeal to something deeper than party; it is an attempt to reach across the aisle and find common ground in the words that founded the nation. The fact that Pennsylvania is likely holding the most high-stakes US midterm election in November 2022, that the city of Philadelphia already appears to be the king-maker in this, and that even the city’s sports mascot has become a symbol of anti-Trumpism surely were also factors in making the speech in Philadelphia.

Times change, but people do not. History rhymes, as it were. In the wake of war, disease, economic distress and social upheaval Presidents Grant and Biden both found themselves confronting white supremacist violence bent on erasing the gains of a past generation. The differences in their approaches are not yet obvious, but differences in their personal positions are. Perhaps that will be enough to change the country’s tune.