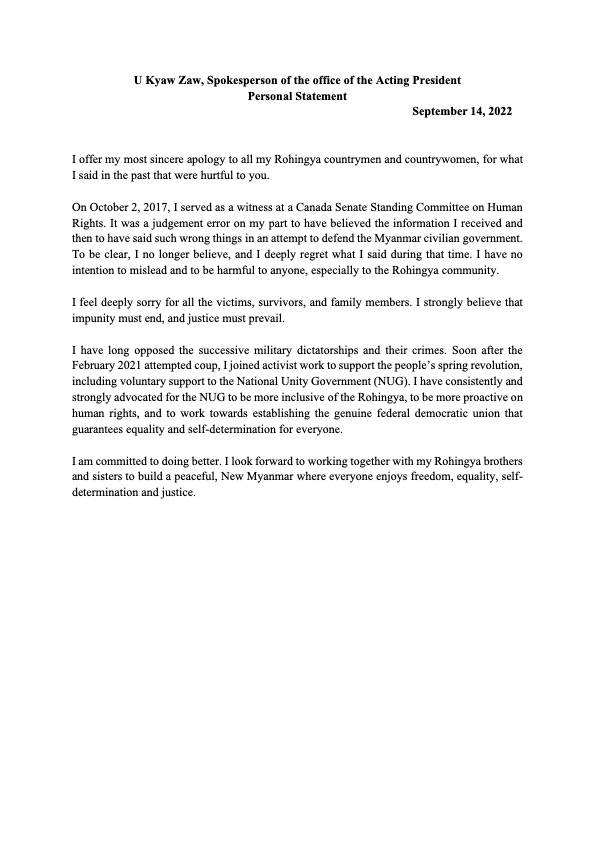 Myanmar law students are reporting for JURIST on challenges to the rule of law in their country under the military junta that deposed the civilian government of Aung San Suu Kyi in February 2021. Here, one of our correspondents comments on an apology by a senior NUG spokesman for comments he made about the Rohingya while he was a representative of the Myanmar civilian government in 2017. The text has only been lightly edited to respect the author’s voice.

Last Wednesday, 14 September, 2022, U Kyaw Zaw, the spokesperson for the office of Duwa Lashi La, Acting President of the Myanmar NUG [the National Unity Government shadow administration formed in response to the Myanmar military junta that seized power in February 2021] published a personal statement (first released in English and then in Burmese) apologizing to “my Rohingya countrymen and countrywomen” for the misleading and harmful words he said he had used when he served as a witness at a Canada Senate Standing Committee on Human Rights on October 2, 2017. He admitted that regardless of his intention, his attempt to protect the civil government of the time by downplaying and denying the Rohingya genocide was morally wrongful and that he blindly relied on wrong facts. He also expressed his commitment, as a spokesperson currently serving the National Unity Government, to encourage the NUG to be more proactive on human rights and to establish a genuine ‘federal democratic union.’

This is not the first time an NUG official has released a personal statement expressing a change in their stance on the Rohingya. The Minister for Women, Youth and Children’s Affairs Susana Hla Hla Soe has also publicly apologized for her ignorance when serving as a parliament member for the past five years before the coup.

Since its formation, the NUG has promised federal democracy as a people’s government. NUG’s best attempts and intentions are required as former parliament members of the civil government that denied Rohingya’s rights are also in the NUG. They cannot move on without recognition and proper apology.

Even though the NUG’s goal is clearly to become “a federal democratic union”, it is important to ask ‘how NUG is going to get there?’ When the criteria of a federal democratic nation where all human rights must be guaranteed, “Where does NUG stand in the Rohingya issue?” is an inevitable question. To revisit the root of this question, the “Clearance Operations” led by the military branch of the Myanmar civilian government in 2017 resulted in grave crimes against humanity, a genocide. This was why Myanmar was brought to the International Court of Justice in 2019.

Myanmar’s legal team, led by the State Counsellor Daw Aung San Suu Kyi, submitted preliminary objections to the court’s jurisdiction. The “Rohingya” were then called “Bengali” and were deprived of the right to self-determination and the right to citizenship. Myanmar’s civil government that denied its liability at that time. The NUG and its representatives have since been called to account by the international community. The NUG’s stance on the Rohingya issue can make or break its diplomatic effort to garner international recognition and support for itself. And it is this recognition, or its lack, that will decide whether Myanmar’s journey towards federal democracy will be successful!

As a law student, I think the civil government was responsible for the genocide of Rohingya, as well as the current military junta. Before the coup and the light shed upon this matter, even the majority of Myanmar people and the civil government tried to escape from the blame and claim that the military were the sole offenders who actually and directly used illegitimate force. However, it is as clear as day that both action and omission can amount to a grave crime like this. The ‘intentional’ omission and failure of the civil government to prevent genocide is the main element of its fault. Also, government manipulation of the media to spread misinformation and to bury its own faults is a big part of the fault which led the Myanmar public to turn a blind eye to the Rohingya minority.

I still recall the infamous “We stand with Daw Aung San Suu Kyi” rally held before the state counsellor’s journey to the venue of ICJ hearing. The majority of people in that rally mistakenly believed that the ICJ was accusing the people of the genocide charge. Not to mention the civil government’s attempt to silent the media, the public was deprived of the right to the truth. The Myanmar public really thought “Rohingya” were just homeless and stateless “Bengali.” I wasn’t in that crowd on that day three years ago, but that was because of a mere bad feeling that I could not identify exactly at that time. I admit it was not an adequate factual and logical reasoning a citizen should uphold and not a legal reasoning a law student should be able to make. Therefore, I believe I owe an apology to the Rohingya community, just like the whole Myanmar public does. The public who were deprived of adequate civic education for decades were easily led to a wrong standing point which cannot be fixed by just a simple apology. Now is the chance for the NUG and the public to make up for this.

As a Myanmar citizen, I welcome the NUG as a political body representing Myanmar and its officials. They should clearly express where they stand. Most importantly, I call on them to actually enforce their words in their actions and in their government mechanism. I hope to see Rohingya representation in the body of NUG because every part of the public should have the right to be heard and to have representations of their voice in the government. The promise of a federal democratic union should not be just a promise on paper or just a political trick. These would strip off all moral values. For decades, Myanmar has faced enough ‘cruel dictators’ and ‘twisted politicians.’ What Myanmar truly needs right now are true “political and civic leaders” to steer the vehicle called “the NUG” to the destination called “Federal Democracy.”