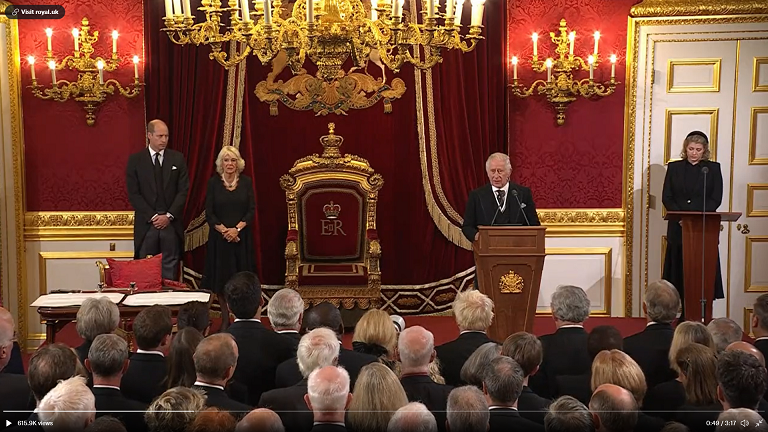 Charles III was formally proclaimed Britain’s new king in London Saturday in a traditional royal ceremony televised this year for the first time.

At 10 am BST, the Accession Council, comprised of senior UK politicians who are current or former members of either the House of Commons or the House of Lords, met for the proclamation in an anteroom at St James’ Palace before moving into the Throne Room to hear a personal declaration in which King Charles, speaking from a lectern bearing the old seal of “ER” (“Elizabeth Regina”), formally announced the death of his mother the Queen and went on to say:

I am deeply aware of this great inheritance and of the duties and heavy responsibilities of sovereignty which have now passed to me. In taking up these responsibilities, I shall strive to follow the inspiring example I have been set in upholding constitutional government and to seek the peace, harmony and prosperity of the peoples of these islands and of the Commonwealth realms and territories throughout the world.

His Majesty The King gives a personal declaration at today’s Accession Council, where he was formally proclaimed King Charles III.

King Charles then made a formal vow to adhere to the terms of the 18th-century political and religious settlement with Scotland.

The King takes an oath to maintain and preserve the Church of Scotland.

He then signs the declaration – Charles R pic.twitter.com/7GrD7cI22S

He then sat down to sign the documents that officially declared him to be King. The Prince of Wales and Queen Consort, UK Prime Minister Liz Truss and Penny Mordaunt, Lord President of the Council, then signed the documents as witnesses.