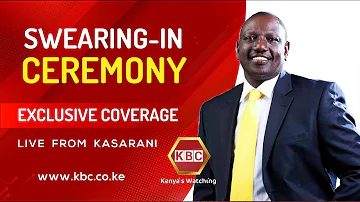 A war is currently going on Kenya social media. It’s a war between those who are in support of parastatals [state-owned enterprises] taking the forefront in Kenya’s economy and those who believe that both parastatals and private owned establishments should work together to further boost the economy. The conflict began soon after President-elect William Ruto declared that the Kenya Broadcasting Corporation (KBC) would be the only Kenyan media station that would be allowed to cover his inauguration ceremony that will be held on 13th September 2022. Other media stations such as Citizen TV, Nation Media and Kenya Television Network (KTN) will have to buy the signal from KBC if they want to air the inauguration ceremony.

Many UDA supporters (i.e. William Ruto’s supporters) support the president-elect’s decision. Many of his supporters are wondering why people are angry that KBC is being given special priority, and yet the channel is our national broadcasting station. They argue that what president-elect Ruto is doing is fair since the channel is funded by taxpayers. Additionally, they ask: is it wrong for our government to want to elevate KBC the same way the British government elevated the BBC to the international stage? Other UDA supporters were rejoicing, since they claim this was a revenge tactic by William Ruto against media stations such as Citizen TV that many said openly supported Raila Odinga.

Other Kenyan citizens argue that’s Ruto’s declaration was an outright infringement of the freedom of media right enshrined in article 34 of the Constitution of Kenya. Many non-UDA supporters feel that media houses should be allowed to broadcast independently without having to buy information from a government media house. They further say that such a declaration is a recipe for dictatorship. Whether this will be the new trend or not for all government events, only time will tell.

After the KBC declaration many UDA supporters started demanding the closure of entities owned by private individuals or by the Kenyatta family. The entities include corporations such as Brookside, Royal Media Services and even Equity Bank. Many UDA supporters claim that these corporations have led to the destructions of parastatals such as Kenya Co-operative Creameries (KCC) and KBC that used to perform the same functions as Brookside and Royal Media Services respectively. They claim that shutting down these corporations will promote the will of the people. But those who are against the shutting down of these corporations point out that their closure will lead to many people losing their jobs, including UDA supporters who work in these private corporations. The situation is quite tricky at the moment and president-elect Ruto will need to find a balance, since regardless of whether these entities are government or privately owned, they all have ordinary citizens working for them. These citizens are innocent bystanders and do not deserve to be left unemployed, especially in these harsh economy we are currently living in.

On that very same day that William Ruto made the KBC declaration, Siaya County Governor James Orengo as well as one of the senior legal counsel for the Azimio party issued a press statement in regards to the recent presidential petition verdict. He stated that the court ruling brought shame to the Judiciary. Orengo further stated that the ruling had a political agenda. He especially condemned the choice of words that Chief Justice, Martha Koome used when delivering the final verdict. “Judges speak in words that are measured so that even the loser in a court of law feels like justice has been done,” said Orengo. “Not even a baraza [council] presided over by a Chief would use the kind of language that was used at the Supreme Court. Shame to you judges!” He finished by stating that the fight for justice is still on and that he and his fellow compatriots would not rest until justice is done. Orengo has received a lot of backlash from UDA supporters who have stated that Orengo should accept the ruling and move on, although Azimio supporters have shown their support for him.

Meanwhile Martha Karua, the running mate for Raila Odinga (the Azimio Party leader) has said that she is considering taking the election petition to be heard in the East African Court of Justice. She is not satisfied with the how Supreme Court of Kenya handled the matter and is finding it difficult to find closure in regards to the matter. But this has never been done before. Therefore, most Kenyans are waiting to see how the situation will unfold.

The Supreme Court judges also released an unusual press statement on 12th September 2022 alleging that the current wave of social media attacks on the judges are sponsored. The statement was released after rumors of the resignations of both Justice Philomena Mwilu and Smokin Wanjala spread all over the internet. The judges were quick to declare the rumours as false and they said that the judges are still united. In their statement the judges disclosed that have been receiving a lot of backlash online and that they believe the negative commentary against them is being orchestrated. “The persons sponsoring and executing the attacks on social media to disparage the court are advised to desist forthwith,” it said. The statement has received a lot of mixed reactions. There are those defending the judiciary, but majority of the people online have turned the judiciary into an object of ridicule. Many are wondering why the judges are shocked that they are receiving negative comments online due to the presidential petition judgement.

Statement on Sponsored Sustained Attack on the Supreme Court. pic.twitter.com/wUHDsZbGyK

William Ruto will be sworn in as president tomorrow. He has promised to bring an end to all the corrupt cartels once he is officially in power. He has also promised to reduce the prices of fertilizers as well as maize flour in order to help reduce the high cost of living in Kenya. Whether the man will stick to his promises or not, we will know in due time. Hopefully he will.