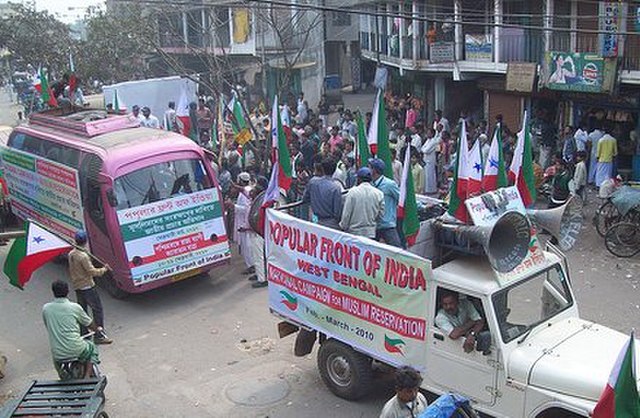 India’s Ministry of Home Affairs (MHA) Wednesday banned the organisation Popular Front of India (PFI) for undertaking “unlawful activities” which are “prejudicial to the integrity, sovereignty and security of the country” and for its alleged connection to the organisations. Under Section 3 of the Unlawful Activities (Prevention) Act, 1967 (UAPA), PFI is banned for five years.

The MHA also banned PFI’s associated organisations, including Rehab India Foundation (RIF), Campus Front of India (CFI), All India Imams Council (AIIC), National Confederation of Human Rights Organization (NCHRO), National Women’s Front, Junior Front and Empower India Foundation. The MHA accused these organisations of offences such as terrorism and its financing, targeted gruesome killings, disregarding the constitution of India and disturbing public order. PFI members were also associated with the beheading of a Hindu man in the western state of Rajasthan in June. In a statement, MHA said:

The PFI and its associates or affiliates or fronts operate openly as socio-economic, educational and political organization but, they have been pursuing a secret agenda to radicalize a particular section of the society working towards undermining the concept of democracy and show sheer disrespect towards the constitutional authority and constitutional set up of the country.

Soon after the MHA’s press release, Twitter suspended PFI’s official account in India “in response to a legal demand.” So, far the MHA has banned 42 organisations under the UAPA. Last week, the National Investigation Agency (NIA) and the Enforcement Directorate (ED) conducted simultaneous searches at multiple locations in and arrested or detained 240 individuals associated with PFI and its affiliates.