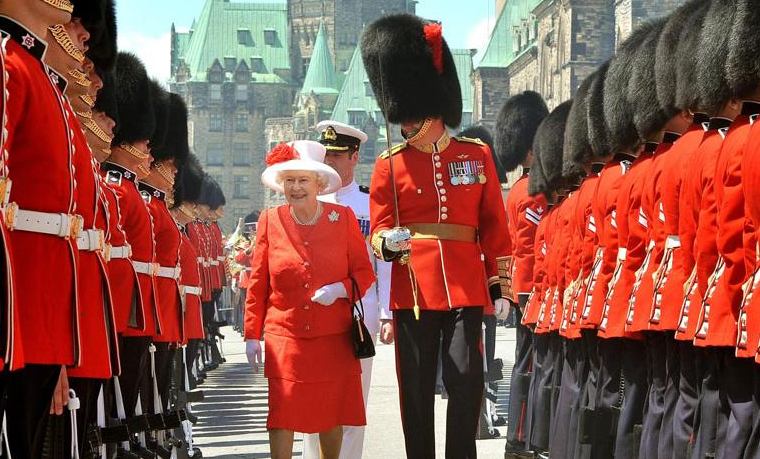 On September 8, Queen Elizabeth II died at the age of 96, concluding the reign of the longest-serving British monarch. For a huge portion of people alive today, she was also the most recognizable symbol of the British monarchy, the only British sovereign they ever knew.

The five-mile line of mourners seeking to pay respects their respects to the Queen at Westminster Hall has been growing at such a fast pace that it has had to be paused by the UK Government. This weekend, new mourners were prevented from joining for approximately 6 hours, and the UK Department for Digital, Culture, Media and Sport has been making announcements via Twitter regarding wait times to see the Queen’s coffin. As of their September 17 evening update, the estimated waiting time is at least 14 hours.

As a nation with some remaining ties to the British crown, Canada was expected to join in the mourning, and indeed, Prime Minister Justin Trudeau declared last week that National Day of Mourning will be held on Monday September 19 to mark the Queen’s passing. Currently, Trudeau is in the UK with a few former Canadian Prime Ministers, both to pay his respects to the Queen and to meet with King Charles III.

Before leaving, he also stood in the House of Commons, where he and other Canadian parliamentarians made speeches about the Queen. “[The Queen] had an unflinching, enduring commitment to service, to building a better world and a better future,” Trudeau stated. “All of us here know that service requires sacrifices. The Queen did so with grace. Her selflessness and dedication is a model.”

But these sentiments are not echoed throughout Canada. Indeed, many Canadians have been reconsidering this country’s continuing links to the British monarchy in light of Queen Elizabeth’s death.

From early colonization, to the theft of unceded Indigenous land, to the more recent residential schools disaster, the British Crown oversaw it all. Indeed, it was not until 1982 that Canada officially severed (most of) its final constitutional ties to the UK by having Queen Elizabeth sign off on the Constitution Act, 1982. “That monarchy and that government has sanctioned the genocide of my people, they sanctioned children being raped and murdered… to me and many of my people who have suffered like I have, that’s what [the Queen] meant,” a residential school survivor named Doreen Manuel was quoted as saying in a recent Global News article.

Though residential schools were established before Queen Elizabeth’s rule, she was on the throne for over 40 years while the abuse continued in those institutions, and she maintained close relationships with the Canadian Prime Ministers and Parliamentarians who created and upheld the policies that allowed this suffering to continue for so long. For many Indigenous people in Canada, the Queen was (and the British monarchy as a whole, remains) a symbol of ignored treaties and violent assimilation.

Opinions on abolishing the monarchy in Canada are mixed, however, even among Indigenous people. While many are in favour of cutting all ties to the institution in whose name violent settlers committed atrocities across Canada, one recent Reuters article carries remarks from a few Indigenous Canadians who feel as though that it is less important for Canada to fully divest from the monarchy than it is to hold the British crown accountable within the established structure. They refer to King Charles facilitating the return of Indigenous artifacts to Canada and formally renouncing the Doctrine of Discovery as potential ways to aid reconciliation. The Doctrine of Discovery refers to a principle which deemed any land unoccupied by Christians to be vacant and thus discoverable in the name of a sovereign. The British crown subscribed to this doctrine and used it to justify colonization and assimilation when it “discovered” the land now known as Canada.

Canada is not the only former British colony where some people have very mixed feelings about the Queen’s passing. Indeed, all over social media—most notably on Twitter and TikTok—individuals of Nigerian, Kenyan, Irish, Indian, and various other backgrounds could be seen discussing the Queen’s death and educating the public on what the British empire did towards their respective people and countries.

One such atrocity was the Nigerian-Biafran War of 1967-1970, for which Queen Elizabeth was on the throne. She was criticized for this in a recent set of viral tweets by Nigerian professor Dr. Uju Anya. One of these tweets was removed by Twitter (as it wished “excruciating pain” on the Queen upon her death), but the remaining tweet states: “If anyone expects me to express anything but disdain for the monarch who supervised a government that sponsored the genocide that massacred and displaced half my family and the consequences of which those alive today are still trying to overcome, you can keep wishing upon a star.” Dr. Anya received significant backlash, with many calling her callous and insensitive.

By the time of the Biafran conflict Queen Elizabeth had been sitting on the throne for 15 years. Throughout the war, the UK provided significant funding to the Nigerian state and enabled the mass killing of members of the Igbo ethnic group, to which Dr. Anya belongs. She has discussed how the tragedy has affected her family, and others have backed her up by pointing out that Queen Elizabeth herself is the monarch to be blamed for the suppression of independence movements in various other former British colonies, such as Kenya and Ireland.

In response to Dr. Anya’s tweets, some have insisted that Queen Elizabeth is not to be blamed for the actions of a government for whom she was little but a figurehead, nor for events that occurred before she took the throne.

But what these individuals fail to understand is that even as a figurehead, Queen Elizabeth II was yet another British monarch who did little to nothing to address the generational traumas her family inflicted through violent colonization, and who continued to sit idly on a mountain of wealth accrued on the backs of British colonial subjects. Her unwillingness to apologize for the violence committed in hers and her family’s names, let alone make meaningful attempts to compensate the nations her ancestors destroyed, makes her, in my opinion, a fully deserving target of the anger of individuals who suffered under and continue to suffer from the consequences of her and her family’s rule.

In my view, one can acknowledge and empathize with the fact that Queen Elizabeth’s death, like any person’s, will cause grief to her loved ones, who will miss her as a parent, grandparent, and friend. However, censuring the expression of millions of people who knew only suffering and death at the hands of the British crown in the name of a distant affection many had for this particular monarch is not acceptable.

At any rate, these difficult conversations are far from over. In Canada, the commemorative ceremony for Queen Elizabeth is set to take place on Monday at an Ottawa Anglican church, along with a 96-gun salute and a flypast of Royal Canadian Air Force CF‑18 airplanes, which will mark the end of the official mourning period here. However, procedural and ceremonial changes to account for the new monarch (such as adjusting certain provincial courts’ names to the Courts of King’s Bench and altering the Royal Anthem to “God Save the King”) are still underway and will likely take some time to complete in full.