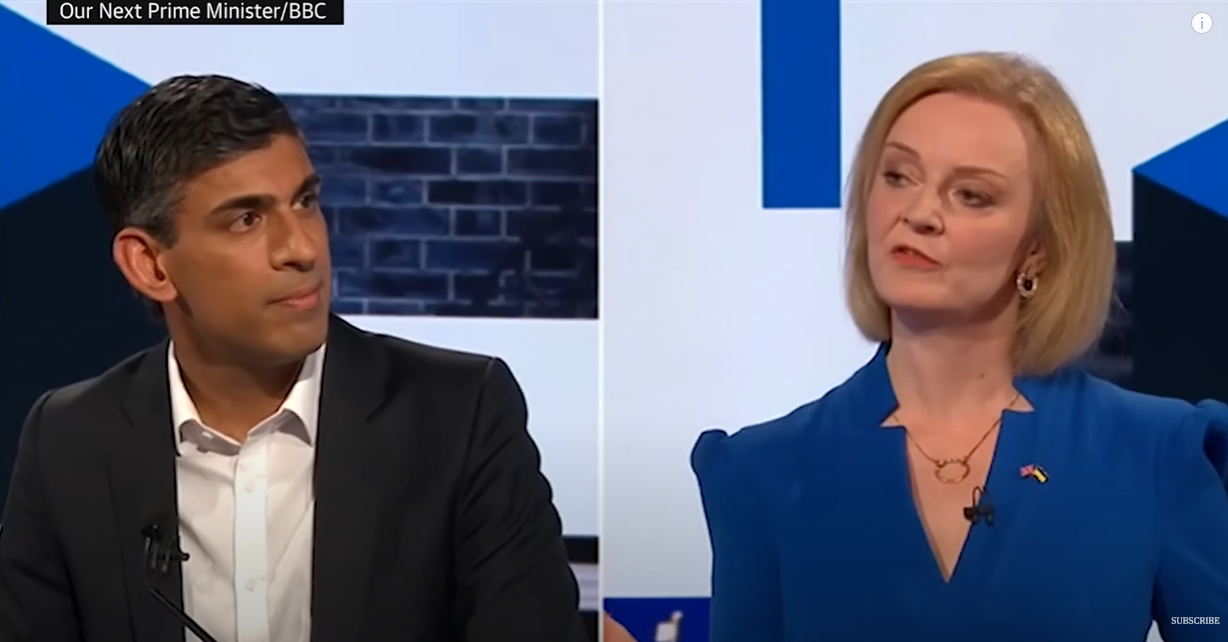 The contenders for the leadership of the UK Conservative (“Tory”) Party are now down to two. MPs have selected Liz Truss and Rishi Sunak from the initial list of eight candidates, despite polls previously suggesting that neither the Foreign Secretary nor the ex-Chancellor is the favourite of party members. In fact, Kemi Badenoch and Penny Mordant (knocked out in the last few weeks) had an overwhelming lead over both Truss and Sunak with the grassroots of the Conservative Party. It has been suggested that Team Sunak fancy their chances of beating Truss rather than the others.

In Monday night’s TV debate, Rishi Sunak, 24 points behind Truss in a late poll of conservative members, went on the attack. He didn’t give the Foreign Secretary a chance to speak, interrupting her 22 times, coming across as something of a smart aleck, and making Truss look statesman-like by comparison.

But let’s compare where the candidates stand on key policy issues.

Liz Truss has been said to have “left Sunak behind on policy”. She is promising to reverse his increase in national insurance and temporarily lift the so-called “green levees” on the cost of fuel. Rishi Sunak has meanwhile taken a “real” approach to tax cuts to relieve the cost of living crisis, saying he would not mandate “comforting fairy tales”.

On Wednesday and Sunak suddenly announced he would cut tax on energy bills, but as of this week, the energy price cap is predicted to go up to a horrifying £3420 in October and Rishi’s VAT cut equals about £160 of that. With five more weeks to go it seems Liz Truss has already won the race with her vision, even though there’s still not a huge amount of enthusiasm for either her or Sunak.

On taxes the former chancellor has promised the biggest tax cut in 30 years if he becomes prime minister, vowing to slash the basic rate from 20 percent to 16 percent within seven years. Ms Truss is drawing up Thatcherite plans to give No 10 more control over the economy.  The Foreign Secretary has announced £30 billion worth of tax cuts and would start to implement them “from day one”. She would cancel the planned six percent rise in corporation tax and reverse the National Insurance hike that came into force in April. She would also lift green levies on energy bills for two years. She has also said she would review inheritance tax as part of a general review of Britain’s tax system.

On borrowing, Mr Sunak has repeatedly said that the nation must balance its books. He has warned that “borrowing your way out of inflation isn’t a plan” and has challenged Ms Truss on her promise to borrow more to fund her tax cuts. He says: “That is the country’s credit card and it’s our children and grandchildren, everyone here’s kids will pick up the tab for that. There’s nothing conservative about it.” Whilst Miss Truss has said that she plans to pay for tax cuts by putting the Covid debt on a “longer-term footing”, akin to the nation’s war debt from the 1940s. That would potentially involve refinancing the £311 billion borrowed during the pandemic so that it was paid back over a much more drawn-out period.

On “Net Zero” climate policy Sunak has committed to keeping the target of making Britain carbon neutral by 2050. Truss backs the target overall but has said “we need to reach net zero in a way that doesn’t harm businesses or consumers”. She is “very supportive of using gas as a transition fuel” and has suggested she would end the ban on fracking so it could go ahead in areas where there’s local consent. To achieve his aims on Net Zero Sunak says he would oversee a massive expansion in offshore wind farms, but he would maintain the ban on putting up any new turbines on land. He wants to make the UK energy self-sufficient by 2045.

Then onto Education and the NHS (this video may explain things!). The leadership hopefuls have backed down on their original plans, with Mr Sunak originally appearing to say he wanted to bring grammar schools back in England. His team later confirmed he only meant expanding existing selective schools. Ms Truss has pledged to give all students who receive three A*s at A-level equivalent to 12th-year high school “advanced placement” level in the US, with an A-Star equal to an A+) an automatic Oxbridge interview. She said that Oxford and Cambridge should give all top students a chance for a place, as she warned some teachers discourage applications because the universities are “full of toffs”. She also suggested that supported delaying university admissions until after students have received their exam results taking on a 2019 Labour Party motion, abandoning the system of applications based on predicted grades. After a pandemic in which both Education and the NHS were put at massive strain with shifts seen across both industries, Mr Sunak would introduce a £10 fine for missed GP and hospital appointments as part of a “transformative” shake-up of the health system. He said that patients would be given “the benefit of the doubt” the first time they miss an appointment, but that subsequent absences would incur charges. The system would be “temporary” as the NHS tries to clear the Covid-19 backlog of more than six million patients waiting for planned care. Liz Truss has welcomed the backing of former health secretary Sajid Javid just hours after criticising the “appalling” length of time people are having to wait for ambulances. Yet the leadership hopefuls can finally agree on something with Truss concuring with her rival on the urgent need to deal with care backlogs, promising to install a “strong” health secretary to solve the issue. She has also said she is “completely committed” to current Government promises for NHS spending, despite her plans for tax cuts.

Finally, onto the matter of Brexit. The Foreign Secretary vociferously supported Remain during the 2016 referendum but has since transformed herself into one of the most steadfast Brexiteers in the Government. She has driven forward plans to override the Northern Ireland Protocol and has said she now regrets voting to stay in the European Union. When challenged by Mr Sunak during a TV debate over why she voted Remain in 2016, she said: “Maybe I’ve learnt from that.” Mr Sunak voted Leave and has said taking back control of law-making will give Britain a competitive economic edge. He has pledged to scrap or reform all remaining EU rules on the UK’s statute books by the next election and wants to overhaul Brussels red tape clogging up the City of London.

Tory members will vote for their next leader in September, with the winner announced on 5 September. That person is expected to enter No 10 as Prime Minister the following day. They will remain in the top job until the next general election, which is currently set for December 2024, unless they decide to call one early.