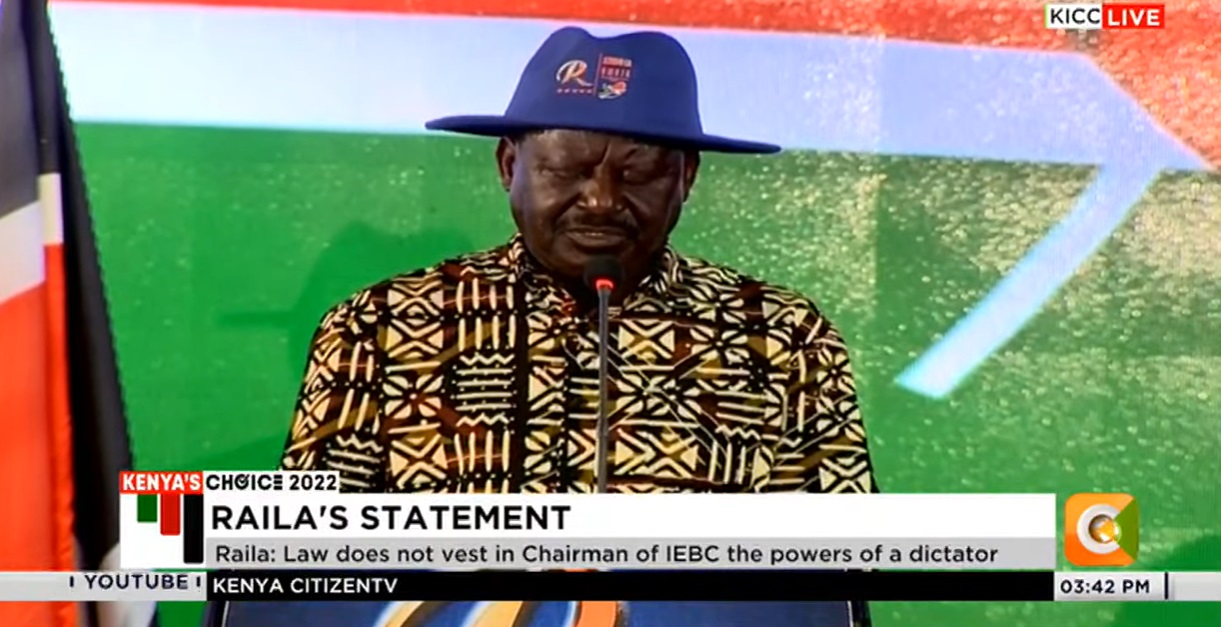 Kenyan elections have been some of the most drama-filled moments in my country, and unfortunately some of the saddest. I honestly do not think we’ve had a general election where no one has died. Monday night Daniel Musyoka, the missing Embakasi East Returning Officer for the Independent Electoral and Boundaries Commission (IEBC) was found murdered.  According to the police his body was discovered by herders at night in a river close to the Kilombero forest in Oloitoktok, Kajiado County. The police received a report of an unidentified, badly mutilated body dumped in a river. Once they retrieved the body, it was identified by Daniel’s sisters. The police suspect that Daniel was killed somewhere else before being dumped in the river. The Directorate of Criminal Investigation (DCI) for the Forensic Unit in Embakasi, Nairobi has now taken over the investigation. It is truly saddening, frustrating and sickening to know that there are people in this world who just do not care about their fellow men, and are even willing to kill them. They are willing to kill an innocent man who had a family waiting for him back at home. I cannot even begin to imagine how his family members must feel. The pain they are going through must be unbearable. The saddest part of this whole incident is that the chances of the culprits being caught are extremely slim. Kenyans sadly forget, especially when it is not someone famous. They will move on from this, and Daniel will likely remain forgotten just like the many before him. His family will just be like the many other families whose cries for justice have been left unheard. But maybe with Daniel it will be different. I truly hope the DCI proves everyone wrong and actually catches the culprit and brings him/her to justice.

At around midday Tuesday, word of Azimio Party Leader Raila Odingo holding a press conference at 2pm was announced online and that was all everyone was talking about. This press conference would determine what the future of Kenya would look like. People expected two possible outcomes from the conference: 1) Raila would either concede and admit defeat or 2) he would contest the results thus opening the doors for the possibility of another outcome to the elections. Therefore once 2pm was reached, Kenyans tuned into their preferred stations and waited for Raila to make his appearance. Imagine people’s surprise when the screen split to show that the 4 IEBC [electoral commission] members who Monday rejected the presidential results (Juliana Cherera, Francis Wanderi, Irene Masit and Justus Nyang’aya) were also holding a press conference at the same time, only in a different venue. Many, especially Azimio supporters, thought the commissioners were going to take back what they had stated the previous day. This is because yesterday they were under fire from pro-William Ruto UDA supporters online.  A lot of hateful comments were made about them, so it would not be a surprise if they took back what they said due to fear of how the public would view them. But the commissioners stood firm in what they believed in, and went on to explain their reason for rejecting the presidential results.

Juliana Cherera, vice chairman of IEBC, went on to give their main reasons as to why they were against their fellow commissioner, IEBC Chairman Wafula Chebukati, declaring Ruto as the president-elect. Their first reason was the fact that the result percentage given was not mathematically correct. This is because the results for the combined candidates showed 100.1% instead of the actual 100%. Moreover, the results did not include the totals of the registered voters, the votes cast as well as the rejected votes. There was also the issue of the last 30 constituencies that were not tallied. IEBC officials stopped announcing their tallies to the media once they were left with those 30 constituencies, hence no one knows how many votes were actually counted for those constituencies. The 4 commissioners tried to bring the issue of the constituencies up with their chairman, but all he told them is that he would take care of it and then he disappeared. The commissioners later found out that the results would still be announced on that very day and they could not understand why Chebukati was in such a rush to declare the winner. At 4.30 pm that very day, Chebukati called on them for a meeting and told them that the forms he had were the final results, and that he would be announcing the presidential election winner. This is when the split happened, since the 4 commissioners argued that he had not even given them time to go through the forms in order to discuss and verify the numbers. They asked for more time but Chebukati refused, which led to them holding a press conference to declare their stand on the matter and today they declared the results unconstitutional.

Cherera: Chebukati kept us in the dark on tallying of the votes.

Commissioners question why the chairman was in rush to declare winner pic.twitter.com/tXgjvjJKuT

Raila’s press conference started soon after the dissenting commissioners’ press conference ended. His conference was brief. He outrightly rejected the results and declared the elections null and void as far as he was concerned. He said that Deputy President William Ruto’s victory was unprocedural and went on to explain that it was unconstitutional for Chebukati to declare a winner without the unanimous backing of his commissioners. He therefore declared that he plans to exercise all constitutional and legal options available.

Meanwhile IEBC Chairman Chebukati has gone ahead and gazetted Ruto as president-elect and his running mate, Richard Gachagua as deputy president-elect. Various African presidents such as South Sudan president Salva Kiir Mayardit have congratulated Ruto on his win. The National Advisory Security Council has also advised Kenyans to return to normal, saying the streets are safe and Kenyans are therefore encouraged to go on with their daily lives.

Something that has also really disappointed me about this round of elections is the media. You would expect especially with the issue of the 30 outstanding constituencies, at least one station would have stepped up to say that they never actually witnessed the counting of the constituencies. But none has come out and said that despite the fact that it is well known that the IEBC officials did not announce their tallies, as they had done previously for the other 260 constituencies. None has stood up to ask why that was the case. They are all silent, despite them being in the best position to find out why on behalf of their fellow Kenyans. There is also the issue of how little coverage they provided of the protests that happened in various areas in Kenya yesterday night. If it were not for social media, we probably would not have known what was going on. It is honestly quite embarrassing that it was media stations from other countries that were the ones who actually wrote about the protests. Is it because the people protesting were from the slums that the media did not properly cover the story? These small acts are what makes people feel like they do mean much to their country. When their plight is treated as insignificant, that is what leads to people giving up on their nation or even resenting it. It is saddening and at times when such acts are done, can you even blame them for resenting their nation?

Today in general, there have been a lot of mixed reactions from Kenyans. We have the Azimio supporters who are happy that Raila, as well as the IEBC commissioners, have refused to back down, while on the other hand we have UDA/Ruto supporters who were not too happy with the announcements and have been viciously attacking Azimio supporters online. It has reached a point where a good number of Azimio supporters are afraid to say they support Raila, but with his recent announcement I am sure a lot of his supporters will regain their courage and defend themselves. We also have the neutrals who do not really care what happens and just want to move on with their lives, though there are some who act like they do not care but are dealing with loss by acting like they never actually cared. Additionally there are those who follow the wave, the kind of people who will always support the winning side regardless of whether they like the side or not. Then we have the parents who are angry that if Raila wins the court case, then that means the academic year will be delayed further. Most were hoping by next year the academic terms would be back to normal since they were altered due to Covid-19 in order to compensate for lost time. Then we have the group that has lost faith in the system and are simply tired – they do not want to be part of any general election ever again, and just the thought of doing a re-run exhausts them. Additionally, there is a group comprised of those who have given up and have declared they will never vote again. They have been disappointed so many times, either during the election period or even by the government themselves, that they have completely lost faith in Kenyan politics ever being saved.