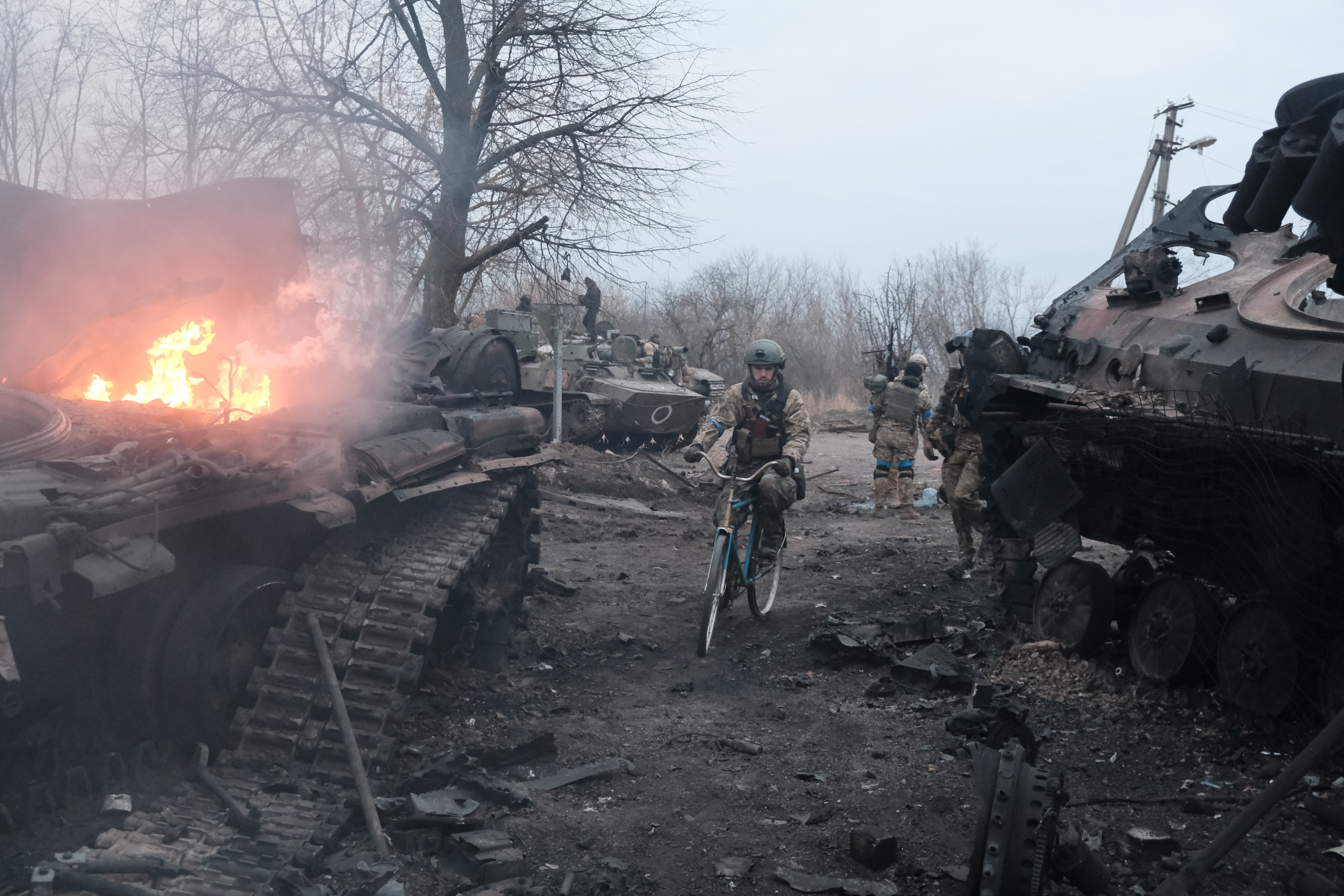 Law students and young lawyers in Ukraine are filing for JURIST on the latest developments in that country as it defends itself against the Russian invasion. Here, Kyiv-based lawyer and University of Pittsburgh LLM graduate Yaroslav Pavliuk reports.

Russia tried to justify its armed aggression against Ukraine by accusing the latter of committing genocide against the population of two so-called “republics” in Eastern Ukraine – in fact, Russian occupied areas under the effective control of Russia since at least the summer of 2014. Russia presented no evidence of Ukrainian crimes, let alone of a “genocide”.  On 27 February, Ukraine submitted an application to the International Court of Justice (the ICJ) under the Convention on the Prevention and Punishment of the Crime of Genocide (the Genocide Convention) to counter Russia’s allegations and hold Russia accountable for its invasion.

The ICJ is expected to opine on this important issue, which was not broadly developed and litigated before. However, an even more important question is whether Russia itself is committing genocide against Ukrainians?

My intention here would be to explore and analyze whether the crimes committed by Russia in Ukraine may amount to the genocide of the Ukrainian people as understood under international law.

So far more than a dozen nations have officially recognized the atrocities committed by Russia as amounting to genocide. This process became especially powerful after the crimes committed by Russian military forces in the suburbs around Kyiv, including mass killings, rape, and torture, were revealed to the public at the beginning of April. This appears to be a non-trivial signal considering, for example, President Macron’s initial refusal to use the word “genocide” to describe Russia’s actions.

On 23 March, the Parliament of Poland said in a statement that Russia must be held accountable for “for directing and committing war crimes, crimes against humanity, acts of genocide and systemic human rights” in Ukraine. On 27 April, the Canadian House of Commons recognized that the Russian Federation is “committing acts of genocide against the Ukrainian people”. In April, US President Joe Biden stated, “Yes, I called it genocide. It has become clearer and clearer that Putin is just trying to wipe out the idea of even being — being able to be Ukrainian.  And the amount — the evidence is mounting.”

In June, A bipartisan group of U.S. lawmakers introduced a resolution characterizing Russia’s actions in Ukraine as an act of genocide. The draft focuses on the facts that atrocities committed by Russian troops in Ukraine include attacks on civilians, the direct targeting of maternity hospitals and medical facilities, and the forcible transfer of hundreds of thousands of Ukrainians to Russia. By the way, the US Congress is also considering designating Russia as a state sponsor of terrorism, which, if passed, will effectively prohibit the “business as usual” kind of approach towards Russia.

All these official recognitions are important political signals and evidence of state practice, which is one of the elements of customary international law. They clearly show that many states view Russia’s actions as exceeding the threshold for ordinary crimes, even war crimes and crimes against humanity. However, the legal qualification of genocide may be a much more complicated issue.

Genocide: Elements of a crime

The crime of genocide is codified in the Genocide Convention of 1948. Article 2 of the Genocide Convention states that genocide means any of the following acts committed with intent to destroy, in whole or in part, a national, ethnical, racial, or religious group, as such: (a) killing members of the group; (b) causing serious bodily or mental harm to members of the group; (c) deliberately inflicting on the group conditions of life calculated to bring about its physical destruction in whole or in part; (d) imposing measures intended to prevent births within the group; (e) forcibly transferring children of the group to another group.

To prove the crime of genocide, one must both establish a mental element: the “intent to destroy, in whole or in part, a national, ethnical, racial or religious group, as such” and a physical element, which includes the five acts, enumerated above. The case law that a mental element is a consequence of the aggressor’s organizational plan or policy, and cultural oppression or dispersion of a group does not suffice. The whole group must be targeted as opposed to individual members of that group. In the case of the Srebrenica massacre, a 1995 atrocity during which Bosnian Serb and Serbian paramilitary forces systematically executed upwards of 8,000 Bosniak Muslim men and boys, the International Criminal Tribunal for the former Yugoslavia held the killings amounted to genocide.

The Russian officials, including President Putin, have stated repeatedly that there is no separate Ukrainian identity, that Russians and Ukrainians are one people, and any separate Ukrainian identity must be destroyed as such. A member of the Russian Parliament openly stated that “the very concept of Ukraine must not exist, and Ukrainians should not exist in the future”. Another Russian lawmaker stated that at least two million Ukrainians must be destroyed.

This policy is being implemented by Russian forces using so-called execution lists that included thousands of Ukrainians refusing to accept imposed Russian identity who must be killed as soon as Russian forces take control of the area. It is also being achieved by indiscriminate killings of the civilian Ukrainian population. There is evidence of some imprisoned Russian pilots that they were directly ordered to target to destroy the civilian population.

This tactic is further exacerbated by the destruction of Ukrainian books in the libraries, the shuttering of Ukrainian churches, and measures aimed at imposing Russian-approved and Russian-language educational curricula on Ukrainian children. It is estimated more than 150 Ukrainian cultural heritage sights have been destroyed. One of the most notable examples was the destruction of the museum of Ukrainian 18th-century philosopher Hryhoriy  Skovoroda, which had been located in a remote village in the Kharkiv region, far from any legitimate military target.

The present Russo-Ukrainian war is not about a piece of land, it is a war about the existence of Ukrainian identity and in many respects about the survival of Ukrainians. Undoubtedly, all the facts above can be used to present a strong legal case, and a multiplicity of facts taken together may be adequate evidence of genocide. It is the zeal of the prosecution and scholarly expertise of the judges that will draw a binding line.

I do not harbor illusions that armed conflicts will disappear completely anytime soon, although back in 1928 the Briand-Kellogg pact attempted to eliminate war as an instrument of national policy. I hope, however, that at least the countries must strive to play realpolitik in a civilized way – by adhering to the Law of the Hague and the Law of Geneva.

We have repeatedly seen that allegations of genocide have attracted inadequate attention and the lessons of Yugoslavia and Ruanda are not learned. In the case of the genocide of Uighurs by Chinese authorizes recognized as such by some nations – the overall response was rather weak, except for some statements and corporate actions of some businesses to suspend their relations with China, and China triumphed as the host of 2022 Winter Olympic Games. The ICJ is now considering a case Against Myanmar brought by the Gambia alleging the former of genocide against the Rohingya group. It remains to be seen what practical meaning that decision will make.

In this sense, Ukraine is fighting – both on the battlefield and legally – not just for itself, but to ensure that genocide is not repeated. If Ukraine prevails, it will mean that there is a way to persecute evil. Democracy must be armed – with the power of the law and the might of heavy military equipment.

Prime Minister Winston Churchill allegedly said, “You cannot reason with a tiger when your head is in its mouth.” Compromises with the aggressor make solutions harder, not easier. That is the lesson for those whose only interest is that global gas prices go down.

Such a weak response time and time again encourage dictators and aggressors all over the world to take advantage of the situation. If such rogue states as Russia wish to deny the obligations of a civilized nation governed by law and justice, they should be ready to lose the benefits of international trade and modern technologies in return. For now, Russia seems to live by the phrase attributed to Lenin, “The capitalists will sell us the rope with which we will hang them.”