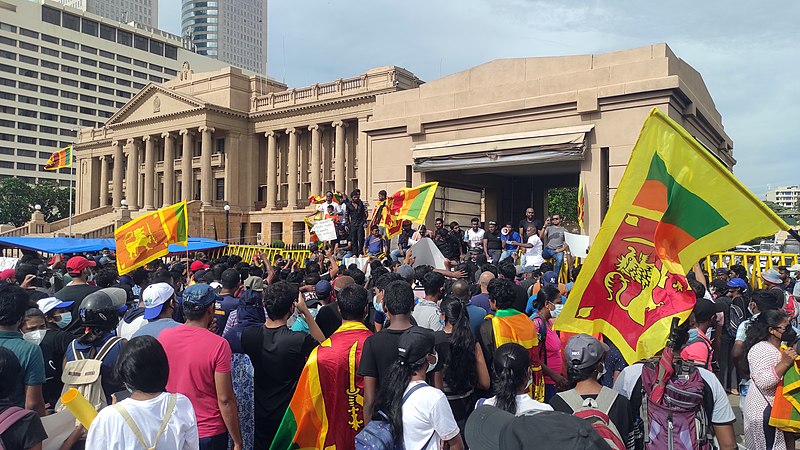 Sri Lankan law students are reporting for JURIST on the situation in that country since mass protests and the physical invasion of the President’s House in Colombo by demonstrators forced the departure and resignation of Sri Lanka’s president and precipitated the imposition of emergency rule. Here, Naveera Perera of CfPS Law School reports from Colombo.

Last Thursday, July 14th, Sri Lanka President Gotabaya Rajapaksa officially resigned from his duties whilst fleeing to Saudi Arabia. ‘Resigned’ is not really the correct term to be used in this context, however, as it implies that he left office under his own wishes. He did not. The people’s protests that have been occurring across the island of Sri Lanka, starting with the protest staged near the president’s personal residence in the town of Mirihana on March 31, have had one common goal: to make Sri Lanka’s 7th Executive President resign. Hence, what we should say is that “the people of Sri Lanka have successfully made President Gotabaya Rajapaksa resign”. Prior to this, the people’s protests also successfully made the former Prime Minister, Mahinda Rajapaksa, and the former Finance Minister, Basil Rajapaksa “resign” on May 9th and June 9th as well. While the protestors initial demands have now been met, the fight continues for an economically healthy, corruption-free island nation.

Let me tell you what the people’s protests are, or perhaps more accurately, are not. They are not affiliated with any political party, nor are they simply a group of people in Colombo, the capital of Sri Lanka, taking to the streets. Contrary to what might be concluded from the pictures seen only from the main protest site at Galle Face Green, now called ‘Gota Go Gama’ (a play on words on the ex-President’s first name, with the addition of “gama”, which means “village” in Sinhalese) people have been protesting in their hometowns island-wide. Despite one’s religion, personal political beliefs, race, or age, the people’s protest does in fact represent the whole of Sri Lanka.  Sri Lankans residing abroad, far from the turmoil in the country, have also carried out protests in Australia, the United Kingdom, USA, New Zealand, and more.

Why are there protests against the Rajapaksa family?

In 2005, Mahinda Rajapaksa was elected as the 5th President of Sri Lanka, together with his brothers – Basil Rajapaksa, who was voted into parliament and appointed as the Minister of Economic Development; Gotabaya Rajapaksa, who was appointed Secretary to the Minister of Defence; and Chamal Rajapaksa, who was appointed the Speaker of Parliament. It was during this period that the government of Sri Lanka defeated the Liberation of Tigers of Tamil Elam (LTTE), putting an end to the 30-year civil war in the nation. However, due to wide-spread allegations of corruption, discrimination against the Tamils and Muslims in the country, nepotism, and economic mismanagement, Sri Lankans elected a new government in 2015, ejecting the Rajapaksas.

In 2019, a series of terrorist attacks in Sri Lanka swung public support back to the Rajapaksa family as strongmen who defeated terrorists, and accordingly, 6.9 million voters elected Gotabaya Rajapaksa as President. The Rajapaksa family subsequently appointed themselves to three of the most influential positions in the government – the President, the Prime Minister, and the Finance Minister – and in those capacities started to adopt misinformed policies, such as drastic tax cuts in face of a significant budget deficit, banning of chemical fertilizers in lieu of a failed organic agriculture drive, unchecked money printing and use of foreign reserves to defend a collapsing Sri Lankan rupee, and strong refusal to obtain IMF assistance. These policies hastened Sri Lanka’s inevitable economic collapse and resulted in long lines at fuel and gas stations, 6-10 hour island-wide power outages, shortages of medicine and unprecedented inflation levels that ran above 30% from April 2022. Struggling to make ends meet, the people marched on the streets demanding their elected representatives resign and provide a solution to the economic crisis.

How violent were the protests?

The first peaceful protest in Mirihana, a district east of the the center of Colombo, attracted a large crowd who shouted and displayed written placards to show their dissent. It was however, soon suppressed by the Riot Police,the  Sri Lankan Army, Police Special Task Force, and Sr Lanka Navy Personnel, who used force against defenceless citizens, and arrested 54 people. 27 others were admitted to hospital. As clips of police brutality were shared across social media, people from all over Sri Lanka started peaceful protests in their hometowns. Most notably, large crowds made their way to Galle Face Green, which lies adjacent to the presidential secretariat and key government buildings in Colombo. At this point, protestors have been camping and protesting at Galle Face Green for over 100 days demanding the resignation of the president and his family from key government positions. Amidst the peaceful protests at Galle Face Green, heart-warming moments could also be witnessed, such as the celebration of local events including the Sinhala and Tamil New Year and Ramazan, the hosting educational talks, organizing the country’s first ever Pride March, and distribution of free food on a daily basis despite the economic difficulties in Sri Lanka. The eventual resignation of the President on the 14th of July is a testament to the strength and unity of the peaceful protestors.

But the protest was not without collateral damage. On May 9th, the homes of some key ministers in the government were burnt and damaged. The protestors claimed that these were actions allegedly carried out by individuals sponsored by the government. Notably, public accounts and media footage at the protests revealed protestors being battered by the police, subjected to tear gas, and being imprisoned on claims of instigating violence. Members of the armed forces have also opened fire at unarmed protestors, as observed in a protest at the town of Rambukwala on the 19th of April which resulted in civilian succumbing to police gunshot wounds.

While civilians at home and abroad made up the strength of the mass protest, a community of Sri Lankan lawyers played a critical role in ensuring the protest continued uninterrupted. Starting from the arbitrary arrests that occurred in Mirihana and elsewhere, hundreds of lawyers offered free legal services to bail protestors wrongfully charged with crimes and strongly called out the Government to withdraw unlawful curfews that were declared to prevent protestors from stepping out of their homes. The admirable role played by the Bar Association of Sri Lanka led by President’s Counsel, Mr. Saliya Pieris, has been a driving force in implementing justice and standing by the people, whilst vehemently condemning any protestors that were found to damage public property.

President Gotabaya has resigned – now what?

Under Sri Lanka’s constitution Art 40(c), the Prime Minister becomes the Acting President until a new President is elected. Accordingly, Ranil Wickramasinghe, the Prime Minister who was appointed after the resignation of Mahinda Rajapaksa, assumed duties as Acting President from 14th of July. Notably, Mr. Wickramasinghe entered parliament in mid-2021 via the so-called national list , after failing to be elected via the people’s vote, in which he acquired only a mere 30,000 votes in the parliamentary elections. Therefore, Mr. Wickramasinghe’s appointment to the premiership and ultimately to Acting President is viewed as undemocratic by protestors. He also faces significant opposition from the public at large as someone who allegedly protects the ousted Rajapaksa family. These factors may help to explain why he has issued a second state of emergency order today, although there is no new security threat.

It remains to be seen which one of the Ministers of the Cabinet will be the Acting Prime Minister of Sri Lanka, which the presiding Acting President has the power to appoint (as per Art 40(1)(c) of the Constitution). Although the Acting President will only remain in power until Parliament elects a President from one of its Members (as per Art 40(1)(a) of the constitution), this is an election open only to members of the parliament. Constitutionally, this must occur as soon as possible, not exceeding a period of one month from the date of vacancy (Art 40(1)(b)).

It also remains to be seen whether Ranil Wickramasinghe will gain support from the Parliament to secure his position as President until 2024 or whether a candidate that meets the wishes of the people’s protests will be elected.

The role of the people’s protests now is therefore to ensure its elected officials are not corrupt, to fix Sri Lanka’s ill economy and ensure its representatives work for the betterment of the Sri Lankan people.