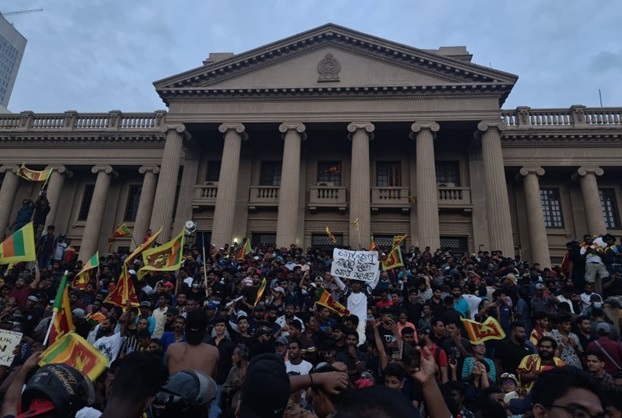 Sri Lankan law students are reporting for JURIST on the situation in that country since mass protests and the physical invasion of the President’s House in Colombo by demonstrators forced the departure and resignation of Sri Lanka’s president and precipitated the imposition of emergency rule. Here Saheli Wikramanayake, a final year law student at the Faculty of Law, University of Colombo, files this from the Sri Lankan capital.

Life in Sri Lanka is tough. The Central Bank estimates that in June 2022, food inflation was at 80.1%. Travelling to work, school, or university is impossible, but working from home is difficult because of daily power cuts. School exams are postponed because there is no paper in the country. Days are spent in queues for diesel, petrol, and cooking gas, and several people have already died in queues. Hospitals have run out of lifesaving medicines. Every day, people are pushed in more and more ways.

The response of the government has been deeply dissatisfying. Sri Lanka has been plunged into this economic crisis through a series of bad policy decisions, including tax cuts that drastically reduced government revenue, and a ban on chemical fertiliser. For months, even as people struggled to find essentials like milk powder and cooking gas, the government downplayed the gravity of the situation. Pushed to the limits, people began to protest.  Small, neighbourhood protests gradually grew into larger, mass protests. These have been largely peaceful, but the government has consistently tried to curtail them. Curfews have been imposed multiple times. Protestors have been arrested and intimidated. Social media sites such as Facebook, Twitter, and WhatsApp were temporarily blocked. The police and armed forces have used teargas, water cannons and have even shot at protestors. Low-flying helicopters, tanks patrolling streets, and heavily armed officers are used to intimidate. When protestors were attacked by a group that attended a meeting at the office of the former Prime Minister Mahinda Rajapaksa, the police were accused of failing to prevent the violence.

The protests have achieved significant victories. President Gotabaya Rajapaksa, along with his brothers, Mahinda Rajapaksa and Finance Minister Basil Rajapaksa, have been forced to resign. To oust such powerful figures is no mean feat. Yet, there remains a sense that the elected officials still do not understand (or care about) the demands of the people. On the 20th of July, Parliament elected Ranil Wickremesinghe as the executive president to replace Gotabaya Rajapaksa. Wickremesinghe, who has been in Sri Lankan politics for decades, is deeply unpopular.  His appointment is seen as undemocratic, and it means that there will be no accountability for the actions of the government, a common demand from the protests.

In the face of a callous and unresponsive government, the frustration of Sri Lankans is understandable. But if there is a reason for hope in these dark times, it is in the solidarity among the people who have found ways to persist during this crisis even where the government has failed. Take the protests, for example. Outside the Presidential Secretariat in Colombo, people have remained for over 100 days at a protest site called ‘GotaGoGama.’ Protestors who came to the Secretariat insisted that they would not leave until the president did. ‘Gama’ in Sinhala means village, an apt description of the protest site. Tents were set up. Donations of food and water came pouring in, feeding the thousands of people who visited every day.  A medical tent was set up to provide first aid. A library was established using donated books. Law students started a Legal Aid Clinic to answer questions from the public. A remembrance event was held to commemorate the citizens who were killed or forcibly disappeared during Sri Lanka’s recent civil war. Protestors of all backgrounds broke fast together during Ramadan. GotaGoGama spread to other parts of the country and even abroad. Day and night, through sunshine and rain, protestors remained, buoyed by the support from their fellow Sri Lankans.

Amidst the frustration and the anger, people are finding moments of joy and solidarity. Take the moment earlier this month where citizens entered the house of the former President. Videos of jubilant protestors in the pool, playing the piano, and cooking meals for all in the kitchen went viral on social media. The same spirit can be seen in the long queues for petrol and diesel, where people often strike up friendships with each other. If someone is going to buy food or water, they’ll buy extra to share with others close to them in the queue. People play cricket to pass the time. Videos circulate on social media of music and dancing. On a more serious note, people are encouraged to learn basic first aid in case someone in the queue falls sick.

Time and time again in the crisis, Sri Lankans have shown up for each other. When peaceful protestors were arrested, scores of lawyers showed up at the courthouses, sending a strong message to the government. Appeals from doctors on social media asking for donations of medicine and medical equipment are answered in hours. Community kitchens provide much needed nutritious meals to school children. Bus and train drivers transport people travelling to the protests for free. Even in such dire circumstances, many Sri Lankans help each other out however they can. Where the government has failed the people, the people have stepped in.

Some fear that this moment of solidarity among the people will not last, and that once the economic crisis is resolved, the nationalism that brought the ousted president into power in the first place will return. That is a valid concern. Change will not happen overnight, and requires much more work. But by uniting, Sri Lankans have not just helped each other survive in a time of crisis, but have created real, political change in ousting an all-powerful president. A few months ago, many thought this impossible. The people prevailed, together. Perhaps this will be the moment where Sri Lankans choose to build on this momentum and create a system that is more equal, accountable, and responsive to the demands of the people. That is a reason to hope in this difficult time.