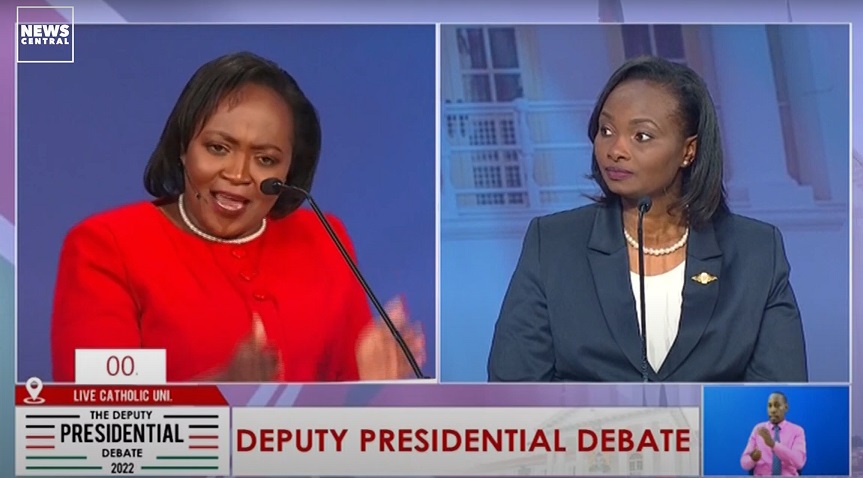 Kenya’s Deputy Presidential debate was held Tuesday at the Catholic University for Eastern Africa (CEUA) in Nairobi. The debate was divided into two tiers. The first tier involved the Deputy Presidential (DP) candidates whose popularity ratings, based on three recent opinion polls, stand below 5 percent, while the second tier involved candidates who have polled above 5 percent in the same opinion surveys. However, by the end of the debate there were those who argued that all the candidates should have been allowed to defend their case in the same room rather than splitting them up.

The first segment of the debate was between Roots Party DP candidate Justina Wamae and Agano [in Swahili, “agreement’] DP candidate Ruth Mutua. Talks on how to solve various issues such as corruption, high cost of living and unemployment dominated the first tier debate. Both leaders vowed to tackle these issues if given the opportunity.

DP candidate Justina Wamae, the dark horse of the entire debate, went on to aggressively defend her Party’s manifesto. She stated that if Roots Party got into power they would hang all those involved in corruption.  She went on to explain how Roots Party planned to tackle the issue of high cost of living by focusing on the promotion of the local market as well as by reducing the cost of agricultural products and importation costs. Moreover, they would legalize Bhang (an edible mixture made from the buds, leaves, and flowers of the marijuana plant) which would be used for industrial health and also because it would become an income earner to help pay off the debts that Kenya owes. When she was asked how she would ensure the Bhang does not get into the wrong hands, she replied by saying that the National Youth Service (NYS) would be placed in charge of overseeing marijuana farming across the nation. Many were impressed by her presentation mainly due to the fact that she offered solutions to the problems that many Kenyans are facing despite how radical those solutions were.

Her counterpart, Ruth Mutua, was against the hanging of corrupt leaders as well as the legalization of Bhang. One thing that could be noted about Ruth Mutua was that she is a firm believer in law and morality. Time and time again she repeated that the law was not at fault for Kenya’s problem but the leaders that were put in place. She therefore could not accept the Roots Party’s way of handling matters.

These two leaders may have had their differences, but one thing they agreed on is the fact that Kenya needs new leadership owing to that fact, and that the current leaders had failed the nation. “Our competitors have experience but have let us down. We want fresh blood and ideas,” Ruth Mutua said.  These appealed to many Kenyans but whether or not Kenyans will actually vote for these two women, only time will tell.

The second tier of the debate was between Azimio la Umoja (in Swahili, “resolution of unity”) DP candidate, Martha Karua and Kenya Kwanza  (“Kenya first”) DP candidate Rigathi Gachagua. The second segment received a lot of mixed reactions. This is mainly due to the fact that both leaders were more focused on tarnishing the other party’s name rather than discussing the actual problems facing Kenya like their counterparts in the first segment.

Richard Gachagua blamed corruption for the suffering of Kenyans and went on to focus on the issue of state capture. He at first stated that families such as the Kenyatta family (Kenya’s first family) are to blame and that their property should be investigated but later in the debate went on to backtrack his statement by claiming that he was not pointing fingers at anyone. This confused some but there were others who were pleased by the simple fact that he mentioned the family in the beginning. Martha Karua presented herself as someone who will stand for integrity and the betterment of Kenya, but there are still those who have their doubts about her due to her Party’s association with the current president, Uhuru Kenyatta. There was a good number of Kenyans who have commented on this point and have said they would not vote for the Azimio party due to its connections with President Uhuru Kenyatta, the man who has led the country into a mountain of debt.

The second tier debate mainly focused on corruption in Kenya. However the difference between the first segment and the second segment was that whereas in the first segment the leaders attempted to provide solutions the second segment barely mentioned how they would actually tackle the issue on corruption. This led to many being disappointed not only in the leaders but also in the moderators who mainly focused on asking personal questions rather than the current issues facing the country. Some people were angry that the high cost of living issue only came up in the last few minutes of the debate. Issues such as debt, job creation, climate change and even education did not even come up. Considering the fact that the majority of Kenyans support these two leaders, it was quite surprising that none of them even mentioned these issues, especially as issues such as unemployment are a major problem for most Kenyans. It was quite disheartening for some, especially for those who were hoping to hear their leaders talk about the issues their supporters are facing and ended up mainly seeing their leaders bashing each other for nearly 90 minutes.

Many commented on the second segment being a waste of time and are hoping the Presidential debate will be better. However despite all these complaints, there are still those who were very pleased with how the respective candidates carried themselves. Moreover, there are some who because of the debate, ended up being convinced that they should participate in the general elections set to happen on August 9th 2022. In the end, one prayer common to most Kenyans is that the elections be peaceful regardless of the outcome.