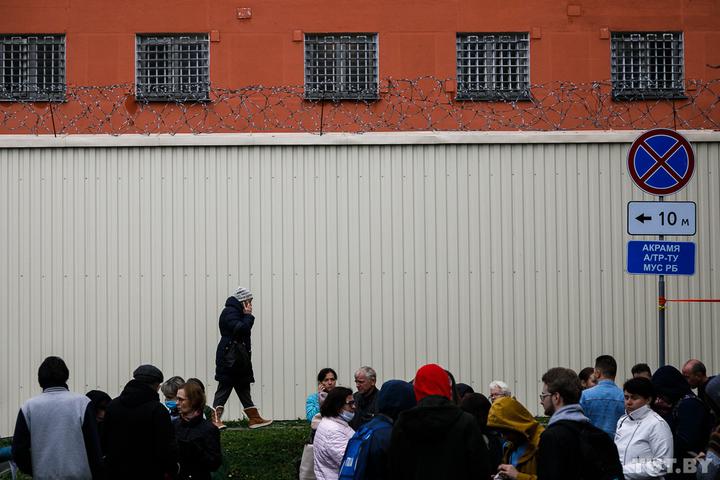 JURIST Belarus correspondent Ulyana Belaya is currently a student in the International Law and European Union Law program at the European Humanities University, Vilnius, Lithuania. She left Belarus in September 2021. The text of this dispatch has been lightly edited to preserve the author’s voice.

The Russian war against Ukraine has lasted 113 days so far. This means it is the 113th day of Russian weapons being delivered from Belarusian territory. In a previous JURIST dispatch I wrote about the Russian occupation of the territory of Belarus and I mentioned the bravery of Belarusian people who keep protesting and supporting Ukraine. However, the question of the collective responsibility of Belarusians still arises. That is why I would like to describe what repression against those who took part in anti-war protests – and against those who didn’t as well – look like in Belarus right now.

To write this dispatch I talked to my acquaintance, L., who was courageous enough to share her experience. She is 18 years old and she was detained on February 28th and sentenced to 15 days in prison. She, her friends, her sister weren’t doing anything – just standing in the square next to the railway station in Minsk, Belarus. At first I thought I would describe her experience and comment on where and how her human rights were insulted. Then I decided just to retell her own words with a few explanatory interjections. This is just what life in Belarus looks like now.

In the previous paragraph I sais that L was ‘detained’. That is how L. describes what happened to her:

We were standing on the square, and we had even bought tickets to go to our friends. We decided to go there if the protest [a protest against the war in Ukraine] wasn’t successful. There were around 50 people also standing next to the station, but it was obvious that most of them were police. They weren’t wearing any uniforms, but we all now know how to distinguish them even in civilian clothes. Moreover, some of them had cameras and were taking pictures of others. At a certain point some of them separated from the crowd and came to us. They did not identify themselves or explain what was happening. They ignored our tickets and asked us to follow them.

So at no time during L’s detention, or after her arrest or during her trial were any explanations given to the detainees. Nor was there any documentation of their detention.

After giving all the information at the police office I asked if I could go. The policeman said ‘Yeah, of course’, and I was going in the hallway happily smiling that nothing wrong had happened. But the moment I opened the door out, I saw a prison truck. I thought I was free to go, but only a little bit further!

L. could not even get any answers to her questions during her trial:

The judge asked whether I wanted to file any request for the trial. I had no idea what I could require, so I asked the judge. She just clicked her tongue and did not explain anything. During the trial I also asked some other questions, and she just shouted at me.

We had to wait for the trial the whole day since the morning. Waiting means standing in the hallway, facing the wall and holding hands behind your back. Those who wanted to use the bathroom had to beg for it. I wasn’t able to get through such humiliation, therefore I just stood there for 9 hours. It was also very nerve-wracking, as you never know what awaits you: a day, a week or a year in prison. The trial was in the usual chamber, where there was a place for a laptop, for me and for the policeman. We stayed there for about 15 minutes, and only 5 of them were actually the trial. The rest of the time the policeman was just trying to connect with the judge via Skype. The witness was wearing a neck face mask, covering all his face, and he was basically reading his evidence from the paper. Afterwards some of my acquaintances told me that during their trial the witness had the nickname ‘KGB’ written in the app; the others saw that the witness was openly marked as ‘Forsworn’. The judge was shouting at me for asking questions and for expressing my mistrust for the trial. I regret not answering very much, as now it is obvious for me it won’t influence anything. All of us, about 70 people who were convicted that day, had our terms prejudged.

Then L. mentions her cellmate, who was criminally charged:

I have no hope she will be free. I used to believe, but now I know how Belarusian justice works. No hope anymore.

At the very beginning I said that this article would be about repression of anti-war protestors. However, some people are being detained truly for nothing. L. tells about her cellmate in prison:

We both were 18 years old, so we were the youngest. She was just coming out of the subway and detained for nothing. She didn’t know anything about politics, and she asked ‘Who is Tsikhanouskaya?’. She was a political prisoner, though.

L. tells about her experience with loads of jokes and refers tenderly to the people she went through it with.

31 out of 32 women in our cell had higher education or were getting it. We created a schedule, where we had English and French lessons and some other lectures. We listened about Jewish culture and about women’s rights. We also did exercises every morning.

Everyone was so kind to each other. I spent 15 days there and there were no arguments or quarrels. I felt such strong solidarity. On the first day a prison worker came to tell us they didn’t have enough food for everyone. So they gave something to eat only to the half of us, but I was so impressed that we all shared food without any doubt or argument.

Problems with food supplies were normal:

We had breakfast at 6 am, lunch at 2 pm and dinner at 6 am. One day they didn’t give us lunch. We asked where it was, and the policeman said ‘Let me see’. He didn’t come back until dinner time.

L. mentions that kind of constant lies and ignorance from the prison workers as something that was the most shocking to her:

As political prisoners, at the temporary detention facility we were sleeping without mattresses. Some women were trying to complain about that and demanded mattresses. The jailer said ‘We are not that type of institution that has mattresses’. The next day we were going to the trial and we saw piles of mattresses lying in the hallway. There were so many of them! And we had to sleep on bunks with huge holes or even on the floor.

At the jail they refused to give medication, saying they did not have any. But we were able to see through the door that they did.

Absence of medication and medical help led to horrible incidents that L. told me about:

There was a woman with some chronic disease, something with her kidneys. She had to take medication every day a few times, but she wasn’t given it. On the 4th day we thought she was dying, as she wasn’t able to open her eyes. We were shouting and demanding an ambulance. And it finally came after 5 hours of waiting.

Another woman had an epileptic fit. For 4 hours we were asking the jailors to call the ambulance – and that was relatively fast.

By the end of my term almost everyone got sick. Probably, it was an infection or it was just too cold in the cell. Anyway, almost everyone had a fever and there were no medications at all.

To be honest, I have no idea how to comment on the awful living conditions at the prison. L. had experienced sleeping on the floor; being in the prison cell with 40 people at the moment (whereas it was intended to be used for only 4 prisoners); absence of hot water; and no toilet paper.

Once they offered us to take a shower. I felt something was wrong, so I didn’t go. Those who did, told us that they only had time to get their clothes off. The water started running and stopped after about a minute. So they didn’t have an opportunity to get a wash and all of them came back just wet.

All these humiliating conditions were only for political prisoners. And against the background of the war that was even more dreadful.

The jailers were drinking a lot. I was told that once they were drinking, and then breaking into the cell with men and beating them. Meanwhile they were listening the song called ‘Sky of the slavic’, which is a hymn of Russian nazis.

Once all the women started coughing for no reason. There was some sort of gas in the room, and the workers were suffering from it too. However, it stopped after a while. And we heard the men from the next cell. They were coughing, not able to inhale, and that was the most horrible sound I have ever heard. As usual, no explanation from the police. But some of us, who had taken part in the 2020 Belarusian protest, recognised the gas. Peaceful protestors were chased with it. We decided that they wanted to punish the men but miscalculated the amount of the gas.

Every day we were examined in the hallway. We were just inspected by a woman. But then the men were beaten during the inspection. A dog was sick after them, and they were made to run.

One night we heard that a man felt so bad he wasn’t able to stand up and walk. So the jailers were deriding him and shouting ‘Slide faster! Faster!’

The policeman told my sister that we all are nazis. She wished him to be killed in the war as soon as possible.

L. mentions dreadful things, like being forced to stand up for hours just because the prison workers wanted it, or sleeping on the floor with lights on as usual. She says:

I did nothing abnormal, I was just detained on the street. Thousands of Belrusian have gone through this.

And she is right. Belarusian authorities are trying to hide the protests. For instance, detainees are convoyed at night so that nobody could see how many prison trucks are coming. Despite all the terror and oppression, Belarusians keep fighting.

L. and her sister were kicked out of the university after that. Which is also a part of the repression machine. But she says:

I do not regret anything. I remember when we were transferred to another cell. And there was a book – a part of normal life, a book! – there. It was the biography of Lesya Ukrainka. And we decided to fortune-tell with it. We asked ‘Will there be a free Belarus?’ and the answer was ‘We received greetings from London, Geneva and Paris’. That is what I hope for.