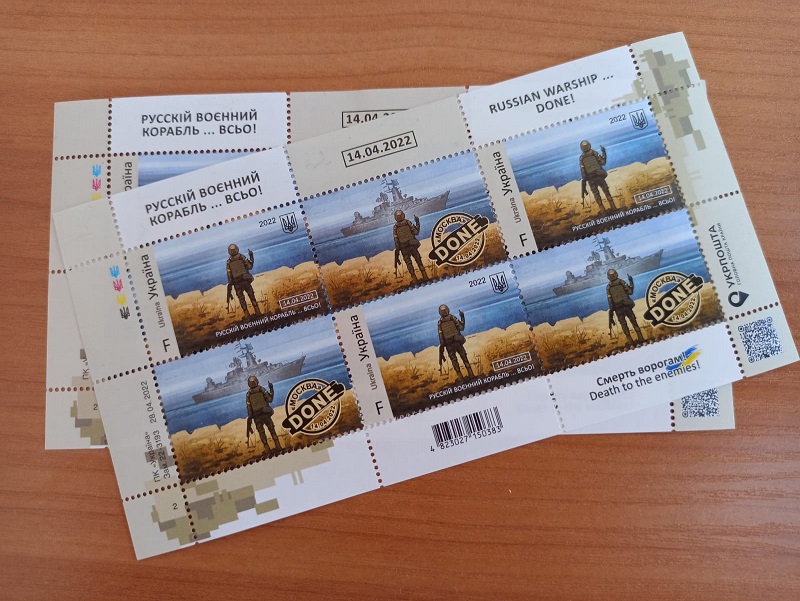 Law students and young lawyers in Ukraine are filing for JURIST on developments and issues arising as the country defends itself against Russian invasion. This report is from JURIST Ukraine Chief Correspondent Anna Tymoshenko, a law student at Kyiv-Mohyla Academy.

The story depicted on this very special Ukrainian stamp is rich in symbolism. To me, it is a prophecy of Ukrainian victory and a reflection of our people’s courage.

On the first day of the full-scale Russian invasion of Ukraine in February, Russian ships attacked a garrison of Ukrainian border guards stationed on “Snake Island” (Zmiyiny in Ukrainian). A total of 13 Ukrainians were pitted against a massive ship with a crew of nearly 500 and combat equipment capable of destroying the entire island in a single second.

According to the published recordings, Ukrainian border guards are addressed in Russian:

“I am a Russian warship. I propose that you lay down your arms and surrender to avoid bloodshed and unjustified casualties. Otherwise you will be bombed. Do you copy?”

In response, the Ukrainian side famously said: “Russian warship, go f*ck yourself!”

The occupiers used combat aircraft after firing on Snake Island from the ship’s gunbarrel. On the same day, it was reported that all of the island’s border guards had died, as the island had been occupied and communication had been cut off. The military received the “Heroes of Ukraine” award posthumously.

The phrase the Ukrainian defenders used spread on social media as a symbol of tenacity, resistance, and uncompromising nature of the Ukrainian heroes. It has since appeared in paintings, memes, news articles, and even international political platforms. Billboards were also placed in Ukrainian cities and on roads so that the enemy who was about to occupy could see how welcoming Ukrainians were to him. Following this popularity, Ukrposhta (the Ukrainian Postal Service) announced a competition to design a postage stamp with the known content of one sentence. Nearly 500 letters with sketches were received, and the Ukrainian people voted for the best. My personal favorites were three designs, one of which won. This is the work of Ukrainian artist Borys Hrokh.

While the bravery of border guards was being celebrated in Ukraine, it was discovered that some of them were still alive and in Russian captivity. They were released and returned home one month later.

And now for the most exciting part! The stamp went into circulation on April 12. Two days later, the same “Russian warship” (the cruiser “Moscow”), was sunk by Ukrainian military missiles. Its captain, who made the surrender offer, drowned as well.

Following that, Ukrainians valued the stamps even more. People waited for hours in line. Because of the stamp’s morale value, some people are attempting to profit from it: it can be found for $250 in Ukrainian online stores, and it was sold for $ 1,000 on eBay. While I strongly oppose such speculations, the free market’s rules are working like that.

The stamp’s circulation is quite limited – only 1 million. Ukrposhta has no legal authority to increase circulation. Philatelists will undoubtedly find their way to obtain a copy. However, for Ukrainians who want to own this piece of history but have not been able to purchase it before, a new format of the same stamp was released a week ago with a circulation of 5 million: “Russian warship… DONE!”

This is the design I managed to get! I will leave one block to myself – for a memory of these difficult times and the Ukrainian courageous spirit displayed in them, and I’ll share the other stamps with friends. This story appears to me to be a symbol and a sign of Ukraine’s victory: the aggressor was destroyed, while the Ukrainian heroes are still alive and safe on their Homeland.