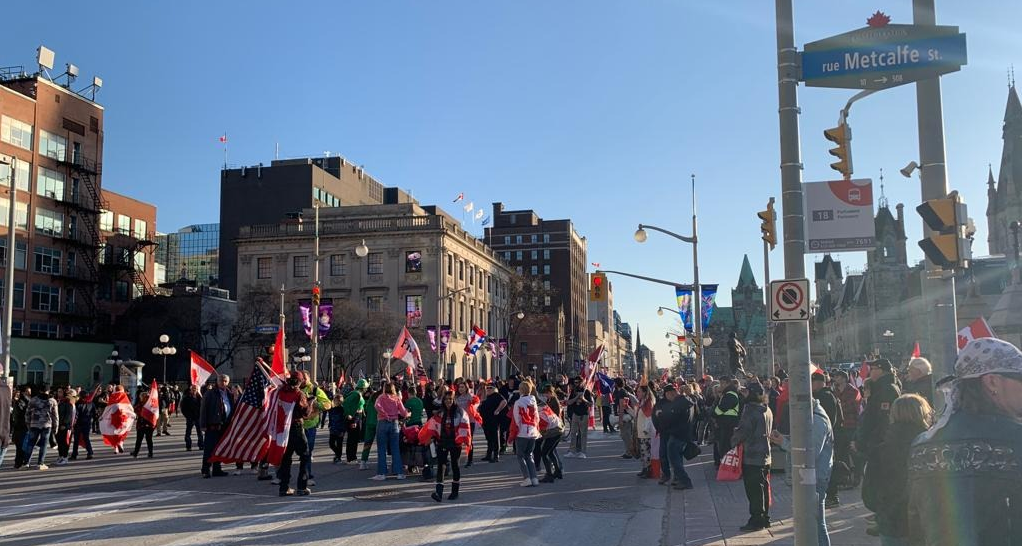 Mélanie Cantin is a JURIST Staff Correspondent in Ottawa, and a 1L at the University of Ottawa.

On Friday, protesters descended on the Canadian capital once more to make known their displeasure about COVID-19 mandates, Prime Minister Justin Trudeau, vaccines, and much more. I made my way to Parliament Hill Friday evening to witness the first of the weekend’s events – the rally and march – and to speak to participants about their protest.

The “Rolling Thunder” demonstration was organized by Freedom Fighters Canada, a non-profit organization that advocates for “the end of all government mandates” and “the end of all tyrannical bills and legislation,” according to its website. The name of the event was likely a reference to the thunder-like sound of revving motorcycle engines, which could be heard throughout the downtown area this weekend.

Many bikers joined the demonstration, with an estimated 300 motorcycles partaking in the ride around the city on Saturday, following a ceremony at the National War Memorial. The event schedule also included a Friday evening rally and march near Parliament Hill (which I attended for JURIST) and a church service at Capital City Bikers Church yesterday morning. The vast majority of participants were present on foot, although there were handful of vehicles in the protest zone. This is in stark contrast to the February “Freedom Convoy” occupation, which saw downtown Ottawa streets completely blockaded by trucks and makeshift campsites for approximately three weeks.

According to organizer Neil Sheard, the Rolling Thunder protest sought to return dignity to the National War Memorial, as it had been “desecrated by the powers that be” when police put up fences around it and removed protesters from its surroundings during the Convoy occupation. At the time, protestors had been spotted urinating on the monument and jumping on the Tomb of the Unknown Soldier.

Like the Convoy, however, Rolling Thunder soon morphed into a many-pronged demonstration with barely more than opposition to Trudeau and COVID-19 mandates to tie it all together. Indeed, aside from the streamlining of crowds (both vehicular and pedestrian) by police, and of course, the absence of trucks, there was little to differentiate Rolling Thunder from its February counterpart.

Protesters predominantly carried Canadian, American, and Québécois flags, with a few Patriote (1830s Lower Canada rebellion) flags also making appearances. The crowd repeatedly shouted “freedom” and “liberté” while ringing bells and setting off megaphone sirens. Other commonly yelled phrases were “f**k Trudeau” and “hold the line” and there was much singing along to “Thunderstruck” by AC/DC, which played on a loudspeaker. Horn honking was noticeably missing from the din of the crowd.

These similarities to the Convoy brought about enough worry and irritation to spawn a counter-protest (dubbed the “Unwelcome Party”) in Ottawa’s Strathcona Park on Friday. Critics have called the “freedom” events held in the capital over the weekend ignorant and tone-deaf, particularly in light of the war in Ukraine, which gained increased international attention shortly after the end of the Convoy. Veterans have expressed displeasure with the “usurping” of their community by the protest, much like many truckers distanced themselves from the Convoy that claimed to be in Ottawa on their behalf.

For participants, though, riding on the Convoy’s coattails has obviously been a source of pride and galvanization. In a video of the Friday march, a protester can be heard yelling “Wakey wakey Ottawa, look who’s back!” in a megaphone. Many of the folks I personally spoke to or overheard talked excitedly about having attended the February protest for several days.

Jonathan, who I talked to first, is a resident of the Vanier area of Ottawa, and regularly attended the protests in February. He best exemplified the fact that this protest was a site to air out an eclectic mixture of grievances. The sign he was holding contained a list of a dozen slogans and buzzwords representing issues he admitted were not necessarily related to each other, nor to what many of the other protestors were saying. In a 7-minute video, he talked about vaccines, transgender issues, Christianity, freedom of expression, and PPC leader Maxime Bernier. Jonathan went so far as to call the Convoy a “leftist dance party” in what it had tried to do, this being in comparison to the things he wanted to see accomplished in Canada.

Another participant expressed frustration with COVID-19 mandates, Facebook censorship, and the high cost of living. Despite living 7 hours away, he attended the Convoy on five occasions and again made the trek to Ottawa for Rolling Thunder Friday. He expressed his opposition to mandates and his skepticism regarding the effectiveness of the vaccine. His frustrations have been brewing since the very beginning of the pandemic. “I wanted to do something like this before the truckers’ thing,” he told me, “but I’m only a small person, I don’t have a big crowd of people to start something, so it was great that the truckers did it.”

One significant disagreement I observed among Rolling Thunder protesters was regarding the increased police presence in downtown Ottawa. There was often undecipherable shouting whenever more officers entered the area of Wellington Street in front of Parliament Hill, where the crowd was congregating. In close succession, I witnessed a handful of demonstrators striking up light conversation and asking to take pictures with officers while their companions booed and shouted “f**k the police” while making offensive gestures at passing police cars and motorcycles. Instigators popped up frequently and were often shut down by none other than their fellow protestors. Interestingly, and unlike in the Convoy, I was unable to locate a single “Blue Lives Matter” banner or pro-police symbol.

Ottawa Police Services said in a statement that as of 11:55pm on Friday, 7 arrests had been made and 24 vehicles had been towed. They have since announced that another 3 arrests were made on Saturday. During a meeting with city officials, Rolling Thunder organizers have vowed to leave Ottawa by Monday.