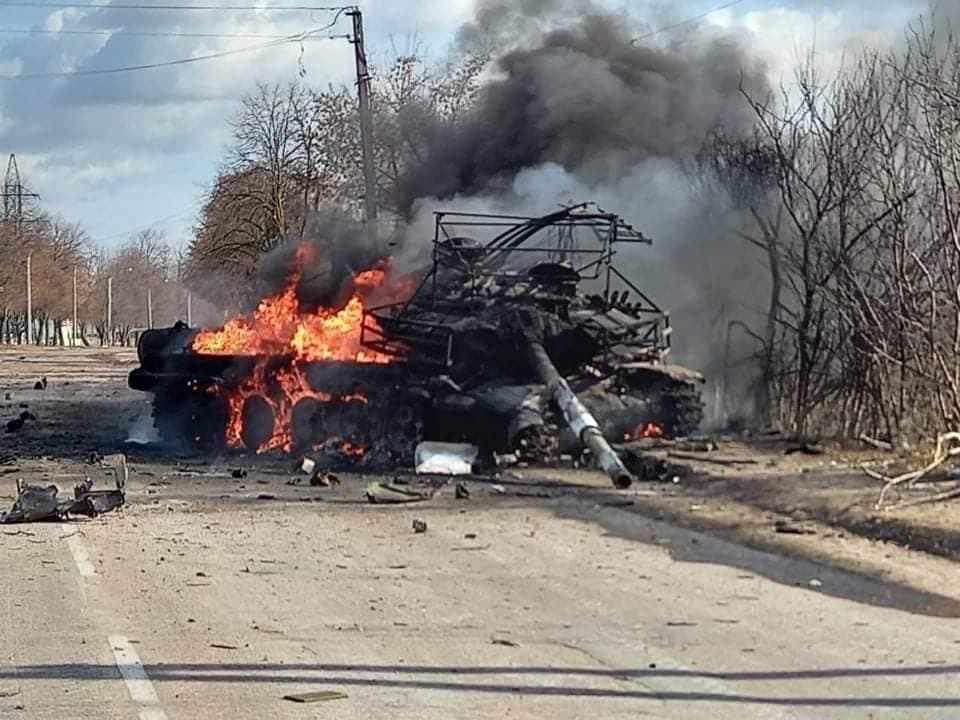 Law students and young lawyers in Ukraine are filing for JURIST on the latest developments in that country as it defends itself against Russian invasion. Here, Kyiv-based lawyer and University of Pittsburgh LLM graduate Yaroslav Pavliuk reports.

The full-scale Russian military aggression against Ukraine is being increasingly compared to Hitler’s invasion. Ironically (or intentionally!), Russian missiles hit Ukrainian cities at 4 a.m. on 24 February 2022, just like Nazi missiles hit Kyiv at 4 a.m. on 22 June 1941.

As the situation evolves, it seems that the methods of the Russian and Ukrainian armies are not much alike.

During the first five days of combat, Russian forces attacked dozens of civilian targets, which do not qualify as legitimate military targets under international law. These targets include kindergartens, schools, hospitals, and residential buildings. Ukrainian civil aircraft Antonov 225-Mriya (“dream” in English), the largest civil transport aircraft in the world, was destroyed by a Russian bomb. Russian missiles desecrated the Babyn Yar memorial complex, where tens of thousands of Jews were massacred during World War Two. New alarming news suggests that Russia is planning to target cultural heritage sites, including the 11th century Kyiv St. Sophia Cathedral.

A town of Okhtyrka in North-Eastern Ukraine was hit by a vacuum bomb. Today, Tuesday March 1, the local government building in the city of Kharkiv was hit by a cruise missile killing ten people and wounding many more. A ballistic missile hit a residential multi-store building in Kyiv destroying several apartments on five stores.

There are at least several cases where members of the Russian military shot innocent civilians. Russia fired hundreds of cruise and ballistic missiles denominated “Iskander” and “Kalibr” on Ukrainian military and civil targets so far.

According to the Ministry of Healthcare of Ukraine, at least 352 civilians, including 14 children were killed. These blatant violations of international humanitarian law and the law of armed conflicts is probably the most shocking episode of this unprovoked aggression. That is why it is so important to ensure that all crimes are properly documented and prosecuted.

The Office of the Prosecutor General of Ukraine has already assembled a team to collect evidence of war crimes and hold top Russian military and political commanders responsible. The legal front is of utmost importance. This is a battle for the soul of the world.

On 27 February, President Zelensky announced that Ukraine had submitted its application against Russia to the International Court of Justice (“ICJ”). The application is not yet publicly available, but, apparently, it is based on the Convention for the Prevention and Publishment of the Crime of Genocide (“Genocide Convention”). Ukraine is already pursuing another ICJ case based on the Convention for the Suppression of the Financing of Terrorism and the Convention on the Elimination of All Forms of Racial Discrimination for Russian occupation of Crimea and Eastern Ukraine in 2014. There may be certain jurisdictional issues, since Russia does not accept the compulsory jurisdiction of the ICJ, but Ukraine may try to claim the ICJ has jurisdiction based on the Genocide Convention. When it comes to the merits of the case, the crime of genocide has a very high legal standard to prove, and the allegations of genocide were dismissed by ICJ in some previous legal cases. However, Ukraine may try to prove that Russia violated the Genocide Convention by accusing Ukraine itself of genocide against ethnic Russians (completely baseless though) and using it as a pretext to start a full-scale military aggression.

On 28 February, the prosecutor of the International Criminal Court (“ICC”) Karim A.A. Khan QC, decided to proceed with opening an investigation into the situation in Ukraine. Ukraine has not yet become a State Party to the Rome Statute of the ICC. However, Ukraine legally accepted the ICC’s jurisdiction over alleged crimes under the Rome Statute occurring on its territory. Mr. Khan’s statement says that “there is reasonable basis to believe that both alleged war crimes and crimes against have been committed in Ukraine”.

On 28 February, Ukraine also filed an application to the European Court of Human Rights (“ECHR”) under rule 39 of the Rules of the ECHR requesting the ECHR to indicate interim measures requiring Russia to stop targeting civil infrastructure. On 1 March, The ECHR decided “to indicate to the Government of Russia to refrain from military attacks against civilians and civilian objects, including residential premises, emergency vehicles and other specially protected civilian objects such as schools and hospitals, and to ensure immediately the safety of the medical establishments, personnel and emergency vehicles within the territory under attack or siege by Russian troops”. It is very unlikely that Russia will comply with these interim measures. Since 2015, Russian domestic laws allow it to disregard the decisions of the ECHR.

The legal battles being fought now are as important as the military ones. While political decisions must be taken in Brussels and Washington D.C to assist Ukraine, I hope that The Hague will also speak loudly. Ukraine’s defeat will mean the end of law.