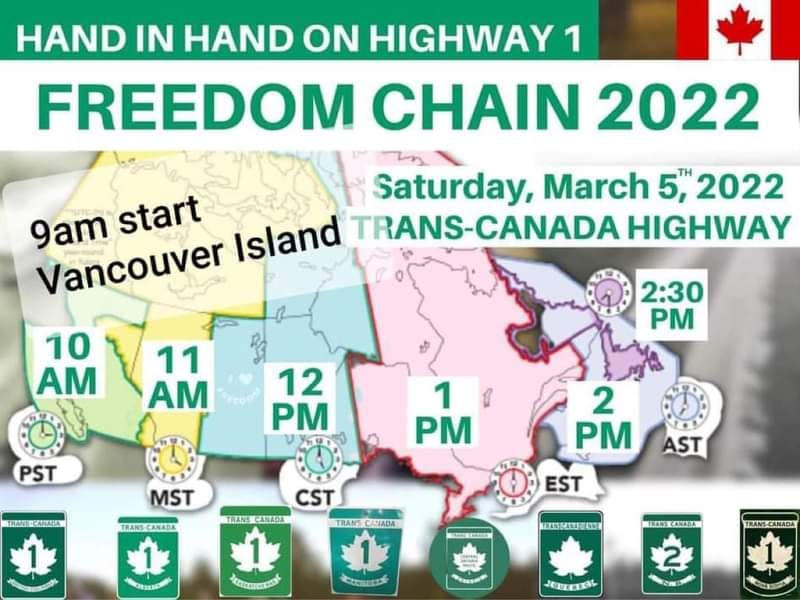 Unbeknownst to many now that the Freedom Convoy has been cleared out of Ottawa, similar protests are still happening across Canada. On February 21st, right around the end of the Ottawa occupation, a private Facebook group was created, calling itself “Freedom Chain 2022”.

As of Sunday March 6th, the Facebook page had amassed at least 22,300 members. The movement claims to be “organized and lead [sic] by God” and social media discussions revealed that its participants planned to form a hand-holding chain along the full length of the Trans-Canada Highway on Saturday. The protest wanted to show “coast to coast” solidarity in opposing the continuation of COVID-19 health restrictions, as well as vaccine and mask mandates.

The hoped-for nationwide chain did not ultimately manifest itself, but several small segments of the highway did see groups of protesters holding flags and signs. Some of them even had mini-tailgate parties with barbecued food and outdoor games for children. From Salmon Arm, BC, to Battlefords, SK, to Rimouski, QC, protesters showed up under the banner of the Freedom Chain movement.

In Ontario, the municipalities of London, Peterborough, Barrie, Cochrane, and Elliot Lake saw notable protests along their stretches of highway, on both the shoulders and overpasses. There was also a small demonstration on Parliament Hill in Ottawa in solidarity with the movement. Most Ontario COVID-19 health measures were lifted by Premier Ford on March 1st.

Just across the border in Québec, a notable number of protesters showed up in Drummondville, Rimouski, Beloeil, Lévis, and Rigaud, with the most mediatized protest seemingly being the one in Lévis. According to local organizer Guillaume Fortin, the event was family friendly, and had music, inflatable games, food, and refreshments. The Québec protestors in particular have stated they want to see the provincial state of emergency lifted by Premier Legault, deeming it an “overreach” by the government.

Resemblances between the Freedom Chain and the Freedom Convoy do not end with their similar names and views on COVID-19. Like the Convoy, the Freedom Chain demonstrations on Saturday saw a similar onslaught of Canadian flags (and Québéc flags for the protests happening over there) alongside a handful of American flags and the all-too-common assortment of right-wing symbols. These included pro-Trump, Gadsden, and Patriote flags, all of which were also spotted during the Ottawa protests.

Freedom Convoy media representative Dagny Pawlak said that “the Freedom Convoy extends its moral support to all those advocating for civil liberties through peaceful means” but denied affiliation with the Freedom Chain movement. She specified that it was not a “regroup/continuation” of the Convoy, something many have come to assume in light of truckers regrouping on the outskirts of Ottawa.  “[The Freedom Chain] may very well be inspired by [the Freedom Convoy],” Pawlak added. “But the original Freedom Convoy 2022 organization is not responsible for or affiliated with any demonstrations that are or will be surfacing across the nation at this time.”

This makes sense as the Convoy’s main organizers almost all find themselves either on bail with strict conditions not to support or discuss the Convoy (as is the case for Chris Barber) or currently in custody after being denied bail (as is the case for Tamara Lich and notorious Convoy participant Patrick King).

Indeed, that situation has elicited demonstrations of its own at the Ottawa-Carleton Detention Centre (OCDC) on the weekend as well, with protesters claiming that this was going to be a “weekly protest” until the “political prisoners” were released from custody. The poster promoting the demonstration lists Tamara Lich, Patrick King, Tom Billings, and Steve Charland as being “illegally imprisoned without bail.” Approximately 100 people showed up with signs and flags, and brought speakers that played loud prayers and music (notably Elvis Presley’s “Jailhouse Rock”) while demanding the release of King and Lich in particular. King was denied bail on February 25th, while Lich had hers denied on the 22nd. Lich has since had a bail review hearing where she alleged judicial bias and other errors of law had occurred during her initial hearing. Her proceedings are set to resume on Monday March 7th.