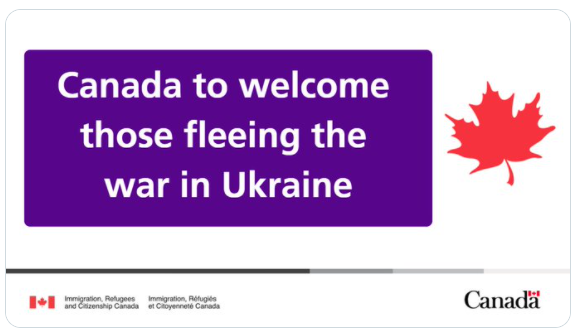 The Canadian program aiming to respond to the expected influx of people fleeing Ukraine is now officially live on the Immigration, Refugees and Citizenship Canada (IRCC) website. A  news release has details and clarifications about the previously announced program.

The Canada-Ukraine authorization for emergency travel (CUAET) is “a special, accelerated temporary residence pathway for Ukrainians seeking safe haven in Canada.” This pathway enables Ukrainians to apply for a Canadian visitor visa free of charge, and they can then remain in Canada as temporary residents for up to three years. They can also apply for work permits at the same time, and employers willing to help out have been encouraged to add postings to a dedicated page of the Canada Job Bank.

The CUAET requires applicants to provide a valid Ukrainian passport or “another national identity document” to apply, and allows those who can’t necessarily provide either to apply for a temporary resident permit. These can be granted by IRCC in exceptional circumstances.

While all of the ordinary application fees related to visas have been waived, applicants still have to provide their biometrics (fingerprints and a picture of themselves). The maintaining of this requirement is a move by IRCC that has come under fire for its alleged impracticality. Critics have remarked that in such a difficult and panicked situation as mass flight from a war-torn country, relying on potential CUAET applicants to gather the necessary documentation and make their way to a visa application centre to provide their biometrics might be an “unrealistic” expectation. Notably, the NDP and Bloc Québécois political parties in the federal Parliament have suggested that important documentation like biometrics and vetting should occur once refugees are safely on Canadian soil, as opposed to being done abroad.

This is completely understandable considering many Ukrainians had to leave in a sudden hurry at the outset of the Russian invasion, going through the immense pain of leaving their homes behind, and then had to undertake the arduous journey to safety (and visa application centres) through neighbouring countries. Refugees struggling to enter—or at worse, being turned away from Canada—for the sake of documentation issues would likely sit poorly with Canadians.

Indeed, a recent poll indicates that a vast majority of Canadians supports allowing an unlimited number of Ukrainian refugees into Canada. The poll’s sample size is relatively small, but it would be unsurprising to find the existence of this majority within the broader Canadian population. Communities across the nation are already readying themselves for the arrival of Ukrainian refugees, from British Columbia, to Ontario and Québec, to Nova Scotia. In a kind of full circle moment, Syrian-Canadians in Manitoba, who came to Canada as refugees themselves only a few years ago, have expressed their solidarity with Ukrainians and are welcoming them with open arms.

Criticisms of the CUAET are not meant to trivialize or oversimplify the complexity of the immigration and refugee process, or of IRCC’s job. Weighing and evaluating many factors, from humanitarian concerns to national security interests, is a necessary part of regulating immigration to Canada. However, looking at IRCC’s stance on biometrics alongside its insistence that “[t]he CUAET is a temporary residence pathway and is not a refugee stream” seems a bit at odds with the very open and welcoming approach the government of Canada has been previously espousing about the Ukrainian war.

Interestingly, the aforementioned IRCC news release is careful never to say the word “refugee” except in the passage cited above, instead opting to say “those fleeing the war in Ukraine” or “Ukrainians seeking safe haven in Canada.” The Cambridge Dictionary defines “refugee” as “a person who has escaped from their own country for political, religious, or economic reasons or because of a war.” The term seems to be the obvious one to use when describing the situation in which Ukrainian citizens currently find themselves, begging the question of why IRCC is not using it.

This may unfortunately be for reasons of political appearances, potentially linking back to a 2017 tweet by Prime Minister Justin Trudeau, in which he stated:

“To those fleeing persecution, terror & war, Canadians will welcome you, regardless of your faith. Diversity is our strength #WelcomeToCanada”

While the tweet itself obviously does not say “refugee” explicitly, its timing in the wake of former President Donald Trump’s refugee suspension and Middle East-focused immigration bans (aptly nicknamed the “Muslim bans”) was seen by many as an open, unfettered invitation to refugees. In its aftermath the tweet was heavily criticized, notably by former Conservative Party leader Andrew Scheer, who stated: “The problem is that that damages the integrity of our immigration system and people who are trying to come to Canada the right way are now having to wait longer.”

Anti-refugee and anti-immigration rhetoric has found itself emboldened by and since the Trump administration, a problem that has leaked into Canada and that might have resulted in IRCC wanting to maintain as much perceived legitimacy as possible from a national security perspective by continuing to require biometrics when other countries have waived the requirement.

Indeed, Ukrainians can currently enter Moldova, Romania, Hungary, Poland, and Slovakia without paperwork. As for the rest of the European Union, it has been implementing the Temporary Protection Directive ever since the European Commission unanimously activated it on March 3rd. Under this Directive, member nations are obligated to make concessions when it comes to “refugees and displaced persons” and many have begun doing so with far more relaxed requirements than Canada’s.

Ultimately, the government of Canada’s professed willingness to take in an unlimited number of Ukrainian refugees is laudable, but as a country that prides itself on coming to the aid of its international allies, the pressure to do more to help will likely remain as long as the current crisis does.

According to the UN High Commissioner for Refugees, over 3.3 million people have left Ukraine since the beginning of Russian President Vladimir Putin’s invasion on February 24th.