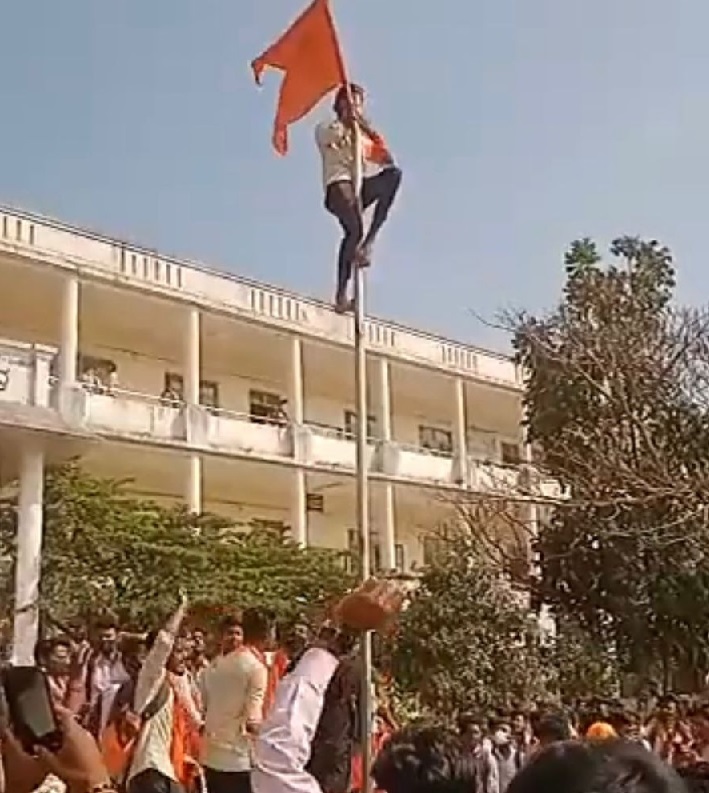 India Staff Correspondent Sambhav Sharma reports on a prohibition against Indian Muslim school girls wearing hijabs at a state-run school in Karnataka State that has prompted litigation and now violence in a country gripped by a rising tide of Hindu nationalism.  He files this for JURIST from New Delhi.

The High Court of Karnataka is currently hearing a petition over the ‘hijab row’ that has engulfed the state. There have been several developments today, Tuesday. The Chief Minister of Karnataka, Basavaraj Bommai has ordered closure of all schools and colleges for the next three days in the state and in the city of Shivamogga a prohibitory order under Section 144 of the Criminal Procedure Code (Cr.P.C.) has been issued, following local incidents of violence and stone-pelting.

The entire dispute began on 1 January, and has now evolved into a state-wide altercation with national ramifications. It started when female Muslim students were denied entry in PU College, a state run educational institution, for wearing a hijab (headscarf) in the classrooms. Allegedly, the principal of the college did not allow students to wear a hijab and compelled them to adhere to a uniform dress code. Eventually, protests started on both sides when Muslim girls questioned the arbitrary and unfair rule that prohibited them from practicing their freedom of expression. On the other hand, a group of students in Karnataka’s Koppa district dressed themselves in saffron scarves to protest the entry of Muslim girls wearing a hijab inside the college. It is imperative to note here that the saffron colour is generally representative of Hindu religious identity. However, it is also used symbolically by various fringe elements that are self-declared protectors of the Hindu religion. The ruling party in the State of Karnataka is the Bhartiya Janata Party (BJP), which many allege has an inclination towards Hindu nationalism.

On 26 January, amid protests from students and discourse which had by then spread all over the state, the Karnataka government set up an expert committee to resolve the issue. In the meanwhile, it was announced that all girls should adhere to the established dress/uniform code. On 31 January, a writ petition was filed in the Supreme Court of India seeking a declaration that wearing a hijab was as a fundamental right, pursuant to Article 25 of the Indian Constitution, which establishes freedom of conscience and free profession, practice and propagation of religion as a fundamental right. On 5 February, taking cognizance of the rising turmoil in the state, the government held a meeting with the Education Minister and others to address the concerns and the government’s stance on the issue.

Today, the Karnataka High Court heard the matter. Devdutt Kamat, Senior Advocate representing the Petitioner, submitted that while some countries practice negative secularism, i.e. prohibition of display of any religious affiliation in public, India follows “positive secularism”, which implies a more inclusive governance where everyone has a right to express their religious affiliations. The Court opined that while there are a lot of emotions involved, the judiciary functions according to law, and will only decide as per the principles enshrined in the Constitution.

Interestingly, while the debate is on secularism, Hon’ble Justice Krishna Dixit commented that “Constitution is the Bhagavad Gita for me; I have taken the oath to abide by Constitution.” (Bhagavad Gita is the most holy scripture in Hinduism). This reflects the secular fabric of the nation. A Hindu judge is free to express his religious inclinations in court and has a right to do so, as long as he delivers justice. Similarly, there must be an equal right of the citizens to practice their religion, in whatever ways, be it in terms of appearance or otherwise, as long as it does not prejudice the interests of others.

The Court, while appealing to the students to maintain peace and not keep the issue unnecessarily burning, asked them to have faith in the constitution, and listed the matter for tomorrow, Wednesday. However, a few hours ago, incidents of violence broke out in various districts of Karnataka. A video has now surfaced that shows a person in the city of Shivmogga climbing up a pole and hoisting a saffron flag in place of the National Flag. The atmosphere has turned so violent that the Karnataka Congress President DK Shivakumar tweeted:

“The situation in some Karnataka educational institutions has gone so out of hand that in one case the National flag was replaced by a saffron flag. I think the affected institutions should be closed for a week to restore law and order. Teaching can continue online.”

Similar incidents of violence have been reported elsewhere today, where a video can be seen of a Muslim student wearing a hijab being harassed by persons waving saffron flags and cloths while shouting “Jai Shri Ram” (“Praise Lord Ram”, who is a Hindu deity). Another video shows men wearing saffron turbans intimidating and cornering a person wearing a hijab. It is also evident that these protestors in saffron are being aided by influential entities that are attempting to aggravate the violence by instigation. The fact that everyone hounding Muslim students in a hijab seems to be wearing identical saffron props hints at a larger conspiracy. A video can also be seen where saffron turbans and scarves are discreetly being distributed to the resentful men, almost as if it were a uniform to fight against the Muslims. The situation has worsened so much that in order to stop stone pelting by protestors, the authorities were forced to charged them with sticks and impose preventive measures under Section 144 Cr.P.C.

It is absolutely appalling that an incident turning into widespread communal violence emanated from an educational institution that is run by the state. It is shameful that the ‘culprit’ was a student who came to college to study. It is horrifying that the alleged ‘wrongdoing’ was her refusal to let go of her religious identity. And it is downright disgusting that she was denied entrance and education by a teacher. I feel that the current political climate in India is so hostile that it has begun to mimic a monarchy, where the despot makes the rules and the dissenters are punished. The biggest problem with this is that the despot is the government elected by the people being bullied and the dissenters are citizens fighting for their rights, guaranteed by the Constitution.