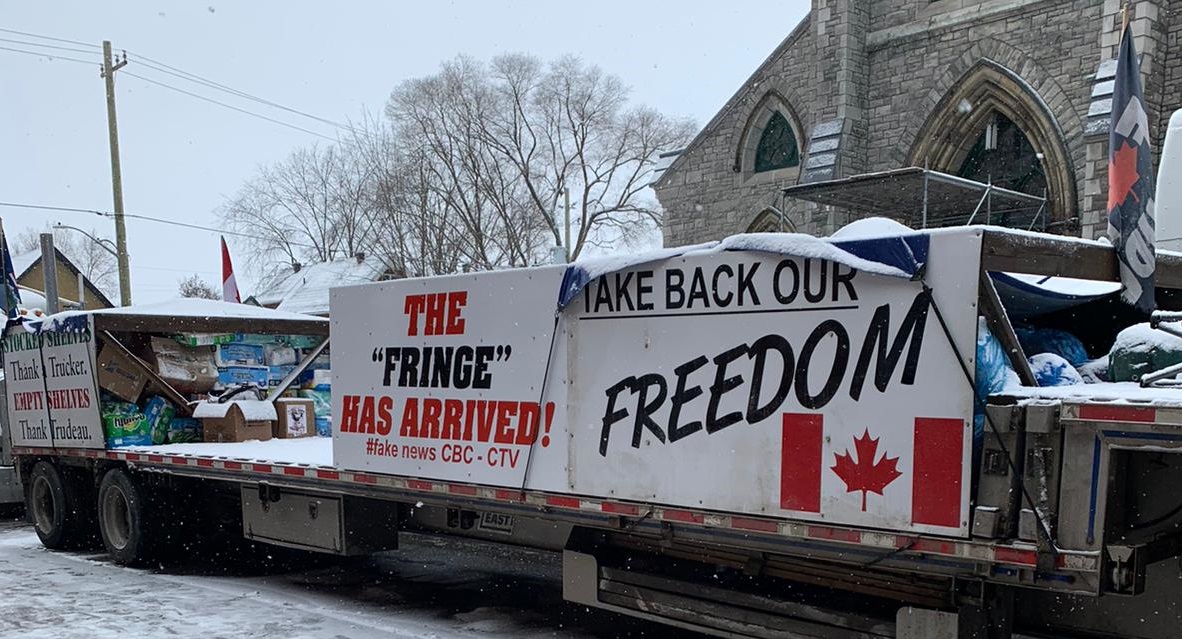 Law students from the University of Ottawa are filing dispatches for JURIST on the “Freedom Convoy” protest in Canada’s capital that has paralyzed the city for over a week. Here, 1L Mélanie Cantin reports.

Many things struck me when I walked through the Freedom Convoy encampments on Saturday morning and early afternoon with fellow Ottawa JURIST correspondent Andrew Warkentin. Everything from the organization of food and shelter for protesters, to the celebratory mood and noise that seemed to permeate every blocked street we walked down was astounding.

Most notable, however, was the wide range of opinions and motives present among the protesters themselves. Given how parts of downtown have remained completely gridlocked since January 27th, one might expect to see great uniformity among the Convoy demonstrators—after all, it can be difficult to maintain energy and momentum for a cause whose goals or values most people cannot even agree on. However, general frustrations with Trudeau, the government, and COVID-19 restrictions seemed to be the main (and only) strings that tied together the various protesters we spoke to throughout the downtown area. Aside from that, there was little uniformity in their views.

The Freedom Convoy originally started making its way to Ottawa to protest recent changes in vaccination requirements for Canadian truckers crossing the border to the United States. Far-right demonstrators allegedly joined the fray along the way and “hijacked” the protest, although with known white supremacist Patrick King and Maverick Party secretary Tamara Lich as major Convoy organizers, it is difficult to believe that such elements not part of the movement from the outset.

The Convoy has now been in Ottawa for nearly two and a half weeks. JURIST wanted to get a better idea of why demonstrators have continued camping in the city streets amid the risk of health issues from overexposure to diesel fumes and rapidly declining temperatures, including a recent frostbite warning.

Our first encounter was with Kyle, an Ottawa resident who was originally from Toronto. He was carrying a five-foot tall wooden cross along Wellington Street just past the Supreme Court to the sound of cheers from fellow protesters, and appeared to be heading towards Parliament Hill. He said he had shown up last week and this Saturday with religious motivations to warn people of an impending threat.

“There is a plan to destroy all sovereign nation-states and bring them together into a one-world government […] We know that the anti-Christ is going to reign over this government,” he stated. When asked by about COVID mandates, Kyle responded, “Nobody trusts Trudeau, but I mean, we don’t trust the Conservatives either. […] They all seem to be on the same side. Ultimately, the same agenda goes forward no matter who we elect, and I think this is why the movement is so powerful and why it’s being felt around the world, because we know that it’s—the global powers have been taken over by Satan.”

This was a vastly different sentiment from that of the very next protester we spoke to only moments later, a snow removal worker named Anthony who has been going “back and forth” between Montreal and Ottawa to show his support. He stated that he decided to come when he heard that the Children’s Aid Society was receiving ongoing reports about child welfare in the protest zone. Contrary to Kyle, however, Anthony sees promise in Conservative Party interim leader Candice Bergen. “She’s got a very good voice, she’s representing everybody. […] I’ve seen her in action, I’ve seen her speak, and that’s who we should have representing us,” he stated. Anthony also expressed that if he had not witnessed “so many people have bad reactions,” he would have gotten the COVID vaccine.

Another protester, Abram, had arrived on January 27th from Québec City. For him, the Convoy had little significance on a political level, but was an opportunity to “understand each other and have good conversations” in light of what he perceives to be diminishing freedom of expression in Canada. “There’s a lot of diversity here, that was my biggest thing, I like to just express myself freely and I felt like that was slowly just getting harder and harder to do,” Abram said. He claimed that medical mandates were to blame for the alleged erosion of his Charter-backed freedom of expression.

Mistrust of the vaccine was a recurring theme among protesters, specifically skepticism about its quick development. Comprehensive evidence to the contrary seems to be no match for individual stories of family members and friends experiencing extreme reactions to the COVID-19 vaccines. This is unsurprising, as misinformation runs rampant among the Ottawa crowds. For instance, we ran into a protester who held a sign with a link to a website called brighteon.com, and recommended that we check out the videos by the Canadian COVID Care Alliance (CCCA) to get “the truth on the vaccines.”

Searching revealed that brighteon.com is a “right-wing conspiracy and pseudoscience video-sharing website” founded by Mike Adams, an anti-vaxxer and HIV-AIDS denier who also founded the heavily discredited Natural News and a number of other medical misinformation websites. The many videos on brighteon.com by the CCCA spread false information on the Pfizer vaccine. The CCCA itself is known for “promoting unproven COVID-19 treatments, such as ivermectin and hydroxychloroquine” and is led by a doctor who is currently being investigated by the College of Physicians and Surgeons of Ontario.

Amid the various accounts we collected, it remains difficult to ascertain how many people who are in Ottawa are anti-vax, anti-lockdown, anti-government, or anti- a vast slew of other possible things. The motives of the protesters are wide-ranging and somewhat disjointed from one another, but frustration against government currently seems to be binding them all together. As both time and weather fluctuate in the coming days and weeks, it will be interesting to see who leaves Ottawa and who stays.