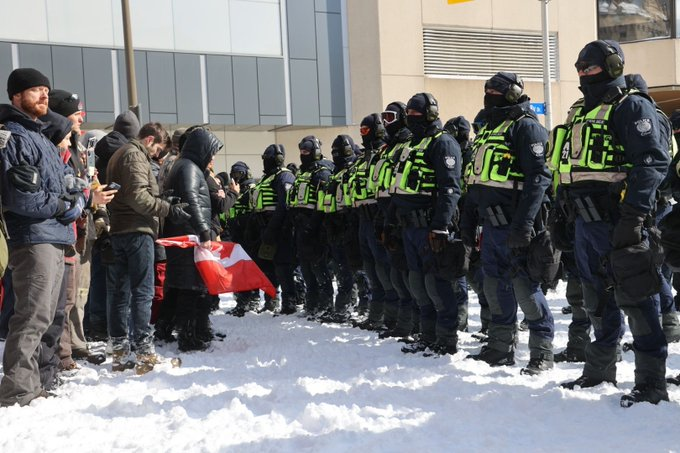 Law students from the University of Ottawa are filing dispatches for JURIST on the “Freedom Convoy” protest in Canada’s capital that has paralyzed the city for some three weeks. Here,  3L Andrew Warkentin reports.

I could sense that there was something odd in the air from the moment I woke up this morning. Living just off King Edward Avenue in Ottawa, the road is usually busy as people are trying to make their way to work, especially since the Freedom Convoy’s occupation of Ottawa’s downtown core has caused many to use alternative routes. But today was different. It was eerily quiet.

As I got moving, a news alert on my phone said that the Canadian House of Commons and Senate were not going to sit today, even though they had planned a full day of debate focused on the recently invoked Emergencies Act. A statement was soon issued by the Speaker of the House of Commons, the Honourable Anthony Rota,  that this was due to “a police operation” that was expected to take place in the areas around Parliament in the coming hours.

Moments later that it was reported that police had begun to mobilize en masse near the Rideau Centre towards the Byward Market and Nicholas Street near the University of Ottawa. Police then gave notice that protesters had to leave the secured area with their vehicle or property as their protest was now being declared unlawful. Protesters who did not comply faced arrest or having their vehicle impounded.

The reaction from protesters was swift as they initially rushed to their front lines to show they were still dug in and committed to staying. Some scrambled to erect barriers using whatever means they could, at choke points near Nicholas Street, Elgin Street, and near Parliament, with whatever means they could. Some of these barriers involved the re-positioning of trucks in order to fashion choke-points that would prevent police access. Others took the more futile route of attempting to pile up snow from the previous night’s heavy snowfall into makeshift barriers.

Despite this reaction by some, other protesters remained resolute in their beliefs that the police would not dare attempt to try to force them out of their encampments. Numerous rumors began to circulate through the day ranging from a belief that if protestors sat down in the middle of the street they would be arrested, to a wild statement by protest organizer Pat King that protesters should fashion white flags using their underwear or t-shirts because police “cannot touch you if you are holding a white flag. That is international law.” Some even went so far as to believe that the police would even join their ranks once they reached the protest zone.

Police did not waiver in any regard, and slowly began pushing protesters from the east end of the protest zone while leaving the west end towards Bay Street open for protesters to leave without arrest. A few demonstrators were initially arrested near Nicholas Street while police advances towards the Byward Market proceeded without incident.

These advances proceeded relatively uninterrupted until two prongs of advancing police met at the corner of Nicholas Street and Laurier Avenue. A number of trucks and protesters had been camped out at this intersection since the protest started.  At this point, police initially held their ground and broadcast repeated messages pleading with protesters to leave the area or face arrest. Liaison officers were also seen talking to anyone with apparent authority over protesters to demand they vacate the area.  Despite these requests, protesters remained and police patience wore out. Slowly, police began to advance into the intersection with chants of “move back” being sternly issued.

Protesters then began to deploy tactics to make themselves appear as if they had some form of moral high ground. Some linked arms and began singing the national anthem. Others simply sat down and remained in place. A bouncy castle was even briefly inflated in front of Parliament, and a minor was jumping on it for a brief period.

Other tactics were less than noble, if not downright cowardly. This involved acts by protesters to begin flooding 911 and non-emergency lines in an attempt to disrupt the police response to the blockades. Reports by police also stated that some protesters were using children as human shields to protect them from advancing police.

Once children were removed, police advanced into the intersection and began to push the protesters back and arresting those who chose to fight back or refused to disperse. At one point, a protester locked himself in his car and refused to get out. Police proceeded to then smash at least 2 of the car’s windows and demand the driver exit the vehicle.

Soon after, the 2 police prongs met and began pushing further west towards Parliament. At this point, by this time late aftrenoon, interim Ottawa Police Chief Steve Bell provided an update to the public and media regarding the events that had transpired. Bell said that the police were approaching the situation slowly and methodically, with every chance given to protesters to leave the area. By this point in the afternoon, about 3 p.m. EST, 70 people had been arrested for various offences. A majority of these offences were said to be mischief or conspiracy to commit mischief which may carry a prison sentence between 2-10 years depending on the offence.

Police also confirmed that although children were present within the protest zone during the police operation, none had been placed in the care of the Children’s Aid Society.

They also confirmed that a number of organizers with the Freedom Convoy had been arrested and charged with various crimes the night before. These included prominent figures in the protest zone such as Chris Barber and Tamara Lich. Pat King was also arrested today.

The mood of the protest and response changed shortly after 5 p.m, however. This was possibly in response to a report by the Ottawa Police that protesters had assaulted an undisclosed number of officers and tried to relieve them of their weapons while another had thrown a bicycle at the feet of a horse that was being used for crowd control. These events appear to have caused police to take a more aggressive stance for a period which saw police armed with batons and face shields replace regular officers and mounted police taking a more frontline stance.

This aggression soon subsided and has led to the position which protesters hold located on Wellington Street between the Chateau Laurier and the Senate Building. Police have held this position since, and have erected fencing to hold the protesters at bay for the time being.

Despite the police holding position, some protestors continued to leave the protest zone. A number of trucks, trailers, and other vehicles were seen leaving the protest at night time. However, these exiting protesters did not get away scot-free as police stopped each vehicle before leaving the protest zone. This seems to indicate that they may be recording information such as license plate numbers and registered owners in order to prosecute or fine those involved at a later date for various offences.

At the time of the writing of this report, Ottawa Police say they have arrested over 100 protesters and have towed 21 vehicles.