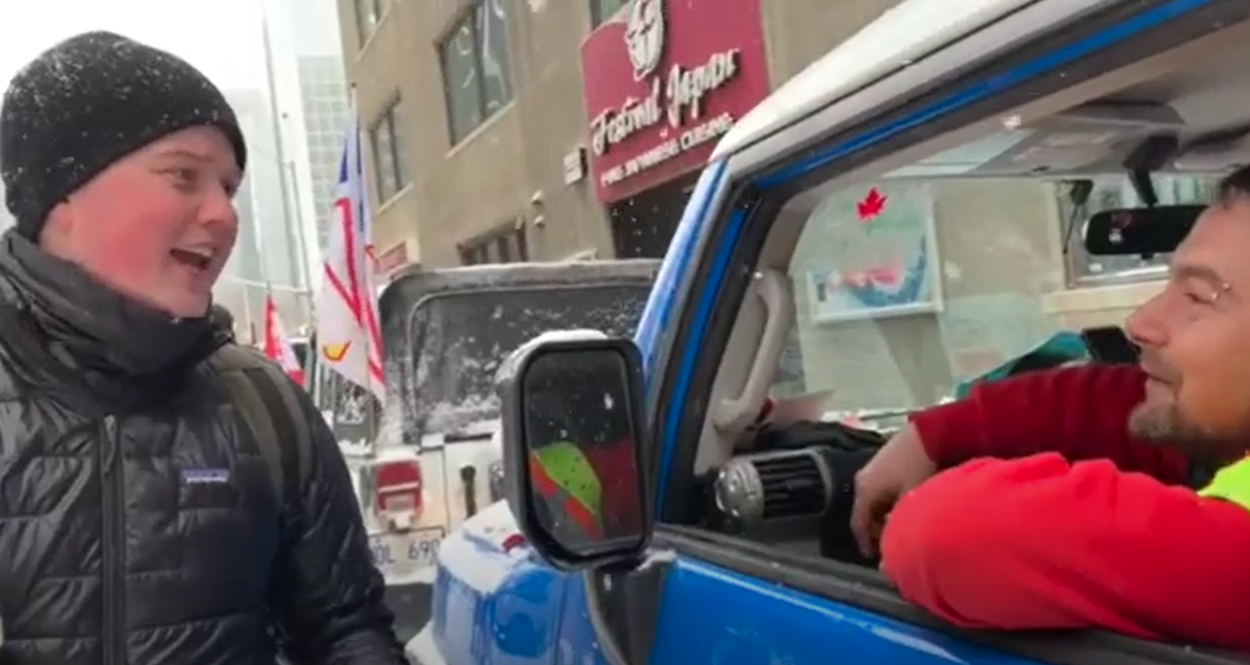 Law students from the University of Ottawa are filing dispatches for JURIST on the “Freedom Convoy” protest in Canada’s capital that has paralyzed the city for over a week. Here, 3L Andrew Warkentin reports. He and 1L Mélanie Cantin went into the protest zone in downtown Ottawa Saturday to talk to protesters.

Despite an extreme cold warning in force for the Ottawa area, anti-mandate protesters with the “Freedom Convoy” remained in place Saturday.

Overall, protesters seem determined to stay, but when JURIST was in the protest zone Saturday, it also seemed that their numbers had dropped slightly. Earlier this week Ontario MPP Randy Hillier’s promised weekend reinforcements in the form of a “Blue Collar Convoy.” Those were expected to arrive Sunday morning, just in time to aggravate Convoy-weary local residents and police.

From our position on the streets in the downtown core, it seemed that attempts by police to control the flow of fuel into the area had been futile, if not totally ignored. We saw many protestors carrying jerry cans, sometimes by the cart full, into the red-zone without being stopped by police.

This indicates that despite police efforts to seize the convoys fuel stocks last weekend, fuel is still making it to protesters in the downtown core. This has allowed protesters to continue to run their trucks, generators, and other equipment in a way that is contributing to a growing concerns over air quality in the area.

JURIST also observed a number of protesters openly defying the interlocutory injunction currently in place prohibiting the use of horns in the City of Ottawa. However, many of the protesters seemed unphased by the order or the heavy police presence in the area. One protester even went so far as place a toilet in an intersection with a sign above it reading “Attn. Police: Place all Tickets Here” with an arrow pointed downward.

JURIST talked with several protesters in order to gain a sense of why they came and their thoughts on a number of issues that the protest has raised.

One of these individuals, Abram, had come to Ottawa from Quebec City, and has been living in his van since the beginning of the protest. “To have it [the vaccine] come out so quickly and at such a rapid rate…and to do it so quickly I didn’t feel good about it. I just don’t like being told what I should be doing with my body.”

Another protester named Chris who came to Ottawa from Toronto cited a number of reasons for protesting. “Our Charter rights and freedoms have been completely ignored. Our freedoms; the freedom to choose, freedom to worship, freedom to put whatever in our bodies is our god given right,” said Chris.

When asked about his thoughts on whether the restrictive measures were justified by the Charter’s Section 1, however, Chris did not know what the provision. For those unfamiliar with Canadian constitutional law, Section 1 of the Charter guarantees our rights and freedoms, but can be limited so long as the limits are prescribed by law and are justified in a free and democratic society. Courts have commented at great length on what “justified in a free and democratic society” is in a number of high-profile cases, beginning in the 1980’s with R v Oakes [1986 1 SCR 103].

When I explained this section, Chris responded by stating that he believed “the pandemic is essentially over” and that the current emergency orders had been extended without reason.

Chris highlights the general attitudes JURIST felt most protesters have; that our rights and freedoms under the Charter are absolute and cannot be violated to the slightest. Many had obtained copies of the Charter and the Bill of Rights and had them affixed to various signs as justification for their cause.