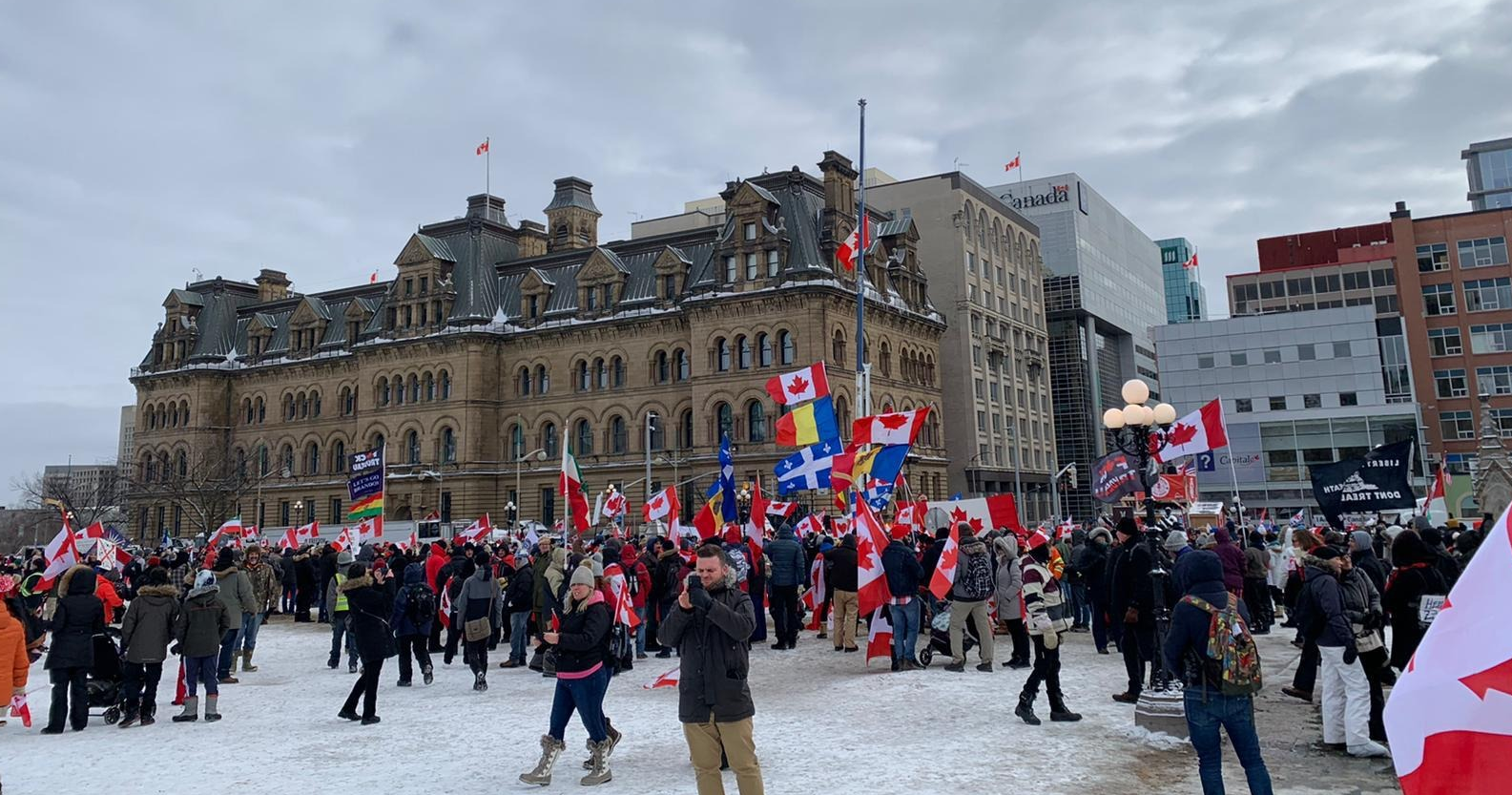 Law students from the University of Ottawa are filing dispatches for JURIST on the “Freedom Convoy” protest in Canada’s capital that has paralyzed the city for some three weeks. Here, 1L Mélanie Cantin reports.

The Confederate flag and Nazi swastika were spotted on the first weekend the Freedom Convoy arrived in Ottawa, but casual onlookers since might be forgiven for thinking that hate symbols have disappeared from the downtown crowd. When the swastika in particular was first spotted, many Convoy supporters rushed to insist that this blatant showing of white supremacy and antisemitism was an isolated hate incident that did not represent the views of the majority of those who supported the protest.

But a number of other flags and banners bearing lesser-known insignias have remained or since popped up in the nearly three weeks since the Convoy’s arrival in Ottawa. Some of these seem to be fairly innocuous: strange symbols, perhaps, meant to send a creative message. Yet close examination of the meanings behind many of the flags and symbols employed so far reveals an unsettling truth: that far-right extremism continues to be a core part of the movement currently occupying Canada’s capital.

Some of these are relatively self-explanatory, such as the Trump 2024 flag, the numerous Fuck Trudeau flags, and the People’s Party of Canada banners. Others, however, are more obscure, and their associations to the Convoy are perhaps inexplicable at first glance. The following is a list of symbols (with linked pictures) that have been spotted at the Ottawa protest, along with information as to their origins and meanings, and why they might be in Ottawa at all.

According to Canadian Heritage rules, the national flag should never “be flown upside down (except as a signal of distress in instances of extreme danger to life).”  When flown upside-down outside of an explicitly political context like a protest, it is meant as a distress signal. Its increased use at protests is generally meant as an anti-government political statement, and sometimes specifically to express opposition to a country’s foreign policy approach while reaffirming national pride.

In the United States, upside-down flags have appeared at a number of protests. However, the presence in Ottawa of such a display comes as a surprise in light of the fact that Canadians are not known to be “fervent flag wavers” in the first place. The ever-present cries of “freedom!” among the crowd of supporters along with the hundreds of right-side-up Canadian flags clearly show that Convoy participants view themselves as patriots, but the upside-down flags send a darker, if somewhat hazy message about the perceived state of affairs in Canada. Convoy protesters are likely trying to express both distress and dissent at the perceiving curtailing of their Charter freedoms under COVID-19 restrictions and under the Trudeau administration more generally.

Additionally, considering the ties of many Convoy organizers and participating subgroups to white nationalism, the upside-down flag may be meant as a statement opposing the kind of increased immigration and multiculturalism that has characterized Trudeau’s government.

Non-Canadian national flags (including those of the United States, Romania, and Bolivia)

The American flags seen in mass numbers at the various Convoy protests around Canada, including in Ottawa, have baffled many, despite being obviously outnumbered by Canadian flags. Their presence may be related to the common right-wing conception that the United States is freer than Canada, or that Canada should follow in the footsteps of America in some way. With the galvanization of the American right throughout the Donald Trump administration, this kind of sentiment in Canada—further underlined by the presence of pro-Trump flags—is not entirely surprising.

As for the Romanian flag, when considered in light of a sign in front of Parliament likening Trudeau to former communist dictator Nicolae Ceaușescu, its presence at the protest may be intended as a celebration of freedom from dictatorship and opposition to communism and harsh state regulation. Comparisons between Trudeau and Ceaușescu have been drawn in a Romanian paper as well as on social media. Anti-communist sentiment may be behind the waving of the Bolivian flag as well, since Bolivia was a socialist nation before the 1971 coup d’état that killed dictator Juan José Torres. These flags might also simply be used to send the message that supporters of the Convoy hail from various nationalities and ethnicities.

This political slogan initially emerged in 2021 after a reporter mistakenly thought he heard people chanting it at an event, when in reality they had been chanting “Fuck Joe Biden” repeatedly. The phrase quickly became a meme, then a semi-genuine political statement. It is generally taken to tacitly endorse Trump; this is evident from its popularity among staunch Republicans and the way signs and flags containing the slogan tend to follow similar colour schemes as the classic Trump election signage. “Let’s Go Brandon” also seems to have particular significance in terms of expressing displeasure about COVID-19 restrictions and the overall handling of the pandemic by Joe Biden.

Originally invented by American revolutionary Christopher Gadsden as an anti-British symbol, the popular yellow flag featuring a coiled snake and the slogan “Don’t Tread on Me” has since taken on various meanings. More recently, the flag has become popular with those holding anti-establishment, libertarian, white nationalist, and far-right political views, making its presence at an anti-government protest fraught with other far-right symbols relatively unsurprising.

Like with the Gadsden, the initial meaning behind the Australian Eureka flag has been appropriated by a number of different groups. At first, it seems to have been a general symbol of protest, working-class resistance, and democracy harkening back to the mining rebellions of the early 1850s. It has since been claimed by Australian nationalists, left-wing union groups, and right-wing movements alike.

Most recently, however, the 2016 adoption of the Eureka flag as part of the official logo for the Australia First Party has led many to associate it with white supremacy and anti-multiculturalism in line with the party’s far-right platform and ties to neo-Nazism.

The black circle bisected by a red line on a white background is the symbol of The Line Canada, “a national movement of resistance created by the people to end oppression and tyranny” in relation to lockdowns and other COVID-19 restrictions. They have been active at both anti-lockdown and anti-mask protests since at least August 2020 and have partnered with the organization Unified North to allegedly write a new draft constitution for Canada. The Line Canada’s founder Lamont Daigle has expressed his approval for aspects of the international Jewish conspiracy[1] though the movement itself does not seem to espouse antisemitic rhetoric. The Line Canada is also known to post COVID-related conspiracy theories on its socials, such as vaccine misinformation.

This symbol denotes the pro-police Blue Lives Matter movement, which is widely considered to have arisen in response to the Black Lives Matter movement against police brutality and racial injustice. A group of police officers created the countermovement in 2014 after the murder of two New York Police Department officers, which were seemingly themselves motivated by revenge for the murder of Eric Garner by an NYPD police officer. The presence of a pro-police at the Convoy protest symbol is interesting in light of the contempt many demonstrators have had for the police officers handling the protest. On the other hand, the Convoy’s organizers have also spoken positively about their individual, day-to-day relationships with the Ottawa Police Service

[1] For more information on this conspiracy theory, see Thomas Milan Konda, “4 – The International Jewish Conspiracy and the Secret Government” in Conspiracies of Conspiracies: How Delusions Have Overrun America (University of Chicago Press, 2020).