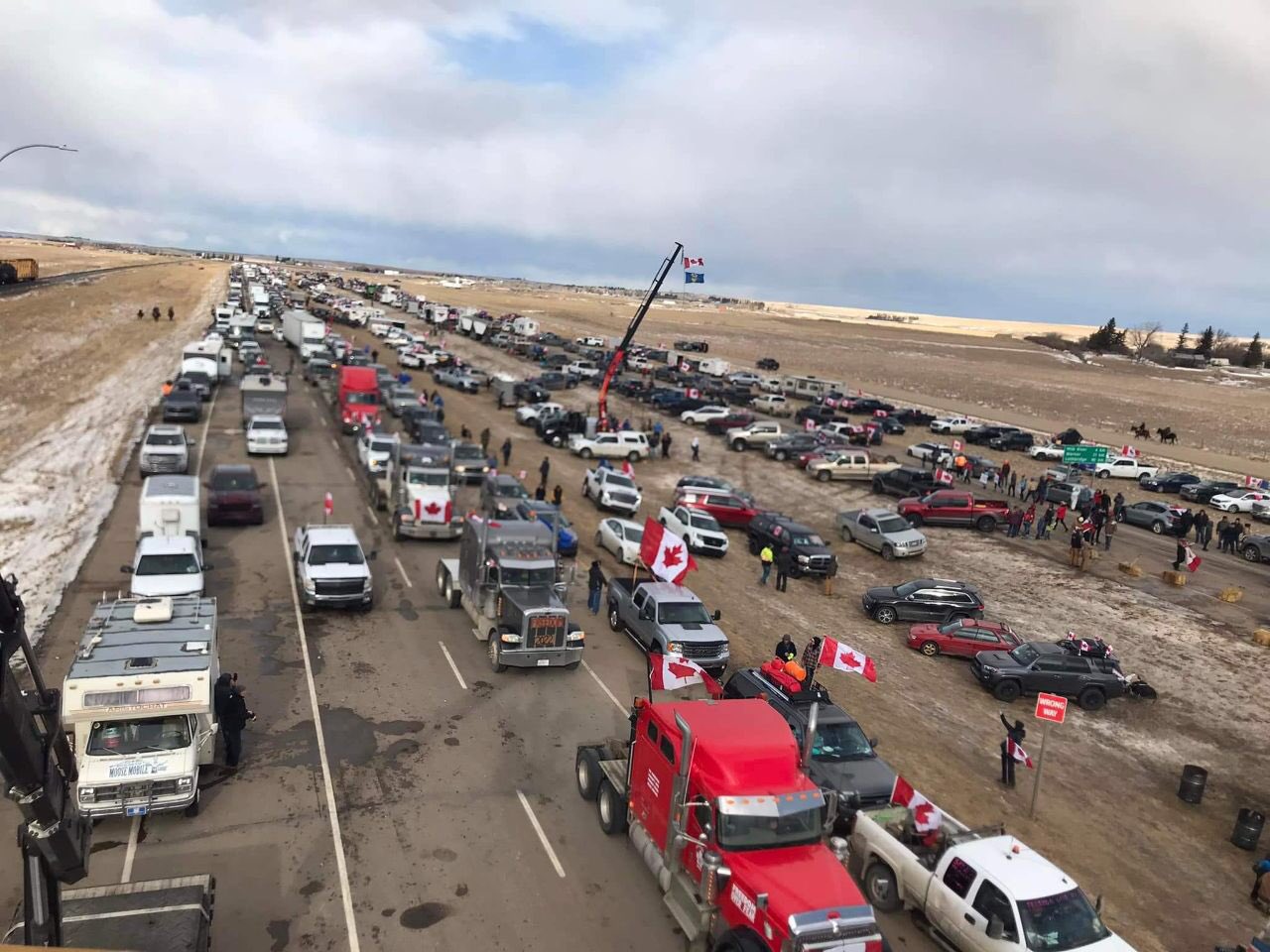 Ian Profiri is JURIST’s Chief Correspondent for Canada. He files this dispatch from Calgary.

The Coutts Blockade remains, despite the government of Alberta loosening restrictions related to the Covid-19 pandemic. Now, blockade protestors are saying they will remain until all restrictions are gone, and Justin Trudeau is no longer Prime Minister of Canada.

“We’re here for the big picture” says John Vanreeuwyk, a feedlot operator and protestor supporting the blockade, “[it] started with the border thing, it started with Trudeau, and until Trudeau moves, we don’t move.”

The Coutts blockade began as a solidarity protest with the Ottawa protests against vaccine mandates and various other “Freedom Convoy” protests that have been angering communities and local businesses across Canada over the past couple weeks. It is estimated that the Coutts blockade itself costs the Alberta government around $44 million a day, and the cumulative effect on Albertan businesses, effects that may take months to dissipate, could be extreme.

On Tuesday, RCMP Deputy Chief Curtis Zablocki told reports that police are actively working to diffuse the blockade, but are attempting to do so peacefully. Acting Justice Minister and Solicitor General for Alberta Sonya Savage said the “Alberta government will always respect Albertans . . . right to peacefully protest, so long as they respect the rule of law.” Savage followed by stating that she believes the Coutts blockade “has crossed [the] line” from peaceful to disruptive, and that “[the convoy] needs to end.”

Zablocki went on to say “make no mistake, there are illegal activities taking place at these protest sites that violate both the Criminal Code and provincial laws.” The provincial laws that the Coutts protestors have potentially violated include violations of the provincial Traffic Safety Act and the controversial Critical Infrastructure Defence Act (CIDA); both allow for significant fines and jail time.

There has been much criticism directed towards the RCMP and other police forces for their apparent leniency towards the Coutts protestors, especially when compared to previous responses to environmentalists, houseless encampments, and Indigenous rights protestors.

Athabasca Chipewyan First Nation released a statement Tuesday describing the apparent discrepancies. The letter noted that if “this blockade was being organized by Indigenous people, [members of the Indigenous community] have no doubt that authorities would respond quickly to remove the blockade and utilize the law as it has been created to do so.”

Alberta Premier Jason Kenny responded to this statement Wednesday morning on Global’s Shayne Ganam show, calling the comparison “inaccurate.” When asked about allegations that law enforcement handles different groups differently, Kenny responded that he “doesn’t like it one bit.” CIDA, the main source of comparative discrepancies, has a controversial past, and was largely criticized for being a politically created Bill, as opposed to a necessary regulatory piece of legislation. It prevents, as one of its components, blocking “critical infrastructure” such as highways. CIDA has not yet been used or challenged in court; many expect it would fail a constitutional challenge.

Alberta was not the first province to recede some of its mandates; fellow prairie province Saskatchewan preceded Kenny’s government in removing provincial requirements related to Covid-19.

Saskatchewan Premier Scott Moe announced Tuesday that all Covid-19 related mandates would be removed within the province as of Monday, February 14. Moe stated that the “benefits of proof of vaccinations no longer outweigh the costs,” and that “it is time for [Saskatchewan] to heal the divisions in our communities over vaccination.” Moe had previously commented that vaccine mandates create “two classes of citizens” in Canada.

Moe made the statements while Saskatchewan hospitals continue to strain under the largest caseload the province has seen.

Kenny announced at his press conference that the Alberta government would be following Saskatchewan’s path, removing requirements for businesses to follow the provinces Restriction Exemption Program (REP), effective that night at midnight. Kenny also announced that children under the age of 12, and children attending class at schools across the province, would no longer be required to wear a mask as of Monday.

The swiftness of the lifting of the REP sent businesses and municipalities into confusion. Many businesses in Edmonton and Calgary continued to follow the REP requirements on Wednesday; some lamented that the lifting of restriction did not go far enough, and all wondered what data the Kenny government was relying on for their decision. Kenny, at the conference, was asked about the effect that the ending of the REP may have on businesses that chose, or chose not to, follow safety measures. Kenny responded that Albertans and Alberta businesses should respect “the free market” and let the process determine the “proper course of action.”

Kenny was asked what affected his government’s seemingly quick decision. In a rambling answer, he mentioned the mental health effects on children and the divisiveness that mandates had allegedly caused in the province. He ended the rant by stating the treatment of the unvaccinated by vaccinated people was comparable to the treatment of AIDS victims in the 80s.

The statement was met with aggressive rebukes from local MLAs and MPs. The statement is especially problematic considering Kenny’s previous advocacy for barring the homosexual partners of AIDS victims from attending the funerals of those who had passed away. Kenny later tweeted an apology over his statement.

Both Premiers relied heavily on international examples to fortify their positions. Nations such as Denmark, Sweden, and the UK were all cited as examples as “the path forward.” Denmark was one of the first European nations to scrap most pandemic restrictions, saying that Covid-19 was no longer “a socially critical disease.” The reason for this appears to be that, while Denmark is currently suffering from the worst outbreak the nation has seen, their healthcare system is bolstered enough to withstand the extra load. The situation is similar in Sweden and England.

This, however, raises the obvious comparisons between these nations and the Prairie Provinces, and the comparisons are not promising. While Kenny cited these countries as inspirations to follow, he also criticized the Federal government for underfunding or otherwise not supporting the pieces of the provincial healthcare system. Kenny’s government previously failed to access over $300 million in federal funding meant for Covid-19 pandemic relief, and previously admonished the provincial nurses’ union for attempting to negotiate for higher wages during an outbreak.

What is more distressing for those of us that live here is that our hospitals are still over-full, and now face the risk of being completely overrun with Covid-19 patients. The number of patients has already pushed back non-emergency surgeries for many Albertans, and without an increase in capacity to handle an influx of patients, it is likely that more individuals will face complications related to having to wait for procedures and care. This is very much unlike the nations Kenny cited.

It is difficult for many to believe that the changes were not made with the interests of the protestors pushing the discussion. Kenny faced a near revolt from his caucus last week over vaccine mandates, and the concerns of the “Freedom Convoy” protestors lead that discussion. Now, he has presented himself as a political voice for their concerns. The Coutts blockade, of course, has responded by changing their demands.

As of this writing, no breakthrough nor any mass arrests of truckers have been completed in Coutts. The sentiment is that the blockade will likely continue until the RCMP decides to act, or the Canadian federal government balks.