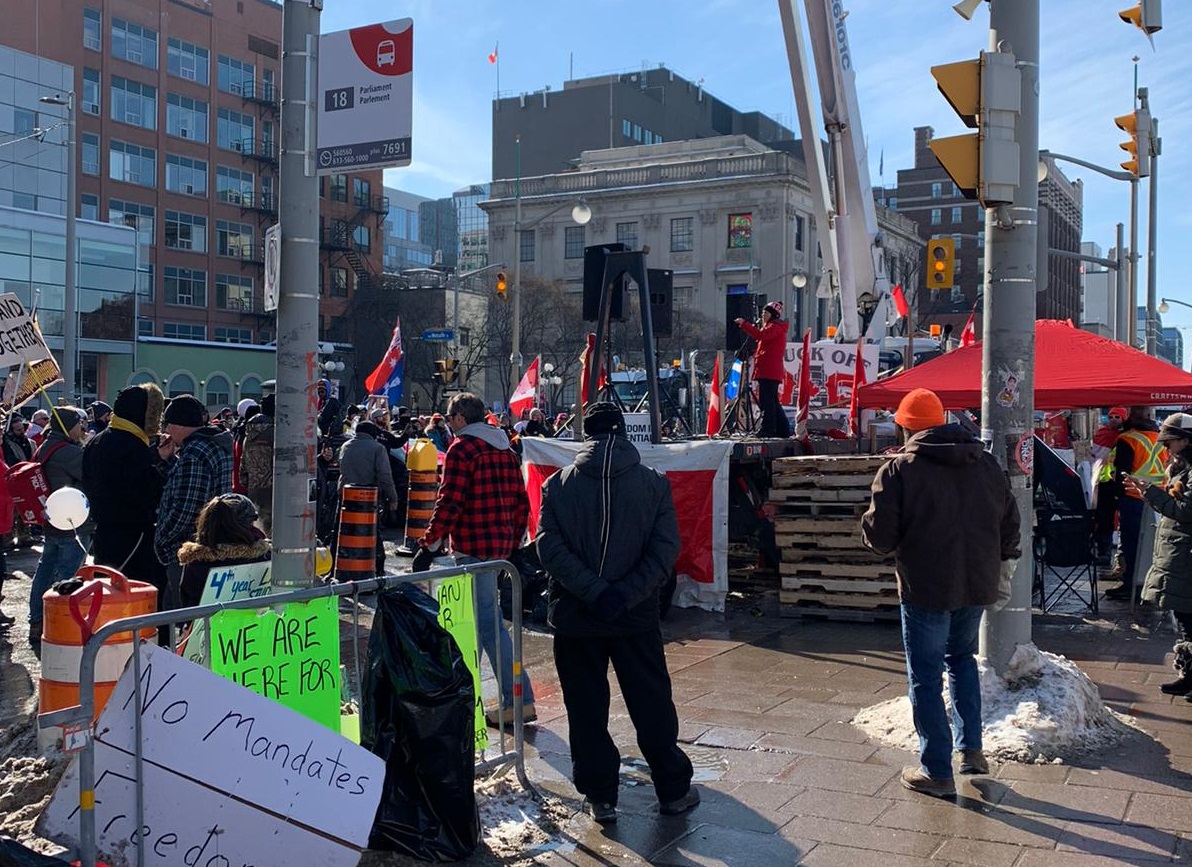 Law students from the University of Ottawa are filing dispatches for JURIST on the “Freedom Convoy” protest in Canada’s capital that has paralyzed the city for over a week. Here, 3L Amanda Werger reports.

In the wake of the rampant hate symbols seen at the “Freedom Convoy”, both the Liberal and NDP parties have plans to introduce new federal legislation on hate symbols.

At the demonstration, there have been many sightings of hate symbols. Protestors have been seen carrying Nazi and Confederate flags. Ottawa Police reported that as of February 8, there had been over 200 calls to the Hate-motivated crime hotline. Similar hate symbols and signs have been spotted at the shadow demonstrations that have taken place across Canada.

Soon after the convoy arrived in Ottawa Conservative Member of Parliament, Michael Cooper, gave an interview supporting it convoy in front of an upside-down Canadian Flag that had a swastika drawn on it. MP Cooper later released a statement saying, “Had I seen the symbol, I would have condemned it, as I do now.” His statement said the individual who was waving the flag behind him “does not represent the thousands of peaceful protestors who waved Canadian Flags and acted responsibly.” His statement affirmed his support of the protest and did not include an apology.

Cooper is not the only protestor to dismiss the hate symbols seen at the protests, as many claim that the actions of a “few bad apples” should not diminish the overall message of the convoy. Others have claimed that those carrying hate symbols are government plants. Conservative MP Cathay Wagantall tweeted that Prime Minister Justin Trudeau sent his personal photographer to “misrepresent thousands of law abiding, hard-working Canadian truckers and millions across the nation supporting them.”

Bill C-229 was tabled by NDP MP Peter Julian and was given its first reading in the House of Commons on February 3. This bill would amend the Criminal Code to explicitly ban symbols of hate. The act would amend section 319 of the Criminal Code, which currently prohibits the public incitement and willful promotion of hatred. Bill C-229 would target symbols such as the Nazi Swastika, the Ku Klux Klan’s insignia, and the Confederate flag. If the legislation passes, those who contravene the law can face a maximum prison sentence of two years.

The governing Liberals also plan to introduce a new version of Bill C-36 to amend the Criminal Code and the Canadian Human Rights Act to address hate propaganda, hate crimes, and hate speech. This Bill was given its first reading in June 23, 2021, but died when the federal election was called. If reintroduced and passed, this bill would create a peace bond to prevent individuals from making racist comments and carrying out hateful threats. This is designed to prevent hate crimes from happening and would include penalties, such as up to four years in prison, if breached.

But the future of Bill C-36 is not assured. Many observers criticized its original version due to problems relating to freedom of speech and its difficulty to enforce. Many also criticized the Liberal Party for the timing of introducing the bill, as it was originally introduced right before the summer break and may have been done to be used as an campaign tool in the recent federal election.