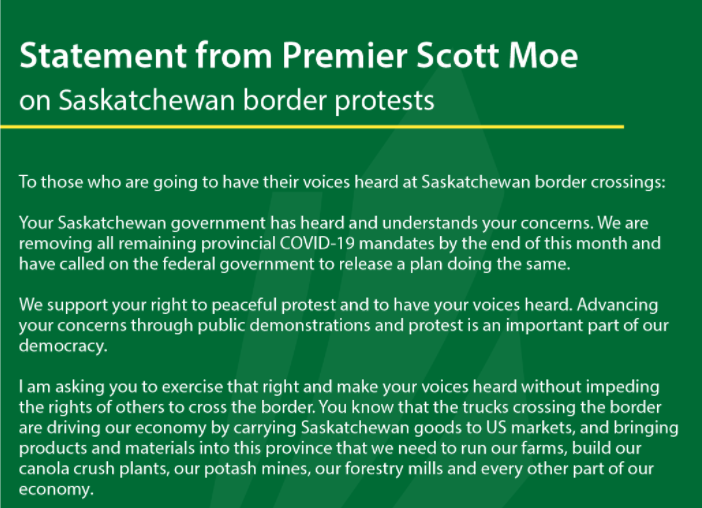 Law students from the University of Ottawa are filing dispatches for JURIST on the “Freedom Convoy” protest in Canada’s capital that has paralyzed the city for over a week and has now spread elsewhere across the country. Here, 2L Brad Henderson assesses the problematic impact of the protest wave on recent provincial and federal public health pronouncements.

On Friday, after 15 days of Convoy protests in Ottawa, and several days of blockades at Coutts border crossing in Alberta and the Ambassador Bridge in Windsor, Ontario, the Premier of Saskatchewan, Scott Moe, pleaded with protestors not to block critical infrastructure in Saskatchewan and reiterated his recent announcement that Saskatchewan intends to remove all remaining COVID-19 mandates by the end of the month.

Many jurisdictions in Canada are reviewing or have already announced plans to remove or modify certain COVID-19 public health measures as case numbers and hospitalizations continue to decline. On Saturday, reports emerged that the federal government intends to remove PCR testing requirements for fully vaccinated Canadians entering the country, and will instead require proof of a negative antigen test—which are relatively more accessible and significantly less expensive than PCR tests, aligning with US policy.

Whether the protests influenced the Premier of Saskatchewan’s announcement remains uncertain, yet the effects of such announcements while these protests are ongoing could be complex and far reaching. The timing of his announcement gives an air of legitimacy to protesters’ demands to ‘end all mandates,’ which are not backed by evidence and often riddled with conspiratorial rhetoric. Many non-COVID-19 public health measures, including vaccine mandates, existed before the COVID-19 pandemic, and many COVID-19-specific measures may be warranted moving forward as we consider longer-term public health strategies to mitigate the effects of the virus.

Appearances of capitulating to these protestors’ demands positively reinforces their significant illegal actions over the past two weeks, which could result in similar protests in Canada or abroad, for similar or different purposes. It also remains uncertain if these announcements and actions alone will satisfy the protestors’ demands, which have so far included ending all COVID-19 mandates, the resignation of current governments, and, from a few self-proclaimed organizers, general calls for a more libertarian society while espousing racist worldviews.

Debates (and peaceful protests) around COVID-19 public health measures should focus on individual measures with consideration to their objectives, costs, benefits, and likely outcomes, not sweeping demands to ‘end all mandates.’ Ending all mandates is not a public health objective. It represents a political and ideological choice that disregards complex moral and ethical dilemmas—one that, at present, would inherently accept higher rates of injury and mortality in Canada.

While public health policy should always be backed by evidence it inevitably involves political choices. Elected officials, as decision-makers, will bear the political consequences of such choices—whether positive or negative—through future elections. However, in matters of life and death, they should not for political reasons hastily respond to pressure from unlawful protests, especially those with mixed demands and unclear objectives based on unsubstantiated claims currently causing harm to Canadian’s safety and well-being and Canada’s economy and international reputation.

Canadians, like many others around the world, are exhausted from the effects of the COVID-19 pandemic. However, their exhaustion and desire for less restrictions should not be conflated with a general acceptance to immediately ‘return to (pre-COVID-19) normal’ and ‘end all COVID-19 mandates’ under the guise of ‘untrammelled freedom,’ which disregards many important public health protections, especially those designed to protect and enable the health and freedom of the most vulnerable in our communities.