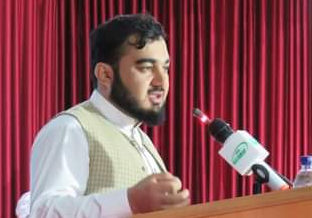 Law students and lawyers in Afghanistan are filing reports with JURIST on the situation there after the Taliban takeover. Here, Afghan lawyer and former UK Chevening Scholar Ahmad Ali Shariati offers a tribute to Sayed Asif Mubtahij Hashimi, Dean of Faculty of Sharia Law at Ghazni University in Afghanistan, who was found dead last Thursday after being abducted by Taliban elements. The text has only been lightly edited to respect the author’s voice.

When a country fails – in politics, economy, law enforcement, education, or maintaining peace – all the enlightened forces of that society come together to debate the problem and seek ways to respond to the challenges and fill the constituted gaps. In every society, lawyers would be considered among the most intellectual and professional groups to step in to allocate and sacrifice all the time and energy they have, to bring a country out of chaos and disorder, and give it a new spirit to move towards development, sustainability, peace and justice.

Every developed country and advanced society could confirm this, and lawyers and legal scholars are much respected and admired as the supporters of that society. Without them, order and progress cannot be guaranteed where there is a blatant lack of regulations, and no rule of law exists.

Since the Taliban terrorists took the power in Afghanistan, lawyers have been frontline victims of their atrocities. Extrajudicial killings, persecution, and confinement of judges, prosecutors and legal scholars have continued in numerous horrific ways. Lawyers involved in the anti-terrorism activities of the previous government have suffered the most. Most of the legal community in Afghanistan are in hiding, some have fled to neighbouring countries, and a small fraction of them have been evacuated by members of NATO – several of them still waiting in the camps of transient countries to reach a safe destination. The majority of the remaining lawyers in Afghanistan are still struggling to escape the country.

In the midst of all this tragedy, Professor Sayed Asif Mubtahij Hashimi, the Dean of Faculty of Sharia Law at Ghazni University, was abducted over two months ago by elements of the Taliban. He was then executed; his dead body was recently delivered to his family. May his soul rest in peace.

Hashemi had a B.A in Sharia Law, an LL.M. in Law and Jurisprudence from Nangarhar University, and had followed legal education courses with the University of Washington in the United States and with the Legal Education Support Program (LESPA) in Afghanistan. He was also a Coach in the Jessup International Law Moot Court Competition for the Ghazni Sharia Law School competing team. His remarkable job led his team to win the competitions in the national rounds and obtain an opportunity to compete in the international rounds in Washington DC.

Among his other academic activities, he had translated three books of Islamic legal jurisprudence from Arabic into Persian.

1. A brief description of “Quduri” and a description of its expressions. This is a highly significant and substantive religious jurisprudential book for the Sunni Muslims School of thought, mainly dealing with the personal aspects of life and worshipping jurisprudence.

2. Imam Abu Hanifa (The leader and conveyer of one of the four school of thoughts among the Sunni Muslims and the prominent Sunni sect in the India subcontinent, Afghanistan, central Asia, Middle East, and some Islamic territories in the world) and his methodology in deriving Jurisprudential issues.

3. And the book of Legitimate and Illegitimate Recourse (Appeal).

As friends for eight years, we usually met at academic events and when he came to Kabul.

He was a bright legal and religious scholar. He shared modern and truly peaceful Islamic ideas that could not stand with extreme ideological views that terrorist organisations like the Taliban share that ignite ignorance and violence.

I remember our group conversations about jurisprudential differences and our debates about numerous topics. He was open for discussion and tried to tackle the problem of misunderstanding religious texts in many ways. Indeed, a lot of us tried to share and publicise similar anti-extremist movements’ ideas for the sake of public awareness. Maybe his liberal ideas and courage to stand against injustices and radical understanding of the extremist groups incited the Taliban or other related terrorist groups to end his life.

I assume this, while none of us can really have at least a partially true account of his abduction and execution. I deeply feel sorry for his family, and I hope to bring and see the perpetrators are brought into justice one day. We mourn for his death as a friend and as a member of the Afghanistan legal community whom we counted on. I am personally sad for his loss, and I cannot imagine the sufferings and situations his family must be going through.

This is not a single case. Since the Taliban re-took power, Mr Merajuddin Waqar, Chancellor of Ghaznavi Private University, was also first kidnapped and then assassinated in the same province. His body was later found in the city. We really do not know how many more losses we should have to witness and bear, staying silent doing nothing.

In such desperate circumstances and insecure environments where scholars and professionals have no sense of security, where they are tortured, insulted, abducted, and killed, who will fix the existing problems? Who will fill the gaps, and which members of the public will dare to act in one way or the other to rescue the country? While my country is going through a severe humanitarian crisis, massive outward migrations, famine, starvation, poverty, extrajudicial killings and many other crimes and atrocities, I am vehemently concerned about its current conditions and the dark future for its people will await if nothing happens, no justice is served, and/or no order is maintained.

Like Professor Hashemi, many others have suffered and have lost their lives. I have personally tried and have not been able to account for many people and colleagues working in the legal community.

After Hashemi’s death, I went to his Facebook account, where we were connected. I read his students, friends and colleagues asking why he left them sadly so soon. I read that he had written a while ago in his page: “We have to burry and carry most of the (unsaid) sayings of our hearts into the grave” and he has then quoted a poem from the legendary poet of Afghanistan—Mawlana Jaludin Mohammad Balkhi “Rumi”—born in the Balkh Province of Afghanistan.

A literal interpretation of the poem says: “I have a dumb dream and the whole world is deaf/I am unable to say it and the people are unable to hear it”. It won’t be enough to write the meaning of such a short line in few pages, but it suffices to say how much Hashemi suffered from the injustices that were going on in the country.

In has another Facebook post he wrote: “Those who are quick to believe, and kind are not stupid, but these are special and honest people who think everybody else have a heart inside them that is kind and honest like them. The Messenger of God (Prophet Mohammad PBUH) said: One of the people from the Paradise are those who are kind, tender-hearted and compassionate towards others and Muslims. Believers and simple people who we think are stupid, no they are not, they are from heaven.”

He has also said: “I struggle to bring freedom and light”.

Not to forget, he has further mentioned that: “When you do not see good in someone, it does not mean that there is no good anymore. Hence, it is you who should do good to show and let everyone else know that good still exist”.

While we are all mourning Professor Hashemi, we are suffering our own losses. We have lost a colleague, a scholar, a kind human, and a law professor committed to his country and education. What he believed in continues: teaching and delivering back to the community. He trained hundreds of young girls and boys. He not only contributed to education and the legal community, the Jessup, the media, and justice, but he stood for knowledge against radicalism. He shall never be forgotten, and we shall always have him dearly in our hearts and thoughts.

The Taliban terroristic regime responsible for his death and execution should be held accountable to the people of Afghanistan and to Professor Hashemi’s family. I wish his family patience and tolerance at what are probably the hardest moments of their life.