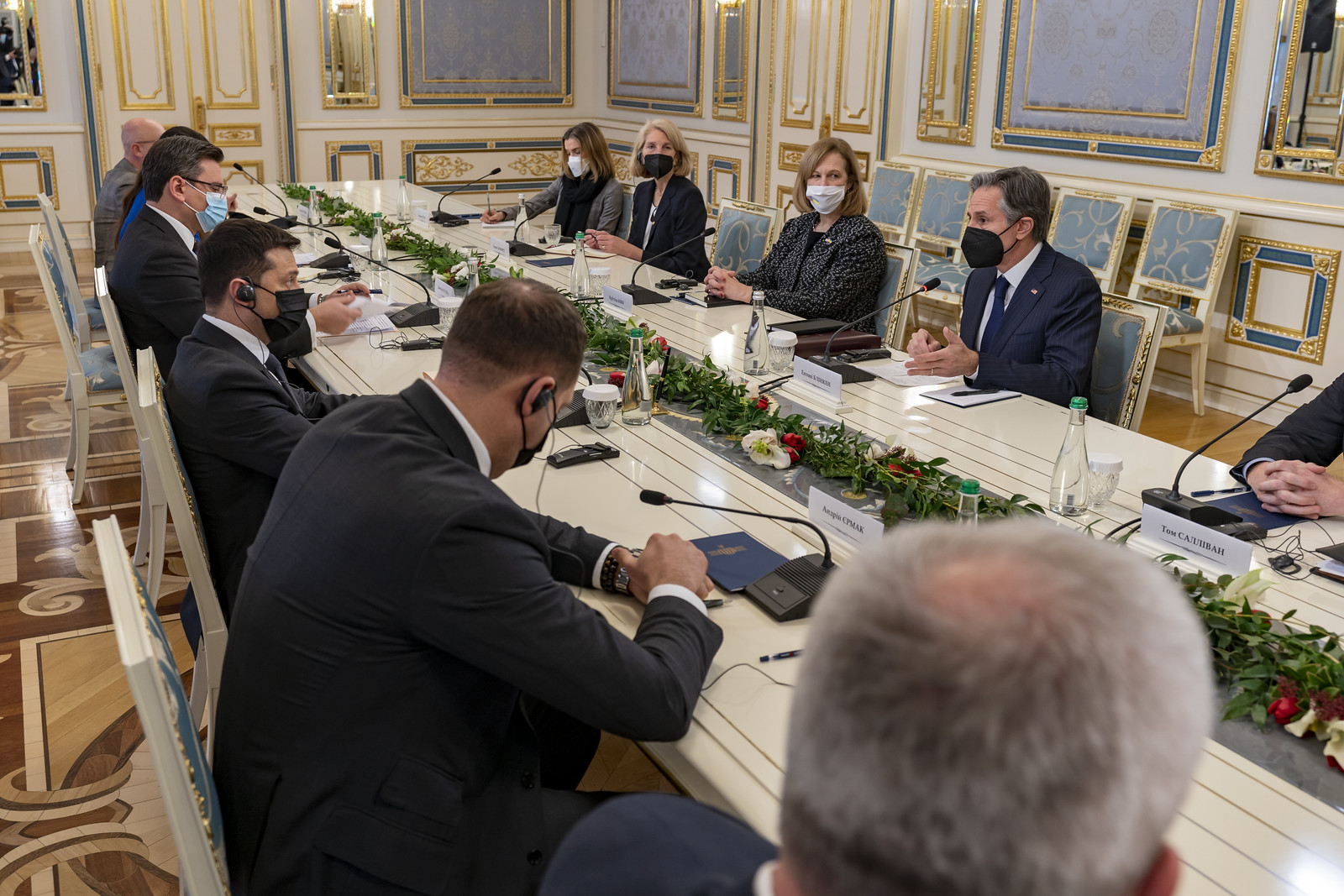 US Department of State

Law students in Ukraine are reporting on the latest developments in that country as it faces a series of internal and external challenges. Here Anna Tymoshenko, a fourth-year law student at Kyiv-Mohyla Academy, reports from Kyiv.

On Wednesday, US Secretary of State Antony Blinken arrived in Kyiv to meet with Ukrainian President Zelensky and Minister of Foreign Affairs Kuleba. Blinken said that this visit was a response to US President Joe Biden’s request to confirm US support for Ukraine.

Ukraine very much needs such assistance in light of the increasingly fruitless talks between Russian, US, and NATO delegations, as well as the concentration of Russian troops near Ukraine’s borders. As early as the end of October 2021, the Washington Post reported that military convoys were transporting significant amount of military equipment, including tanks and missiles, to Russia’s south and west, proximate to Ukraine.

In December, Moscow offered “security guarantees” that would include Ukraine’s non-accession to NATO. Russia has threatened to use a “military-technical alternative” if the West does not take its proposals seriously.

As a result, negotiations between Russia and the United States, and then between NATO and Russia, were held in January, but to no avail. The Alliance has reaffirmed importance of the dialogue, but it is unclear whether Russia’s demands will be accepted.

Surprisingly, a cyber attack on the websites of Ukrainian government agencies occurred two days after the NATO-Russia meeting (more than 70 government websites were attacked). Ukraine’s Security Service announced the discovery of evidence of hacker groups associated with Russian secret services being involved in the incident.

Simultaneously, according to the New York Times on January 8, approximately 100,000 Russian soldiers remain near Ukraine’s borders. According to US intelligence agencies, Russia has devised an offensive strategy that could involve up to 175,000 troops. Ukrainian intelligence has reported that Russia is planning an attack on Ukraine’s east and south in January-February 2022.

Russian Foreign Minister Sergei Lavrov has stated that Moscow’s “patience” has ended in anticipation of the West’s reaction to the Kremlin’s earlier “security guarantees” proposal, and that Russia anticipates receiving a written response to its demands within a week. In response to this provocation, US White House press secretary Jen Psaki said Friday that the Russian government should choose between diplomacy and economic sanctions that would be far harsher than those imposed in 2014.

Blinken, speaking at today’s press conference, said that the US intends to continue military assistance to Ukraine in the coming weeks. According to Blinken, the increased presence of Russian troops on Ukraine’s border indicates that Moscow is ready to launch an invasion as soon as possible. The Secretary of State hoped that Russian President Vladimir Putin would follow a “peaceful path”. He stated that should Russia’s aggression resume, the US will provide additional assistance.

The Secretary of State also urged the continuation of reforms in Ukraine, particularly in the anti-corruption sphere, as well as unity among Ukrainians.

Following a meeting with Blinken, Ukraine President Volodymyr Zelensky thanked him for his personal engagement in de-escalation.

Russia has reacted to the visit with rather tough talk: according to the Russian news agency TASS, Russian Foreign Minister Sergei Ryabkov said that Russia demands one of two things from the West – either withdrawal of the Bucharest summit formula of 2008, which declared that Ukraine and Georgia should join NATO, or a legal commitment of the United States to never vote for Ukraine and other countries to join NATO. Ryabkov claimed Russia will do will do everything possible “diplomatically” to stop the continuation of Ukraine’s integration into NATO, “because this process affects the interests of Russia’s security”.

US Secretary of State Blinken will meet with Russian Minister of Foreign Affairs Lavrov in Geneva on January 21. We will monitor the progress of these events.