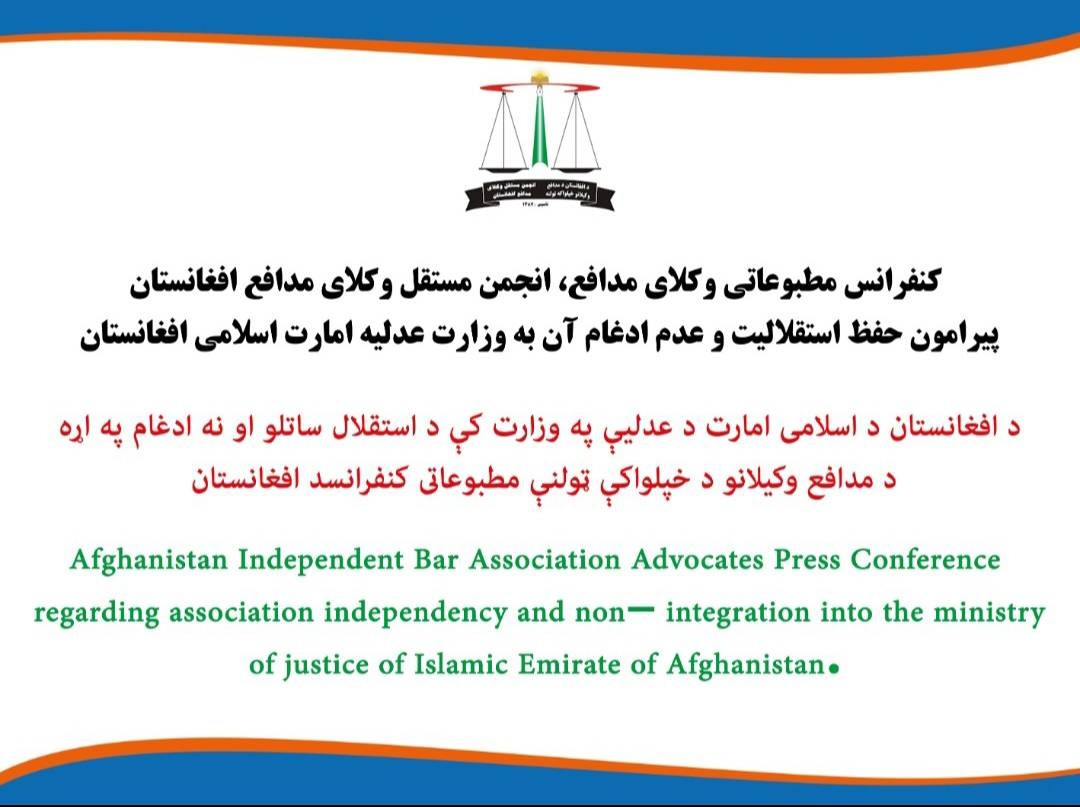 JURIST EXCLUSIVE – Armed Taliban fighters broke up a press conference by Afghan lawyers about to start at a Kabul hotel early Sunday morning, arresting several of the lawyers in attendance. A group of four women lawyers and two male lawyers calling themselves the Afghanistan Bar Association Advocates had called the press conference for 10 AM AFT, inviting media and local NGO and UN representatives to the Esteghlal Hotel near Kabul Airport to hear them state their case against the recent Taliban takeover of the AIBA and the removal of lawyer licensing authority from the AIBA to the Ministry of Justice.  About 40 minutes before the scheduled start of the press conference, armed Taliban fighters arrived in an armored vehicle outside the hotel and surprised the organizers, who had previously obtained permission from the authorities for their event. The lawyers arrested were held for about half an hour before being released.

A six-page statement in Dari and Pashto intended to be released at the lawyers press conference and obtained by JURIST beforehand set out a series of advantages and disadvantages to the AIBA’s forced integration with the Ministry of Justice. The preamble (as translated by JURIST’s law students in Afghanistan) said in part:

Since the very goal of lawyers is empowering the justice system by bringing justice to the citizens of a country, thus an independent lawyers is the most significant element in a system which its practice is to bring order and justice between the citizens in one hand, and between citizens and public offices on the other. Independence in no shape or form means that the lawyers or the lawyers’ association will not be responsive toward the government; rather it means that lawyers will kept away from political pressure and thus work in the best possible manner toward ensuring justice to the public.

Here is a rough translation (again provided by JURIST’s law students in Afghanistan) of the substance of the document:

Reasons for independence of the Association:

It should be mentioned that emphasis on the independence of the Bar Association does not mean that it should change into a solitary and independent island and preclude any possibility to monitor its activities. Most activities of the Independent Bar Association are the defenders of governance that is principally in the control of government branches. The qausi-legislative powers (codification of rules and regulations in related sections), paying income tax and monitoring the income of defense lawyers in order to apply tax necessitates the intervention and monitoring of the government. Anyways, the comparative studies indicate that the intervention of governments in some of the affairs related to Independent Bar Associations is accepted, but the difference is only the extent and approach.

Disadvantages of integration of the association with government:

The council of ministers of Islamic Emirates of Afghanistan in its 19 November 2021 session based on the suggestion of the ministry of justice decided that the issuance of license will be done according to the Instructions (it’s a type of government rule in Afghanistan in the hierarchy of laws: added by Translator). While throughout the years this association has been independent and non-governmental, and has served people. Taking the principle of two opposite things cannot come together into consideration that matters related to discovery of crimes, investigation and trail are the responsibilities of the government and it is important that defendant who is condemned or denounced in a criminal issue, should be represented by a lawyer associated with a non-governmental organization, necessitates that Afghanistan Independent Bar Association remain independent.

Taliban fighters took over the AIBA offices in Kabul on November 23, threatening staff and lawyers inside before expelling them from the premises. They then unilaterally named a new president for the Association, originally established in 2008 with the support of the London-based International Bar Association. In conjunction with this takeover, the Taliban Ministry of Justice announced that it was taking over control of lawyer licensing, and has since indicated that lawyers will have to requalify under the auspices of the Ministry by an as-yet-unannounced process.