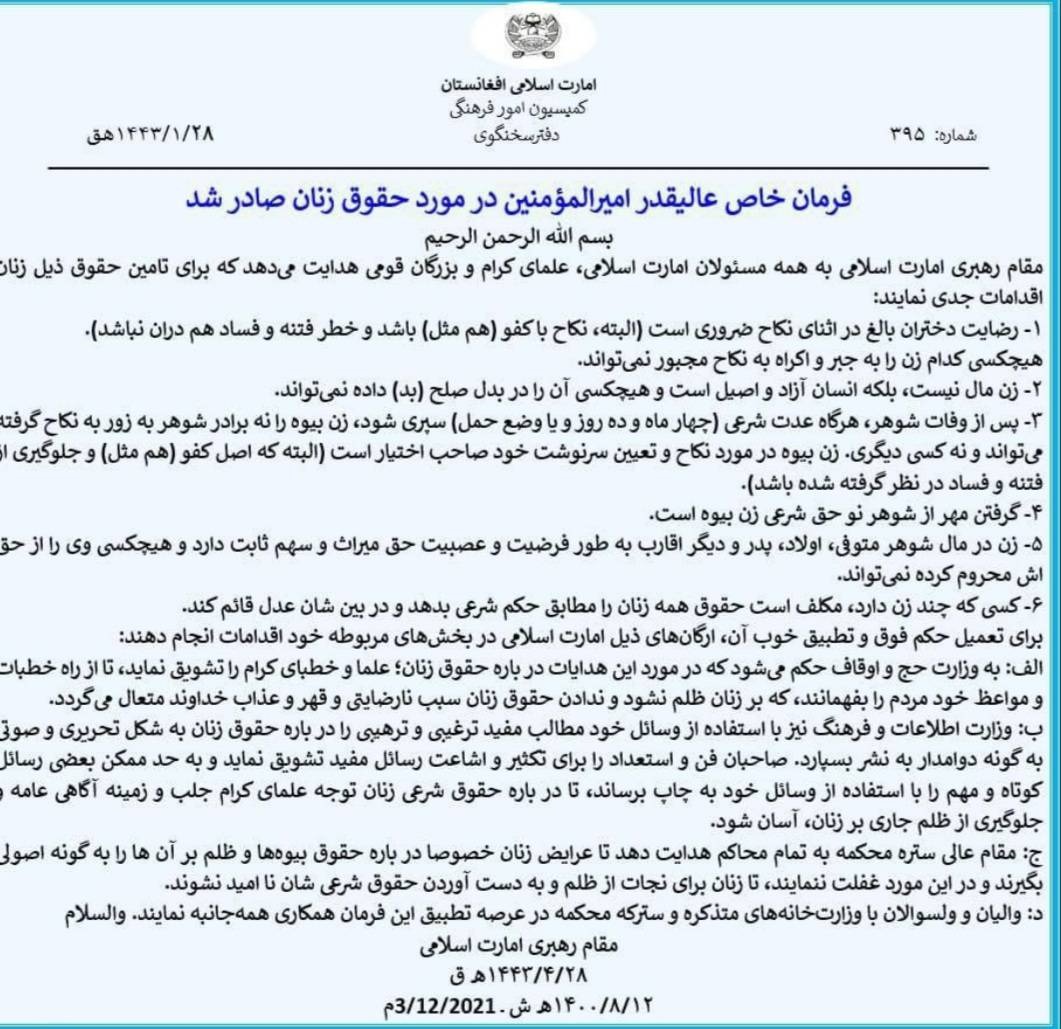 Law students and lawyers in Afghanistan are filing reports with JURIST on the situation there after the Taliban takeover. Here, a Staff Correspondent for JURIST in Kabul comments on a new decree on women’s rights issued by the Taliban government.  For privacy and security reasons, we are withholding our Correspondent’s name. The text has been only lightly edited to respect the author’s voice.

On Friday, the Taliban-led government issued a Decree on Women’s Rights which contains basic Islamic rules concerning marriage and property. The Decree fails to provide any order on women’s education and work, which are the two major challenge in the country.

The Decree says that women should not be forced into marriage and they are free human beings. Furthermore, the Decree provides that women are not to be considered “property” and both women and men are equal. “A woman is not a property, but a noble and free human being; no one can give her to anyone in exchange for peace…or to end animosity,” the Taliban Decree, released by spokesman Zabihillah Muhajid, said. Women, according to the Decree, should receive a portion of their late husband’s property and should be able to re-marry after a specific period that their husband dies.

– Ministry of Hajj: instructed to encourage Islamic scholars to talk about women’s rights under this Decree in mosques.

– Ministry of Information and Culture: instructed to use both visual and audio instruments to raise awareness on women’s rights in the country.

– Supreme Court: instructed to order all courts to give priority to petitions received by women in the country considering any problem they face.

Governors and District heads are ordered to assist the above-mentioned government agencies on the implementation of the Decree. The Decree contains basic rules of Islam on women, and therefore I believe it will make no significant difference in the current situation. The Decree does not privilege women with any new rights and benefits. The above terms are already governed by Islamic values, rules, and regulation.

The above comes after immense pressures by the international community on the Taliban government to respect women’s rights and provide access to education and employment in both private and public sectors.