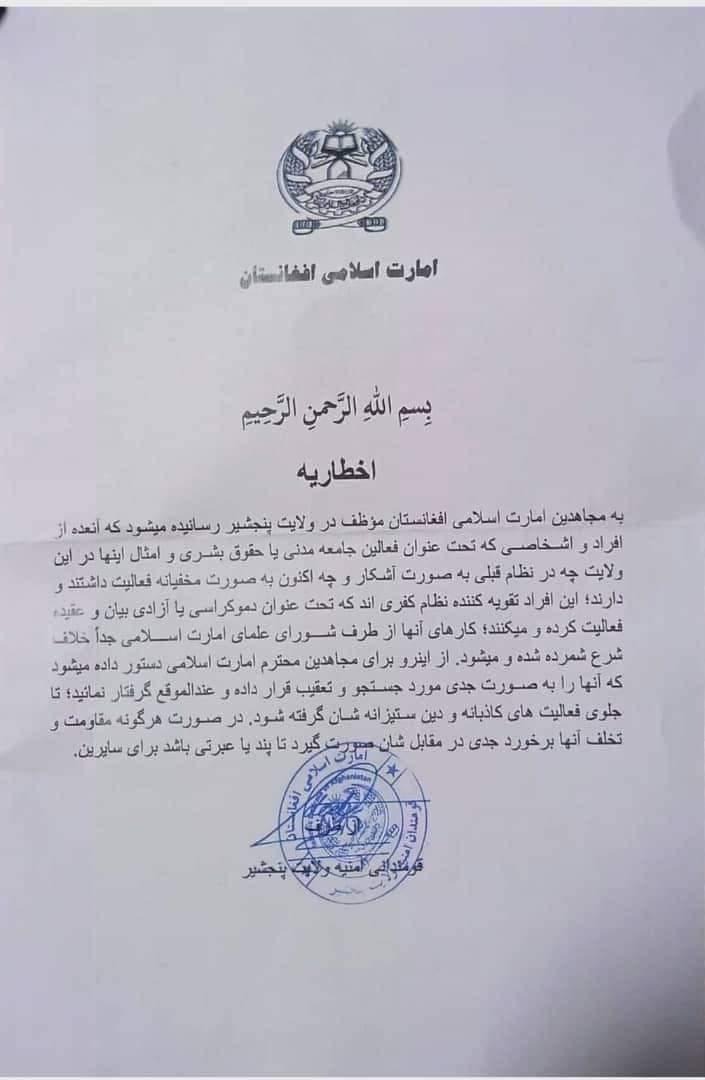 Law students and lawyers in Afghanistan are filing reports with JURIST on the situation there after the Taliban takeover. Here, a lawyer in Kabul provides JURIST with a rough English translation of a new Taliban warning to human rights activists and civil society workers in Panjshir province, which has supported resistance to Taliban rule. For privacy and security reasons, we are withholding our translator’s name. We are informed that the instrument is expressly entitled “Warning”.

The Mujahideen of the Islamic Emirate in Panjshir province are informed that،individuals and institutions under the name of civil society or human rights activists and the like  operated openly in the previous government and in secret in the current system.

These people strengthen the Infidel system, which they serve under the name of democracy and freedom of expression and opinion.

Their work is considered illegal by the Council of Scholars of the Islamic Emirate.

Therefore, the Mujahideen of the Islamic Emirate are instructed to seriously find and pursue them and arrest them as soon as possible to stop their false and anti-religious activities.

In case of any violations and their resistance, they should be dealt with seriously in order to be a lesson for others.

Another JURIST correspondent in Kabul who has seen this instrument adds: “This letter is signed and stamped by the Security Command of the province. I had heard that the CSOs and those who work in media and other activists are threatened in that province. But I did not know that the Taliban forces are officially instructed to fight them. Some days ago, there was another decision by the Taliban that only those who have ID cards from Panjshir can enter and not anyone else.”