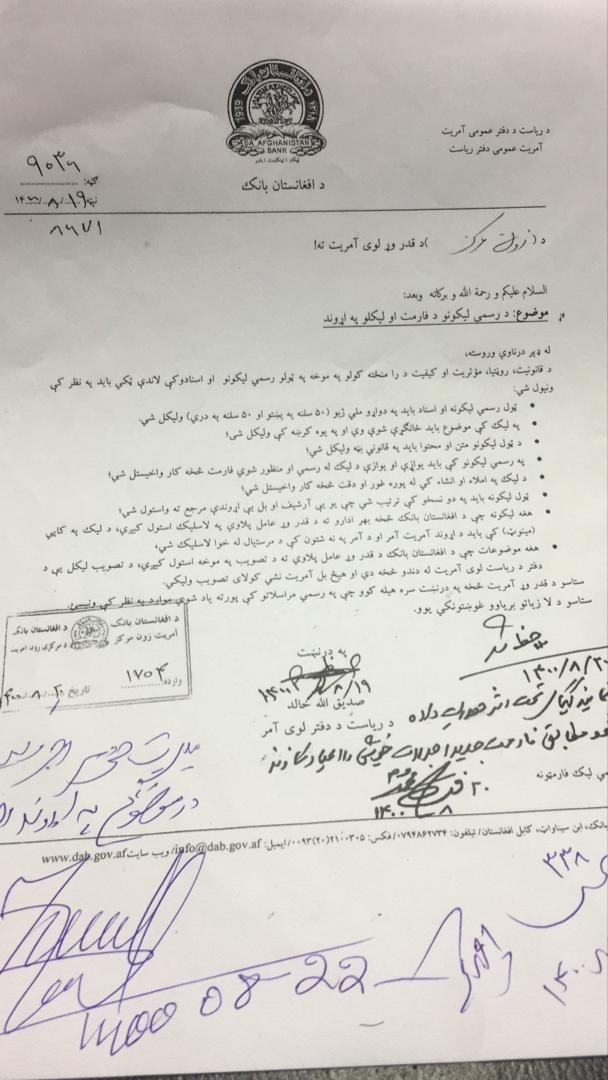 Law students and lawyers in Afghanistan are filing reports with JURIST on the situation there after the Taliban takeover. One of them files this comment on a leaked letter recently issued to departments and officers of the Afghan central bank requiring both Pashtu and Dari to be used in official communications. The text has been only lightly edited to respect the author’s voice.

The central bank has issued a letter to all of its department stating that they shall use both Pashtu and Dari in their official communication. The wording of the letter is not professional and I believe is in contradiction to the constitution of the country.

The constitution states that Dari and Pashtu are the official languages of Afghanistan. The usage of any language is not obligatory and the Afghan legislation does not obligate anybody to use one specific language. This means that for people and employees who can write in Pashtu they are allowed to do so, and if any employee uses Dari, there is no restriction.

1. Official documents and letters shall be in both Dari and Pashtu. The letter also says that all letters shall have 50% Dari and 50% Pashtu in it. This makes it very difficult for the employees to comply because not all the employees can write in both languages. Therefore, anyone who cannot comply with it will be deemed that he/she has violated this new policy and committed an administrative violation based on which the employees can be punished by disciplinary measures.
2. All letters shall have a specific line regarding the overall subject of the letter. This has been accepted as a rule previously too.
3. The content of the letters shall be legally ok. I do not understand what they mean by this.
4. The official letters shall be in a specific format/template. The problem is that this circular by the central bank do not provide any template/format for the official letters.
5. The letters should be checked from the spelling point.
6. All letters shall be prepared in two copies so that one copy could be archived.
7. Letters which go outside having the signature of the executive board (governor, the first deputy governor, and the second deputy governor) first shall be signed by the relevant head/director of the department.
8. All approvals on the letters shall be written by the Chief of Staff and other departments cannot write approvals.

I believe the above letter is only meant to bring in Pashtu language into the official communication system, which is difficult to enforce.