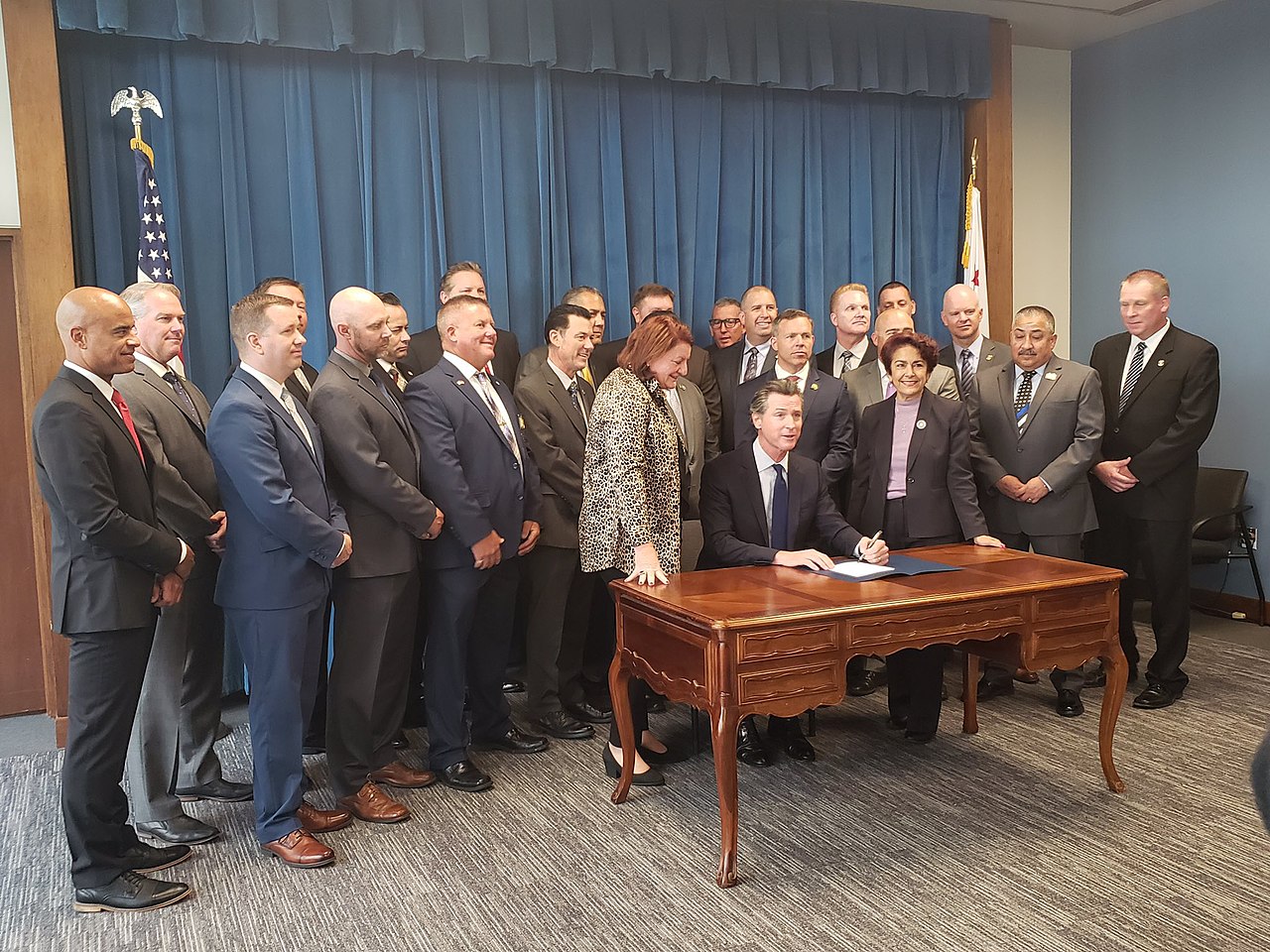 © WikiMedia (Office of the Governor of California)

JURIST is launching a new series of dispatches from major US states written by JURIST correspondents “on the ground” in those jurisdictions. JURIST Operations Director Ram Eachambadi files this report from Los Angeles.

Less than a month after his recall victory, a re-energized Governor Gavin Newsom has gone on the offensive, signing numerous bills and passing orders to address the state’s homelessness crisis, police misconduct, historical injustices suffered by California’s Black entrepreneurs and the Native American community, and the continuing COVID-19 crisis. It would appear that the governor would let nothing stand in the way of his mission to take California on a path to salvation.

On Friday, Newsom announced a vaccine mandate order for middle and high school grade children attending schools in person. The mandate becomes effective as soon as the vaccine receives full approval from the Food and Drug Administration (FDA).

This would be yet another “first in nation” measure from California as the mandate would add the COVID-19 vaccine to list of vaccinations required for in-person school attendance, such as the vaccines for measles, mumps, and rubella. California was also the first to impose school mask mandates and vaccination mandates for school staff.

This latest mandate is a rather bold move from Newsom considering he just survived a recall and that vaccine reluctance even among California residents may go across partisan lines. In fact, part of the reason the recall gathered enough signatures was because of the many strict COVID-19 measures Newsom ordered. However, with that being said, Newsom can consider himself lucky to be governing a state where overall vaccine reluctance and opposition to mask mandates are still very low in comparison to other states.

In any event and regardless of any opposition, Newsom appears steadfast in his position on this matter:

The state already requires that students are vaccinated against viruses that cause measles, mumps, and rubella—there’s no reason why we wouldn’t do the same for COVID-19. Today’s measure, just like our first-in-the-nation school masking and staff vaccination requirements, is about protecting our children and school staff, and keeping them in the classroo…Vaccines work. It’s why California leads the country in preventing school closures and has the lowest case rates. We encourage other states to follow our lead to keep our kids safe and prevent the spread of COVID-19.

The school vaccine mandate is not the only action Newsom has taken in the last couple of weeks. As noted earlier, the Governor has been busy aggressively signing numerous legislation to address the homelessness crisis and police misconduct, provide reparations for Black entrepreneurs who have had their property wrongfully taken by the government, and support “tribal access co-management and acquisition of ancestral lands” for Native American communities in the state.

The homelessness crisis in California has become worse over the years and was a primary issue on the minds of Californians who were still undecided on whether to vote in the recall at all. Newsom’s primary opponent in the recall, Larry Elder of the GOP, called the Governor out on this very issue claiming that Newsom had already broken his promise to the city of San Francisco as its Mayor to end the homelessness crisis.

There are approximately 170,000 homeless individuals on any given night in California and many, as a consequence of their homelessness, suffer from severe mental health issues and substance abuse problems. Those Californians fortunate enough to have a roof over their head are angry about the piling up of trash and discarded belongings in streets, and the numerous tent encampments that have sprung up in parks and residential neighborhoods.

But are state and city officials to be blamed entirely for all this? In my own personal observation and my family’s observations of fellow Californians, those who want a solution to the homelessness crisis immediately back down when that solution involves building affordable housing units in their own neighborhoods. In other words, they would like to be the top cheerleaders for solutions but do not want to be part of the solution.

This is a problem that also spans across partisan lines. That is to say, this is not a Democrat versus Republican problem. Liberals—particularly, well-to-do liberals—are not necessarily holding their hands up high to indicate their willingness to help.

Whatever the reason for this reluctance to be part of a solution to the homelessness problem, the result in Newsom’s own words is a vicious cycle “We don’t build housing for people at all income levels, and as a consequence we worsen the homeless crisis.”

Perhaps emboldened by the recall victory Newsom rushed to sign these bills, possibly also to serve as a rebuke to his critics. It is not entirely clear how this might impact his 2022 electoral prospects, but as I noted in previous dispatches, Newsom is already popular in the “deep blue state” of California. Unless serious errors and mismanagement occur in the administration of efforts undertaken under these bills, Newsom should have no trouble winning the next election.

It did not end there. As we covered earlier, it would appear that Newsom has also been amped up enough to take the bold step of signing a series of bills on Thursday creating a system for decertifying police officers for serious misconduct. With this legislation, Newsom hopes to increase the transparency of police misconduct records.

Among other things, these bills raise the minimum age at which someone is eligible to become a police officer to 21, increase educational requirements for becoming an officer, ban techniques involving the risk of positional asphyxia and other harmful restraint techniques, increase the transparency of misconduct records, and most significantly, subject officers who fail to intercede when observing another officer using excessive force to discipline “up to and including in the same manner as the officer who used excessive force.”

Existing California law already required officers to report use of force that they believe to be unnecessary and to intercede when present and observing their fellow officers using excessive force. However, no consequences were attached to a failure to report such conduct. This bill now provides for the disciplinary consequences noted above. With the signing of these bills, California would likely become “first in nation” in yet another category—policing police conduct.

Also signed in the last two weeks were Senate Bills (SB) 796 and 231 to right other historical wrongs involving the return of “Bruce’s Beach” in the Manhattan Beach area of Los Angeles to descendants of Black entrepreneurs, Willa and Charles Bruce, and “Blues Beach” in Mendocino County to a nonprofit organized by Native American communities.

Newsom’s signing of SB 796, almost seems like a sharp rebuke directly pointed at Elder, an African-American, who suggested during his campaign that descendants of “slave-owners” be paid reparations for the government’s forceful taking of their “property” after the civil war.

The Bruces purchased the Manhattan Beach property in 1912 and established a popular resort serving Black residents in the area. The Bruces endured years of racist harassment and violence, and Manhattan Beach city officials ultimately seized their property through eminent domain in 1924.

Earlier this year, the Los Angeles County Board of Supervisors voted unanimously to transfer to the property back to the Bruce family in motions co-authored by Supervisors Janice Hahn and Holly Mitchell, but the transfer had to await California legislature’s authorization. That authorization came when the legislature voted unanimously return the property to Bruce’s descendants.

The nonprofit was organized by the tribes for environmental protection and cultural preservation purposes. SB 231 prohibits commercial activity on the property, and mandates continued public access to the beach from sunrise to sunset, maintenance of natural habitat in the area and protection of Native American cultural resources.

The Newsom administration is also working to actively identify places named after racist individuals with an intention to rename them with indigenous names.

While all of these efforts are rather bold and aggressive actions on the part of Newsom, it makes one wonder about the speed at which the Governor has accomplished the above-noted actions. It has been barely three weeks since Newsom won the recall election. If he could do all this in such a short time, what stopped him from doing so before?

Granted, he had the pandemic on his mind which hit just a year after he assumed office as Governor, but I cannot help think that we are seeing a “new” Newsom here who seems less worried about his political future and more focused on accomplishing a set number of objectives before the 2022 gubernatorial elections, particularly in the event of a potential loss in those elections. Or perhaps he is emboldened by the public faith expressed to him through the recall elections that he now believes he should pursue aggressive strategies.

We will never truly know what goes on the man’s mind and I hate to belabor a point I have brought up in my previous report, but it is time to repeal the recall. If Newsom does feel emboldened now and is amped up to pursue aggressive measures, pursuing an amendment to repeal the recall would fit with that purpose—not to mention, save him from the headache of facing another potential recall effort post-2022.