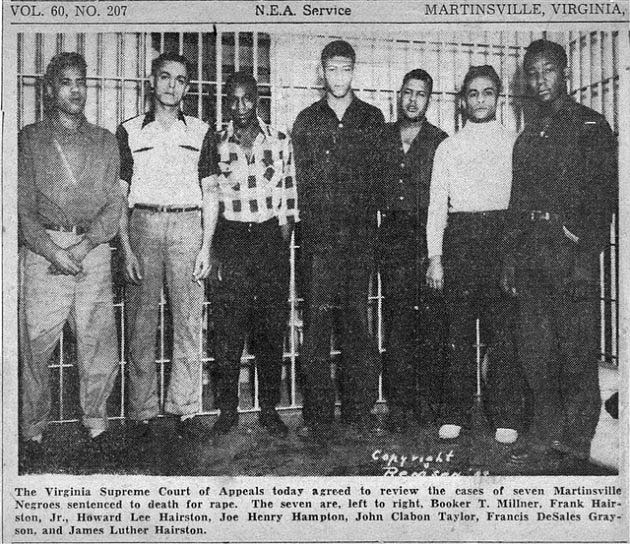 Virginia Governor Ralph Northam on Tuesday granted posthumous pardons to the Martinsville Seven, a group of young Black men who were tried, convicted and executed in 1951 without sufficient due process and given the death sentence by a racially biased all-White male jury.

The pardon comes 70 years after the men were executed by electric chair by the Commonwealth of Virginia for the alleged rape of a White woman the same year. While the pardons do not address the innocence or guilt of the seven men, they acknowledge a massive failure of due process in their case and that race played an “undeniable role” during the identification, investigation, conviction, and the ultimate sentencing of the seven men.

Francis DeSales Grayson, Frank Hairston, Jr., Howard Lee Hairston, James Luther Hairston, Joe Henry Hampton, Booker T. Millner and John C. Taylor—who came to be known as the Martinsville Seven—were convicted and sentenced to death within a period of eight days and none had attorneys present during their interrogation. Additionally, some of the men were impaired at the time of arrest or unable to read the confessions they signed.

The Martinsville Seven execution is considered the largest group execution for a single victim crime in Virginia’s and possibly US history, and among the first in a series of cases such as Furman v. Georgia, Coker v. Georgia and Kennedy v. Louisiana that have raised doubts about imposing the death sentence for crimes such as rape.

Northom, who made the announcement in a meeting with descendants of the seven men, stated of the pardon:

This is about righting wrongs…We all deserve a criminal justice system that is fair, equal, and gets it right—no matter who you are or what you look like. I’m grateful to the advocates and families of the Martinsville Seven for their dedication and perseverance. While we can’t change the past, I hope today’s action brings them some small measure of peace.

The pardons of Martinsville Seven are part of a record-breaking 604 pardons granted by Northam since his term began—a figure that significantly outnumbers pardons granted by the nine previous governors combined. Furthermore, Northam has acted on 2,000 other petitions for pardon which had been pending since former Governor Terry McAuliffe took office in 2014.

Northam also announced new steps to streamline the pardon process in May to increase staff, redesign the pardons website and create a new petition portal that allows electronic tracking submission and tracking of pardon requests.

Virginia has executed more people than any other state with studies showing that a defendant is more than three times as likely to be sentenced to death if the victim of the crime is White. Between 1908 and 1951, all 45 prisoners executed for rape in Virginia were Black men. In 1977, the Supreme Court ruled that imposing the death penalty for rape was cruel and unusual punishment. Virginia became the 23rd state to abolish the death penalty in March.