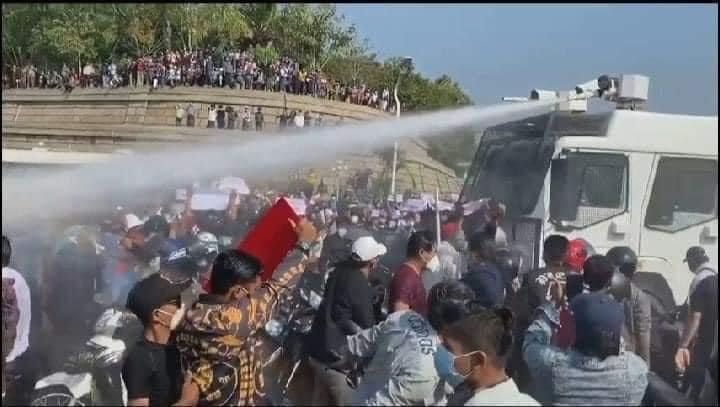 Amnesty International reported Thursday that the Myanmar military (the Tatmadaw) is increasingly adopting lethal tactics and weapons, ordinarily employed on the battlefield, against peaceful protesters of the February coup.

Officers are reported to be using weapons such as semi-automatic rifles, sniper rifles, and light machine guns, which are not appropriate for policing. These are coupled with indiscriminate use of reckless and contentious “crowd control” measures such as tear gas, water cannons, rubber bullets, and “pepperball” launchers.

Amnesty’s Crisis Evidence Lab has examined and verified more than 50 videos from the ongoing crackdown confirming that security forces are implementing systematically planned strategies inclusive of the use of lethal force. It terms the killings of protesters, the numbers of which are reaching at least a dozen every week, as “extra-judicial executions” that are being carried out in a “planned, premeditated and coordinated manner”.

These are not the actions of overwhelmed, individual officers making poor decisions. These are unrepentant commanders already implicated in crimes against humanity, deploying their troops and murderous methods in the open. … The military authorities must immediately cease their deadly onslaught, de-escalate the situation nationwide, and release all those arbitrarily detained.

As Amnesty has also highlighted, the tactics of killing sprees are not new, but today they are being streamed in real-time for the world to see and take notice. Ethnic minorities such as the Chin, Kachin, Karen, Rakhine, Rohingya, Shan, Ta’ang and more have borne the brunt of the junta’s violence for years.

Mariner reiterated the group’s call to the UN Security Council and the international community to move beyond statements of concern and take immediate action to end the violence and hold the Tatmadaw accountable.