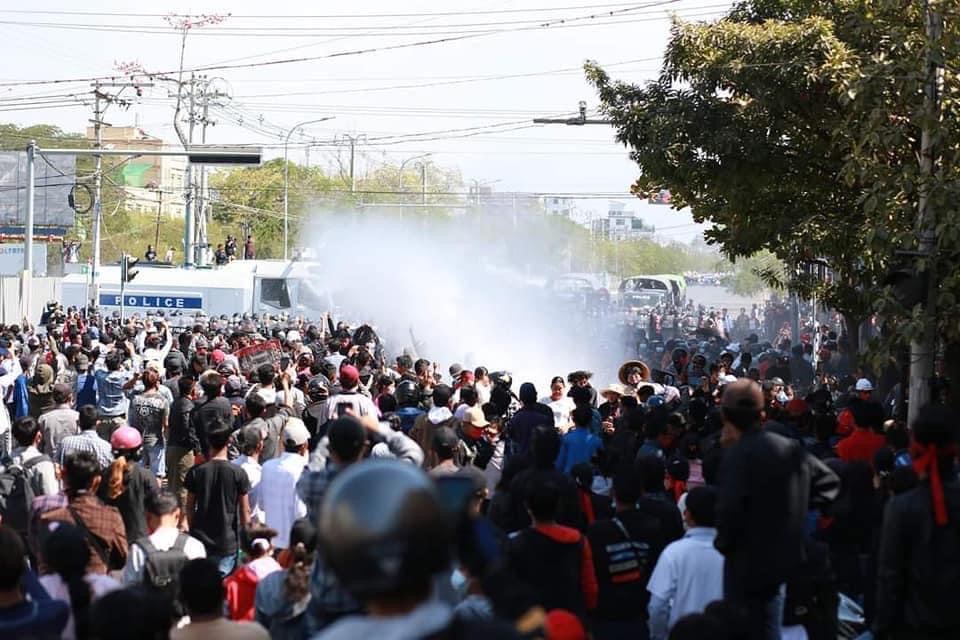 JURIST EXCLUSIVE – Law students reporting for JURIST in Myanmar said Tuesday that peaceful mass demonstrations by lawyers, students and other groups of civilians in defiance of a military ban on public assembly imposed Monday in the wake of last week’s military coup were violently broken up by police using water cannon and bullets. Force was used against marchers in Mandalay, Nay Pyi Taw and Yangon. Several people were injured, at least one critically, and some 30 people in Mandalay were arrested. Rubber bullets were certainly used and several observers say real bullets and tear gas were also used. Our correspondents are concerned that in light of the police crackdown, now much more severe since the country’s military leadership invoked Section 144 of the country’s criminal code, Internet service for the country may be cut off again, as it briefly was at the end of last week.

One of our  correspondents writes:

Day by day, the military coup is getting worse and they are starting to show their true colors. Today they have started using chemical-mixed water to spray on the peaceful protesters and the military have given the police forces the order to hit, detain and even to shoot the protesters. First, they detained our true leader Daw Aung San Suu Kyi, our President U Win Myint and other leaders and well-known people of the country. Then, they declared themselves as leaders and took positions in every ministry.

They tried and are still trying to lie to the world that they had to do this coup because the country is not peaceful. But the country was in fact PEACEFUL until the 1st of February when the military led by Min Aung Hlaing (may he suffer a terrible fate) took reign by force. They are announcing about there being an election fraud while they are the only ones who are able of doing such frauds.

This fore-mentioned military has done such coups several times in our country and we have been under their dictatorship until 2010. Our country has endured so many injustices under the military reign and they have abused their power to sell off the nation’s resources for their own benefits. Now, they are trying to repeat their unlawful acts again. They are abusing the weapons which are supposed to be used to protect the citizens. They are threatening the citizens with these said weapons.

This is not just our country’s affairs. This is a threat to democracy all around the world. Because the armed forces are bullying the unarmed citizens and they are using weapons against the peaceful protesters. They are taking away our rights and our voices using their weapons.