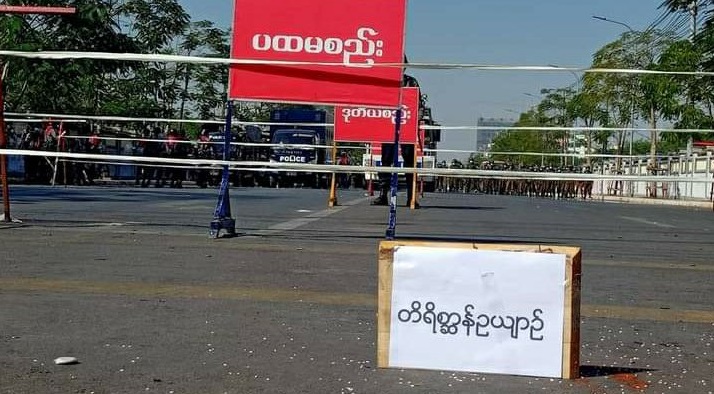 JURIST EXCLUSIVE – Protests against the February 1 coup that installed a military government in Myanmar continued Wednesday as authorities released most people detained in Tuesday’s large-scale protests in defiance of a military ban on public gatherings. The protests were peaceful. Although police kept a close watch, demonstrations were not broken up with water cannon or rubber bullets as some were previously. There were no deaths or significant reported injuries, and a law student correspondent on the ground for JURIST described it as a “good day”. In Mandalay, university teachers and academicians marched in uniform, and the protests displayed a more theatric and even somewhat defiantly celebratory tone as student organizers deployed themselves as super-heroes, beauty queens and movie characters to catch international media attention.

Another of JURIST’s law student correspondents described the march:

Today on 38th street (aka Aung San Suu Kyi Street) in Mandalay, there were police and soldiers with full bulletproof vest and guns. That street is a gathering place for a lot of people. We used to gather there not only because the street was named after our leader but also there is a huge building (soon to be a hall and a hotel) owned…by a son of that military dictators group. Yesterday, they arrested people there and today, they made three lines (naming first line, second and third). They threatened us that if we pass any lines, they’ll shoot us with real bullets. I was there with a group of my university teachers and professors to protest. We didn’t cross any of those lines. Someone went and put a notice board in front of those line. The board says “The Zoo” (where only animals live).