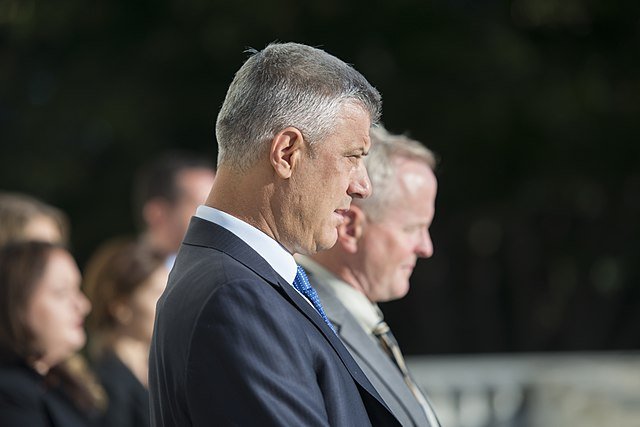 Kosovo President Hashim Thaci stepped down Thursday to face charges of war crimes and crimes against humanity allegedly committed during the 1990s armed conflict against the Federal Republic of Yugoslavia (FRY) for Kosovo’s independence.

Thaci was indicted in June on crimes of persecution, imprisonment, illegal or arbitrary arrest and detention, other inhumane acts, cruel treatment, torture, murder, and enforced disappearance of persons, that the Kosovo Liberation Army (KLA) committed against opponents. Opponents included persons who were or were perceived to have been collaborating with FRY authorities, not supporting the KLA, and persons of Serb, Roma, and other ethnicities. Thaci held a leadership position with the KLA.

Thaci is currently in custody at the Detention Facilities of the Kosovo Specialist Chambers in The Hague. Thaci’s first court appearance is scheduled for Monday. KLA leadership members Kadri Veseli, Rexhep Selimi, Jakup Krasniqi were also indicted on the same crimes and transferred to detention facilities in The Hague.

Victims are allowed to apply to participate in the proceedings if they can demonstrate that they personally suffered harm, including physical, mental or material harm from the crimes listed in the indictment.

During a special swearing-in ceremony in Kosovo on Thursday University of Pittsburgh School of Law alumna Vjosa Osmani officially became the Acting President of Kosovo. Osmani is the second woman to serve as head of state out of post-war Kosovo’s six presidents.