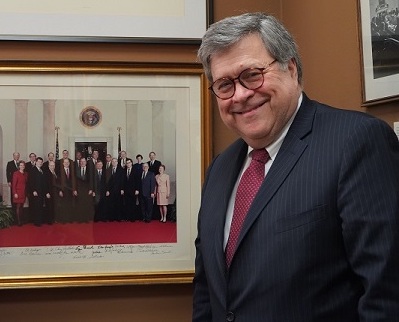 Barr has been at odds with the Democratic leadership of the committee since the beginning of the week over the format of the hearing. House Judiciary Chair Jerry Nadler (D-NY) wanted each committee member to have five minutes to question the Attorney General and then a staff attorney from the majority and the minority of the committee would each be given an additional 30 minutes to question the Attorney General. Barr refused to appear before the committee under this format arguing that the executive and legislative branches are co-equal branches of government and he should only face questioning from the members. Barr announced his intention to skip the hearing through a Department of Justice spokesperson Wednesday evening and failed to appear before the committee this morning.

Barr testified for over four hours Wednesday before the Senate Judiciary Committee. Barr faced questions from both parties on his handling of the Mueller Report and Robert Mueller’s letter in response to Barr’s original four-page summary to Congress. The questions included definitions of obstruction of justice, 2016 conspiracies, whether the underlying evidence factored into Barr’s summary, and discrepancies between Barr’s testimony and the text of the redacted Mueller Report. Barr admitted that he and Deputy Rod Rosenstein did not review the underlying evidence used to create the Mueller Report before issuing their conclusions.

Barr has faced heavy criticism from House Democrats for his decision to skip the hearing including one Congress member’s performance art joke referring to Barr as “chicken.” House Judiciary Chair Jerry Nadler held the hearing and issued a statement on Barr’s nonappearance. House Speaker Nancy Pelosi also issued a statement on Barr’s actions both in the Senate Wednesday and the House Thursday claiming that Barr lied to Congress and committed a crime. There is no word yet on next steps in the House, but House Judiciary Chair Nadler has stated his priority is to get the full and unredacted Mueller report before deciding on additional proceedings.