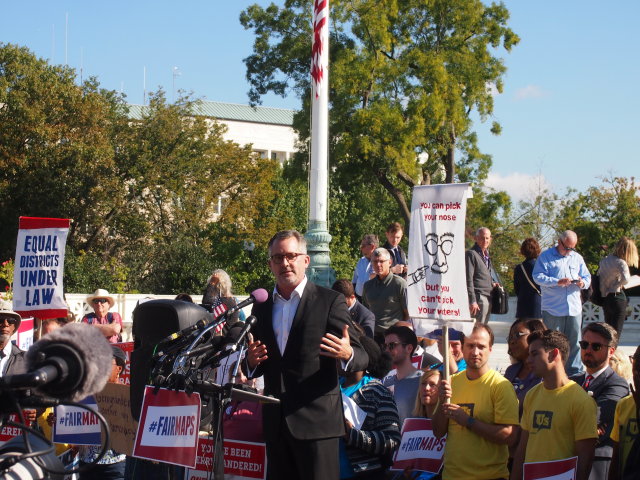 Gill v. Whitford [JURIST report] relates to the voting district map in Wisconsin where, according to the plaintiff, a particularly extreme form of gerrymandering had virtually guaranteed victories for Republican candidates for the next several decades. The court held [opinion, PDF] that the plaintiffs failed to demonstrate standing and did not express any view on the merits of the plaintiffs’ case—instead remanding the case to the district court to prove “concrete and particularized injuries using evidence” first.

“We leave for another day consideration of other possible theories of harm not presented here and whether those theories might present justiciable claims giving rise to statewide remedies,” wrote Chief Justice John Roberts.

“Our power as judges to ‘say what the law is’, rests not on the default of politically accountable officers, but is instead grounded in and limited by the necessity of resolving, according to legal principles, a plaintiff’s particular claim of legal right.”

The second, Benisek v. Lamone, affirmed [opinion, PDF] in a per curium decision a district court decision to wait for the Supreme Court’s ruling in Gill before further adjudicating the plaintiffs’ claims.

The case involved the sixth congressional district in Maryland, which was predominantly Republican until political designation shifted in 2011 when the district was redrawn. The petitioners, residents of the sixth district, allege Democrats engaged in partisan gerrymandering, redrawing the map to favor one political party over another. The petitioners sought for the redistricting of the sixth district to be invalidated with a preliminary injunction, but the district court put it on hold to await the Gill decision.

The court wrote Monday that the district court “reasonably could have concluded that a preliminary injunction would have been against the public interest, as an injunction might have worked a needlessly ‘chaotic and disruptive effect upon the electoral process.'”