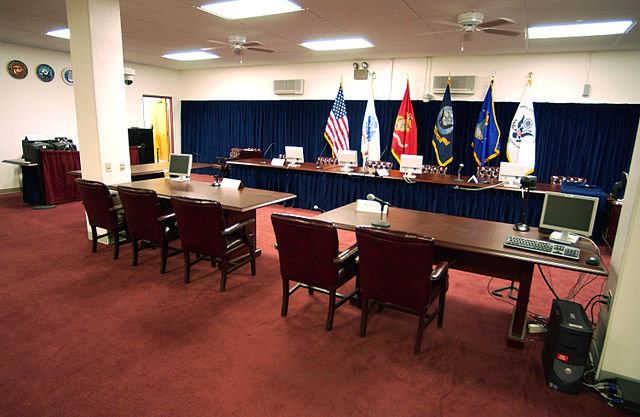 A judge for the Guantanamo military commissions on Wednesday held Marine Brigaider General John Baker, the chief defense counsel, guilty of contempt of court and sentenced him to 21 days confinement [transcript, PDF] and a fine of $1,000.

The conviction comes as a response to Baker’s refusal to testify about releasing three civilian defense attorneys [Navy Times report]—Rick Kammen, Rosa Eliades, and Mary Spears—from the case in mid-October, alleging the government was “listening in on their legal meetings,” thereby violating attorney-client privilege. The military judge presiding the case, US Air Force Colonel Vance Spath, ordered Baker to testify as to reasons for the attorneys’ removal, but Baker refused [Miami Herald report]. Baker claims he is given the unchecked authority to release defense attorneys for good cause in the war court rule book.

Spath also ordered the three civilian attorneys to appear at and participate in Friday’s hearing. Baker’s conviction will be reviewed, but he remains in contempt in his trailer at Camp Justice until convening authority and Pentagon senior official Harvey Rishikof has the opportunity to do so.

Spath’s decision Wednesday is the latest development in the case concerning the 2000 USS Cole bombing, In re: Abd al-Rahim Hussein Muhammed Al-Nashiri. In October the Supreme Court denied certiorari [JURIST report] in the 2000 USS Cole attack case, leaving intact the US Court of Appeals for the District of Columbia [official website] decision [text, PDF] that the military trial of Abd al Rahim al-Nashiri may proceed. Al-Nashiri was the first death penalty case to go to trial under the military commissions system, which was instituted after the September 11 terrorist attacks. Currently, Al-Nashiri is not represented by defense counsel experienced in death penalty cases, as required under the Guantanamo military commission rules. Al-Nashiri will challenge [ACLU report] this on Thursday in the US District Court for the District of Columbia.