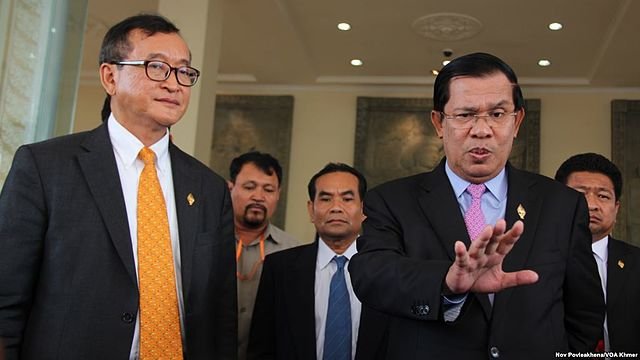 [JURIST] Cambodia’s National Assembly [official website, in Cambodian] on Monday passed a bill [official press release, in Cambodian] which prohibits political parties from being affiliated with convicted criminals. Commentators believe [WP report] the law is aimed at weakening the opposition Cambodia National Rescue Party (CNRP) [party website]. The party’s former leader, Sam Rainsy, recently resigned [BBC report] from the party after he was sentenced to two years in prison on defamation charges. As a result of the new law, Rainsy will no longer be able to be affiliated with the CNRP in any manner. The CNRP gained significant political strength in the 2013 Cambodian elections when the party took a total of 55 seats in the National Assembly, leading some to believe the defamation charges against Rainsy were politically motivated.

The lack of transparency in the Cambodian legislature and contention between political parties have caused international concern. In May the US Department of State issued a press release [JURIST report] expressing concern over the prolonged pretrail detention of five Cambodian activists. In January UN expressed concern [JURIST report] regarding the intimidation of opposition politicians and peaceful protesters in Cambodia. In November 2015 the UN Special Rapporteur on the situation of human rights in Cambodia, Rhona Smith, warned [JURIST report] that the increasing polarization of the political parties in Cambodia is reaching a breaking point. In October 2015 the UN Office of the High Commissioner for Human Rights expressed concern [JURIST report] over the “organized attack” on opposition politicians in Cambodia.