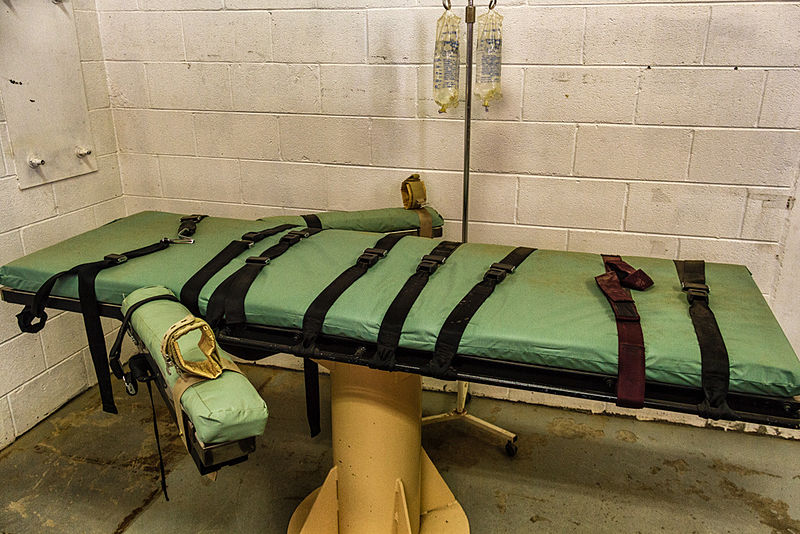 [JURIST] The legal status of the death penalty was upheld in three state referendums Tuesday. Oklahoma citizens voted [TIME report] in favor of State Question No. 776, which will add an explicit protection of the death penalty to the state constitution. Oklahoma will be the first state to have such a protection. In September executions in Oklahoma were put on a two-year hiatus so Oklahoma can reevalute [JURIST report] its lethal injection procedures following a botched execution and several drug mix-ups in the past two years. Also on Tuesday, Nebraska citizens voted [NBC report] in favor of Referendum 426, to reinstate the death penalty, which repealed last year’s decision to abolish it. Over 61 percent of voters were in favor of the referendum. California voters faced [LAT report] two contradictory propositions relating to the death penalty. Proposition 62, favored by slightly over 46 percent of voters, would have eliminated the death penalty. Proposition 66 will speed up the appeals process, so those convicted will spend less time on death row before their executions. Over 50 percent of voters favored this option, with some ballots yet to be counted. Those in favor of Proposition 66 said [advocacy website] it will give victims closure, save taxpayer dollars and protect law enforcement officers. Those against the Proposition said [LAT op-ed] shortening the appeals process increases the risk of executing an innocent party and will lead to added expenses.

Capital punishment [JURIST op-ed] remains a controversial issue in the US and worldwide. In May the US Supreme Court [official website] upheld a stay [JURIST report] of execution for Alabama inmate Vernon Madison. A few days before that a Miami judge ruled [JURIST report] that Florida’s revamped death penalty law is unconstitutional because it does not require a unanimous agreement among jurors to approve executions. In April Virginia’s General Assembly voted [JURIST report] to keep secret the identities of suppliers of lethal injection drugs. In February the US Court of Appeals for the Eleventh Circuit rejected [JURIST report] a Georgia death row inmate’s legal challenge to the death penalty. In January Mississippi Attorney General Jim Hood stated that he plans to ask lawmakers to approve the firing squad [JURIST report], electrocution or nitrogen gas as alternate methods of execution if lethal injection drugs become unavailable.