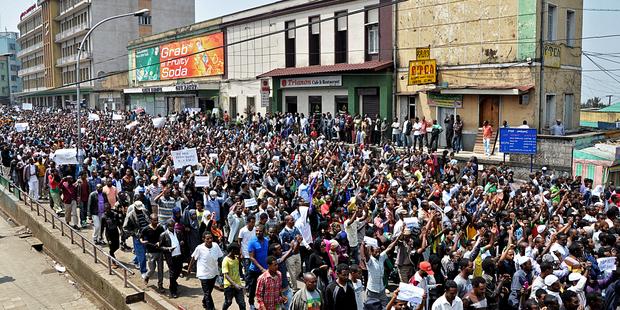 The UN Office of the High Commissioner (OHCHR) [official website] on Wednesday urged [press release] Ethiopian authorities to end the violence against peaceful protesters. These attacks by Ethiopian authorities have reportedly led to over 600 deaths in the past year. In response to this violence, the UN has called for an international commission and have requested that the Ethiopian government allow for them to investigate the protests and the violent tactics used against the peaceful demonstrators. Experts claim that there have been numerous allegations of mass killings and disappearances, thousands of protesters injured and tens of thousands arrested. There is also concern that many of those arrested have faced torture and ill-treatment in military detention centers. Another main concern is the use of national security and counter-terrorism legislation to target individuals who are exercising their rights to peaceful assembly. Protests began a year ago [UN News Centre report] in response to the Government’s plan to expand certain boundaries displacing farmers, along with the annexation of Konso Wereda into the Segen Arae Peoples Zone.

The conflict between the Ethiopian government and protestors has been widespread. Tensions increased over the past week when at least 55 were killed in clashes between police and protesters at a festival. Last month Ethiopia’s opposition leader and leader of the Oromo ethnic group, Tiruneh Gamta, demanded the release of all political prisoners [JURIST report] “regardless of any political stand or religion or creed.” The Oromo ethnic group, representing the largest group among the protesters, is largely credited with starting the protests last November when the government announced its plan to expand the capital into the Oromia region. Although the Oromos initially started protesting against what they viewed as a plan to remove them from fertile land in the region, the protests started taking on a different theme even as the government dropped its plan to expand the capital—one calling for the release of political prisoners [Al Jazeera report]. According to rights groups, at least 500 people have been killed and thousands arrested since the unrest began. In January several Ethiopian rights groups called on the international community to address the killing [JURIST report] of protesters.