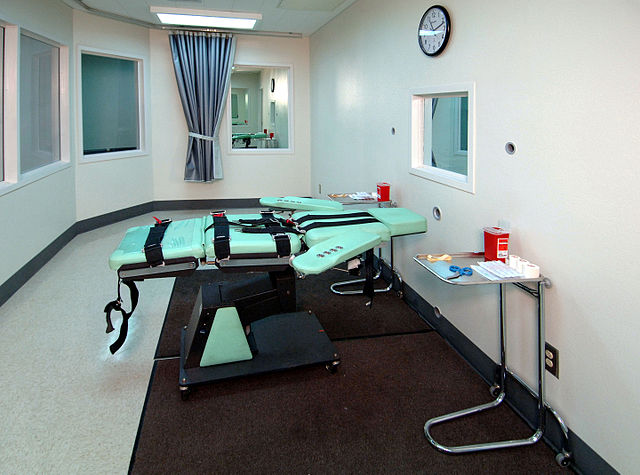 Oklahoma will have a two-year delay in lethal injections after the government board of the prison system declined to consider new execution procedures on Tuesday. After a botched execution in 2014 and numerous drug mix-ups in 2015, Attorney General Scott Pruitt [official website] refuses [press release] to set execution dates until new protocols have been approved. After the botched execution, legislators approved the use of nitrogen gas an an alternative to lethal injection. There are currently five inmates who have exhausted all of their appeals and are awaiting an execution date. This November, a question [resolution, PDF] will be placed on voting ballots asking whether or not Oklahomans want to incorporate the death penalty in their state constitution.

Capital punishment [JURIST op-ed] remains a controversial issue in the US and worldwide. Last month the US Supreme Court [official website] upheld a stay [JURIST report] of execution for Alabama inmate Vernon Madison. A few days before that a Miami judge ruled [JURIST report] that Florida’s revamped death penalty law is unconstitutional because it does not require a unanimous agreement among jurors to approve executions. In April Virginia’s General Assembly voted [JURIST report] to keep secret the identities of suppliers of lethal injection drugs. In February the US Court of Appeals for the Eleventh Circuit rejected [JURIST report] a Georgia death row inmate’s legal challenge to the death penalty. In January Mississippi Attorney General Jim Hood stated that he plans to ask lawmakers to approve the firing squad [JURIST report], electrocution or nitrogen gas as alternate methods of execution if lethal injection drugs become unavailable.